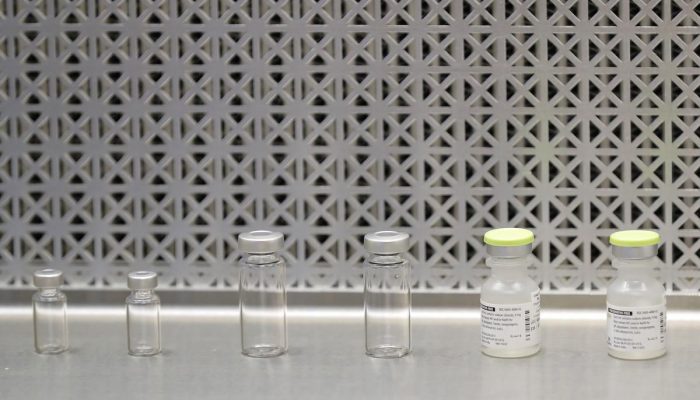 
In a tense scene from the 2011 movie Contagion, now making a comeback on streaming services as life imitates pandemic art, a heroic scientist pulls a sample out of a freezer at her lab late one night.

She injects herself and heads to a crowded hospital where her father, a doctor who continued treating his patients during the outbreak, is dying of a mysterious new flu-like virus.

“I’m testing my vaccine,” she tells him with a smile as she rips off her goggles and mask despite his objections and kisses his clammy forehead. By day 133 of the fictional timeline, less than five months after Gwyneth Paltrow’s patient zero contracted the deadly disease, officials are pulling birthdays in a lottery to determine who gets the vaccine first.

Unfortunately, in real life it will take more than a trial of one to find a vaccine for COVID-19, which has been widely heralded as the key to getting back to our pre-pandemic lives. The time frame of at least 12-to-18 months, mentioned by Dr. Anthony Fauci, part of U.S. President Donald Trump’s coronavirus task force, at a televised meeting in early March, has become a benchmark in the race to find it.

That’s just an estimate and not the start of a clock. But it would be the fastest development of a vaccine in human history. There are a few things that give some scientists hope it could happen, if we get lucky, from advances in science, to infusions of cash, to manufacturing vaccines before we even know if they work. There are also plenty of real challenges.

Twelve-to-18 months is an “incredibly optimistic timeline,” said Natasha Crowcroft, director of the Centre for Vaccine Preventable Diseases, and a professor at the Dalla Lana School of Public Health. “Nobody’s done this before.”

Under normal circumstances, new vaccines take several years to develop. The fastest ever was for mumps, at four years.

“I don’t think it’s wrong to be optimistic, and I don’t think anybody really knows the answer,” Crowcroft added. According to the World Health Organization, as of April 20 there were five vaccines in clinical trials around the world, including the first in human trials, a messenger RNA candidate from U.S. biotech company Moderna. There are also 71 candidates at the preclinical stage.

Back in January, before COVID-19 even had a name, Chinese scientists were able to quickly sequence the genetic code of the virus, thanks to “leaps forward” in science, said Crowcroft. That gave the world a big head start.

Researchers are also trying to make some of the usual steps of a clinical trial happen “in parallel,” she said.

Clinical trials usually progress in measured steps to examine safety and effectiveness, starting with animals and then moving to humans in bigger sample sizes and different age groups, before a vaccine or drug can get approval and then be manufactured and distributed.

It’s usually “so expensive to take a vaccine through all the steps.” Pharmaceutical companies “don’t want to spend money on a step they might not need if it fails a previous step,” said Crowcroft. Many vaccines get caught in the “valley of death,” a promising idea from researchers without the money to take it through a trial. But given the global emergency, big money is flowing from governments that are taking on that risk for the public good.

Scientists at Oxford University in the U.K., with the help of funding from the British government, jabbed their first volunteer in the arm this week in the first phase of a human clinical trial. Their vaccine contains the genetic sequence of the club-shaped spike protein on the outer coat of SARS-CoV-2 and uses a harmless chimpanzee virus to deliver it, according to news releases on their website. The hope is that this will trick the body into thinking it has COVID-19 and trigger the immune system so that it will be ready to attack if it comes into contact with the actual virus.

The team was actually already working on a vaccine for “Disease X,” the next big one, without knowing what that would be, so they were easily able to pivot, lead researcher Sarah Gilbert told The Lancet.

At the same time, production of the vaccine is being scaled up to be ready for larger trials, and future rollout, if it works.

Philanthropist Bill Gates has the same idea on a bigger scale. He told the Daily Show’s Trevor Noah in early April that the Gates Foundation would fund factories for seven of the most promising COVID-19 vaccine candidates, even though it would mean throwing away billions on vaccines that don’t work out.

The Gates Foundation did not provide more specifics on where the factories might be or what vaccine candidates they’d produce when contacted this week by the Star.

But even with these time-saving measures, there are still many unknowns.

A major one, said Claire Cupples, former dean of science and professor of molecular biology and biochemistry at Simon Fraser University, is that we still don’t understand how strong the immune response is to the virus. People who’ve had it should develop antibodies and have some type of immunity. But we don’t have enough science to prove that because the virus is so new.

“The immune response might just not be very strong at all, so that really is quite a concern in my mind,” she said.

“It’s going to be a challenge to get a strong response from a vaccine, and would that be enough to protect people?”

Because there’s still so much we don’t know, it’s possible that strengthening the immune response “might actually make it worse,” Cupples said.

While coronaviruses are “more accurate” at replicating themselves than, for example, flu, which keeps mutating so much that we need a new vaccine each year, there is still no vaccine for the coronaviruses that cause severe acute respiratory syndrome (SARS), Middle East Respiratory Syndrome (MERS), or common colds.

“Certainly the fact that other coronaviruses keep on coming back year after year, and presumably we don’t have a good response to them, is another thing that suggests that getting a vaccine might be really difficult,” Cupples said.

Never miss the latest news from the Star, including up-to-date coronavirus coverage, with our free email newsletters

Even in an emergency, we still need to do our due diligence and vaccines are held to a higher standard because they expose healthy people to risk, rather than offering sick people without options something that might help.

“If we turn around a really crummy vaccine and make people sick, that’s going to set back vaccine acceptance for decades,” she said.

This has happened before. In 1976, a vaccine for swine flu was pushed through in the U.S., even though a feared epidemic never happened. The vaccine caused Guillain-Barré syndrome, a rare condition that causes nerve damage in about one in 100,000 people.

Trudo Lemmens, professor and Scholl Chair in Health Law and Policy at the University of Toronto, said it’s definitely acceptable to prioritize clinical trials of a vaccine in a pandemic and to speed up the review process by health authorities. But it’s important to make sure “we’re not shortcutting the important steps of evidence gathering that have to take place.”

Clinical trials should be assessed by independent monitoring committees that can examine data and research. There should be full transparency, including with preclinical data, which is usually kept secret.

If a vaccine is rolled out, researchers should continue collecting and sharing data so they can correct any issues that arise, he added.

Even if we do get to that point, said James Tiessen, an associate professor and director of Health Services Management at Ryerson’s Ted Rogers School of Management, there’s plenty of work still involved.

Canada has “very little, if any, vaccine production capacity” and would have to rely on other suppliers, as it does for the flu vaccine. But officials would probably be able to manage, he said.

We could end up with not just one vaccine, but two or three, one for older people and one for others, for example. So “the challenge is just going to be volume” and “determining who to give it to.”

Tiessen said he’s been impressed so far with the “unprecedented amount of worldwide co-operation” on the science, “which is ironic given our borders are otherwise closed.”

That’s also something that makes Cupples hopeful, “the fact the government, industry, and academic institutions are working together, that they’re publishing their results quickly and not behind paywalls.”

Even so, it’s entirely possible we may never find a vaccine.

We don’t have one for HIV, for example, which first appeared in the early 1980s. That’s why it’s important to also continue looking for treatments such as antiretrovirals, Cupples said, and better understand who gets very sick and who gets mild or no symptoms (aside from factors like age and other medical conditions).

All of these things can be done at the same time as other teams of scientists continue to work on dozens of fledging vaccine candidates.

It’s a good thing to have so many at this point, added Crowcroft.

One vaccine could work 100 per cent of the time, but have side-effects, while another could be 70 per cent effective, but safer.

“At this stage we’re going so fast, what we really need is a lot of choice,” she said.

About the Author: May Warren