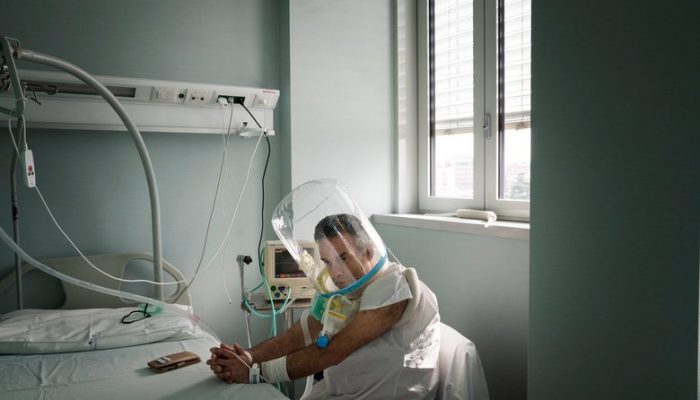 Carlo Leonti, 51, has been fighting COVID-19 for days. He is treated with an oxygen helmet that helps him breathe at Monza’s hospital’s pneumology department.

The Cost of Surviving the ICU

Can Pets Contract the Coronavirus? What About the Tiger?

“I Can’t Unsee the Bodies in the Trucks”

Slate is making its coronavirus coverage free for all readers. Subscribe to support our journalism. Start your free trial.

The first thing Damiano Rizzi told me was the story of a woman who was about to die. It wasn’t Rizzi’s own story—it was a story that another doctor had shared during a staff meeting. That doctor had been standing beside her patient’s bed. Before the patient closed her eyes, she stretched out her hand and placed it on the plastic visor that shielded her doctor’s face, as if looking for a last, desperate human touch.

Rizzi is the president of the health care NGO Soleterre, which works on human rights issues around health care. He’s also a psychologist at the San Matteo hospital in Pavia, one of the first cities affected by the COVID-19 emergency in Italy. He uses that doctor’s story as a portrait of what is happening in the wards of thousands of hospitals around the world. “This virus has created a very strong sense of loneliness,” he says. “Doctors covered from head to toe in synthetic suits are the only link to real life for intubated patients, or imprisoned ones in oxygen helmets, often unable to say a word.” For this reason, he and his team are on the front line, alongside the health personnel in the COVID-19 and intensive care units of the San Matteo hospital, to try to bring psychological support to this hell. “We have been on the war front, in the Balkans, in the Donbass in Ukraine, in the refugee camps in northern Uganda. When the coronavirus emergency broke out, I felt it was important to be here.”

There are many associations of psychologists who offer telephone consultations to health professionals, but almost no one is in the ward by their side because of the risk of infection. Right now, in Lombardy, the Italian region most affected by COVID-19, the mental well-being of the patient and the caregiver is being treated equally. This emergency has kept health care workers in a state of continuous trauma for over a month. “They are confused. Many find themselves doing a job they have never done, far from their departments,” Rizzi says. “Some experience survivor’s guilt, a classic for those who live through tragedies.” They say they feel helpless, they are seeing many more people dying than they are used to seeing, they still don’t have the medicine to cure the disease, and sometimes they don’t even have the right protection. They are afraid of getting sick or infecting their loved ones.

Every morning, the doctors who work in the COVID-19 areas of San Gerardo Hospital in Monza do a briefing on their plan for the day to share data and general information with the medical director, Mario Alparone.

Often, COVID-19 leads us to the metaphors of war and trenches. According to Rizzi, that is because we have no other words to explain this situation that has blown up our certainties. But he says that in some cases it is even worse than armed conflict. “During a war there are the battles that require a maximum state of mental alert, but then there is time to relax, or times when someone else goes to the front line. Here, on the other hand, there is a constant stress: during the battle in the wards, but also at home, where they are afraid of bringing the virus into the family.”

Many doctors and nurses have decided to move away from loved ones, such as Pierluigi Viale, the director of infectious diseases at Sant’Orsola-Malpighi Polyclinic in Bologna: “I have been living alone at my mother-in-law’s house for several weeks. She moved in with my wife and our 4-year-old son. I come back late from work. Sometimes I stop by under their balcony and blow a kiss from the car. My son yells, ‘Daddy, be careful!’ And I go away with my heart in pieces. It is not easy to live this moment without them, without a hug. But it’s for our own good.”

One of the dozens of doctors who work in Monza’s hospital in personal protective gear.

Alone, without families by their side and without the comfort of a priest, the faithful rely on a prayer.

While in America and other countries, the virus still on the rise, the advance of the pandemic in Italy appears to be slightly slowing down. The cases of the total infected are more than 140,000, and new infections are decreasing. Of these 140,000 cases, 10,000 are health care workers, twice as many as those in China. One figure is particularly worrisome: 100 doctors have died since the outbreak. One hundred doctors in just a month. They died from working on the front line; they died because without the right protective devices it’s easier to get sick. And the problem is not solely Italian. In Spain, 14 percent of the infections are among health workers. In a major hospital in New York City, more than 200 workers have fallen sick. Two nurses have already died there.

Isabel Fernandez is a psychotherapist who specializes in emergencies. She is at the forefront of listening to health personnel. Knowing that a colleague from another department or from another hospital is infected, or seeing a colleague die, creates a great trauma in health workers, she says: “It becomes an image that creeps into your head and reminds you that the next one could be you. COVID-19 has mixed the working dimension with the private one: As a doctor, you can easily become a patient.”

Giulia is a nurse at Monza’s hospital. Today, she is helping Carlo with physical therapy as he continues to recover.

This virus fatigues and scratches the souls of everyone, but those on the front line experience this more than anyone. Two Italian nurses have died by suicide in the past few weeks. Fernandez says that not only could there be extensive cases of PTSD, but there will also likely be episodes of depression, anxiety, and irritability, as well as difficulty returning to life as before: “We are trying to give immediate support to relieve and prevent—we want to be the place to decompress. But the big call for help will come only at the end of the emergency. Now doctors are very focused on doing and have little time to listen to their feelings,” she says.

Rizzi and his team meet the health care staff during group meetings. Any individual sessions they are able to do tend to happen in the hallways of the hospitals, “between one visit and another,” whenever the doctors have time. “This is why our [physical] presence is important. We try to be there when they need it,” he says. Some doctors cry because they feel listened to and less lonely; others cry because they could not save their last patient. “But they all tell us that the most difficult thing is not being able to have human contact. People are intubated, or under large oxygen helmets. Those who do well have a mask,” says Rizzi. Doctors have the feeling that they are only dealing with bodies. They lack the history of these patients. “At our hospital, we try to reconstruct their history, we speak with the families, the local parish, even with the mayors. And we help doctors communicate with loved ones, even the most painful news,” Rizzi tells me.

There is another aspect of COVID-19 that leaves doctors speechless—the speed with which everything changes, how quickly vital parameters plummet and the person dies. “A patient you thought was getting better gets worse unexpectedly in five minutes, This creates a sense of helplessness,” says Alberto Pesci, the head of pneumology of San Gerardo Hospital in Monza, which currently has about 500 COVID-19 patients. This speed creates the sensation of chasing the virus, with no hope in sight.

Monza’s hospital houses 500 patients with COVID-19. Compared with other Lombardy cities, it boasts the highest number of recovered cases. The hospital has undergone a complete transformation to cope with the emergency, changing entire wards dedicated to intensive care.

“There are times when it seems that I cannot do enough. There are patients that, when I leave for the evening, are gone in the morning,” says S., a nurse from Monza. S., who asked for anonymity, has just returned to work after being infected with COVID-19 herself: “I was looking forward to going back to the wards, despite the fear of getting sick again.” Hospital management sent an email to all staff saying that those who didn’t feel up to it could step down. “But none of us did,” S. says. “There are times when we cry or feel bad, like when in one shift we lost five people, but then we get up and go on, one day at a time.”

This is probably the sense of strength and love that Rizzi speaks of. He tells us that on one side there is the horror of death, “but on the other we are experiencing a moment of great humanity.” In the middle of all of it, he’s also witnessed something rare: “I’ve never seen such immediate actuation, a symbiosis toward a single goal: saving lives.”