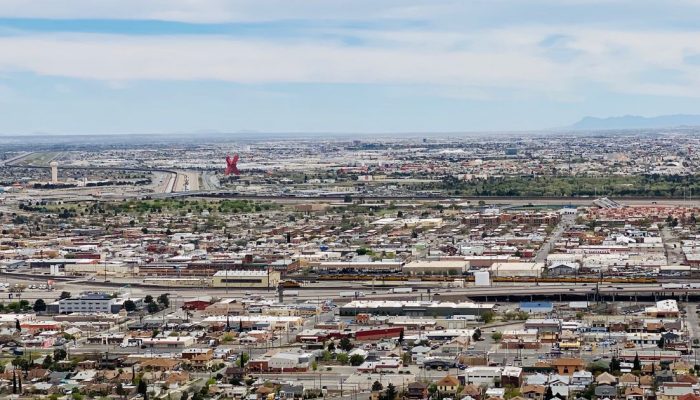 
EL PASO – As Reynaldo Ochoa walked toward the international bridge to cross back into Juarez, he thought about Texas reopening for business, nervous about what will happen. Or not happen.

“We all want to get back to normal,” he said. “But nothing will be normal again, not anytime soon.”

Across the border in Ciudad Juarez, Laura Cobos was shopping for essential food items like milk, eggs, and meat — all the prices are slowly increasing — and taking advantage of the trip by dropping off plastic items at the supermarket’s recycling bin. With a daughter studying in Austin who refused to come back home, she worries that the Texas reopening might lead to chaos.

“I think life is more important than money. I know there are people, especially in Mexico, that live day by day,” Cobos said, “but I don’t think the U.S., with the support it has, should reopen because it’ll become a big problem.”

Laura Cobos, 55, waits in line outside of S-Mart, a supermarket chain Thursday, April 30 in Ciudad Juarez, Mexico. Cobos’ daughter currently lives in Austin and she worries that the partial reopening of Texas’ economy will “become a big problem.”(Valeria Olivares / Special Contributor)

Gov. Greg Abbott’s partial reopening of Texas on Friday is testing the synergy between El Paso and Ciudad Juarez, two communities where authorities insist they’re weeks away from meeting benchmarks for easing COVID-19 health restrictions. Local leaders in both cities say the virus is just now beginning to sink its teeth in, and reopening too much, too fast could lead to a spike in infections later in May.

On the streets and in government and businesses, worry has set in that medical institutions and workers are being put at unnecessary risk, while whatever progress was made to slow down the spread of COVID-19 may be erased.

Hospitalizations in El Paso are rising dramatically, with people in ICU with COVID-19 at the highest levels yet.

“So we’re going into this opening, blind, because we’re making decisions without understanding the full data and the full impact of what is happening here, or what’s really going on in Juarez and that’s horrible,” said El Paso County Judge Ricardo Samaniego. “Think of this area not as a border, but as one big community because that’s how close we are to each other. It’s a very symbiotic relationship, and so, because of that, that’s very concerning.”

What ails El Paso, healthwise and economically, ails Juarez, too.

As the Texas reopening unfolded Friday, confusion reigned on both sides of the border. Mexican officials urged Juarez residents not to cross into Texas. Late Thursday, local El Paso leaders led by Samaniego announced an amendment to Abbott’s order, banning gatherings of any kind and “requiring” everyone to wear face masks. He acknowledged that “mandatory” has limitations, conceding Abbott’s phased in orders call for no penalties for those who don’t comply.

“The governor’s orders supersede anything locally that we’ve done. The line in the sand just faded pretty quickly on that one,” he said. “My message of containment. My message of supporting public health has now faded completely; it’s not that strong anymore because Dad said you can go out and play and mom said no… we’re tiptoeing around the governor.”

Samaniego called Abbott’s directive a “pretty good order, if we were 30 days from now, but it’s not a good order right at this very moment… There are dynamics on the border that are not being taken into full consideration.”

Testing in El Paso lags 40 percent behind the nation, while in Juarez, only recently the number of people being tested grew to 50 per day.

With the approach of Mother’s Day – a celebration that traditionally sparks a sharp increase in border crisscrossing – the worries are growing.

Chihuahua’s top health official, Dr. Arturo Valenzuela, on Friday called on Juarez residents not to take Texas’ reopening as normalizing life for the rest of the border. Mexican shoppers account for billions of dollars in revenue for local border economies.

“The reopening of Texas’ economy does worry us,” Valenzuela said during a virtual press conference Friday. Texas is “already in another stage; they’ve already crossed the stages that we are only arriving at. They are already seeing, so to speak, the light at the end of the tunnel.”

Chihuahua health officials are feeling the heat from the U.S. State Department and powerful U.S. senators.

Coronavirus has left a swath of death in many of the U.S.-owned plants.

U.S. Ambassador Christopher Landau warned, via Twitter, that Mexico risks losing the very jobs that fuel economies in Juarez and other border Mexican cities. The timing of that seems odd, as the pandemic seems to have brought President Donald J. Trump and Lopez Obrador closer.

The Mexican president even mused about making his first visit abroad in June or July to “personally greet” and thank Trump, who just last year was threatening to impose devastating tariffs on Mexicans exports.

U.S. Rep Veronica Escobar, D-El Paso, called the supply chain ‘critically important,” but took issue with the Trump administration’s “bullying” of Mexico, saying she has talked to Mexican officials who complained that the U.S. is unilaterally making “its designation for what is essential in manufacturing, sort of dictating to Mexico. This is one of those critical moments where bilateral communication and collaboration is monumentally important, particularly for border residents.”

More than 400,000 people are employed by the maquiladora industry. Now, Valenzuela said, “We’re in the most difficult part of the pandemic.” State officials say they expect to hit the pandemic’s peak in the coming weeks, possibly by mid-May.

On Wednesday, Juarez hospitals reached a capacity of 70 percent, as the city hit a total of 127 patients hospitalized due to COVID-19.

Chihuahua’s Gov. Javier Corral said that current social distancing orders will continue through May, calling the measures “crucial” for the state. He pointed to Juarez, which he said is responsible for 85.3 percent of the state’s COVID-19 deaths and the highest number of confirmed cases, pleading for residents to restrict unnecessary movement and stop crossing into Texas.

“The case that worries me the most … is that of Ciudad Juarez, where mobility is still going strong, there’s lots of presence in the streets, lots of traffic and the people continue going downtown to shop,” Corral said.

The border is closed to non-essential traffic, but the definition of ‘essential’ has largely been left to the people who decide to cross.

People line up outside of S-Mart, a supermarket chain, Thursday, April 30, under the desert weather, which has recently been reaching more than 90 degrees. Local supermarkets have only recently begun policing the amount of people allowed in at a time.(Valeria Olivares / Special Contributor)

Local supermarkets in Juarez have only recently started limiting the number of people who can enter at one time, leaving people to line up under the glaring, desert sun, sweating behind their face masks. Shoppers seem to practice social distancing, except that when they are packing their own food, they’re forced to gather tightly over small tables.

Signs of any normalcy are far away on both sides of the Rio Grande. City stalwarts like Chico’s Tacos remained closed Friday, as did upstarts like Montecillo Records. Owner Eric Cabral, 34, said his shop is too tiny for social distancing. Therefore, he’ll remain closed and focus on online retail and deliveries, getting his message out through social media.

“It’s hard. It’s hard,” said, but added, “I think with music everything is better.”

Meanwhile, in what appears to be a desperate move, the Juarez mayor has allowed the use of a helicopter to spray a form of diluted bleach over the city, anticipating more Texans will return to their old stomping ground over the weekend with a false sense of security.

Samaniego, the county judge in El Paso, said he didn’t want to sound harsh about his neighbors, but he said the helicopter move “shows the desperation of trying to address, at least imagewise, that it’s going to be OK for people to go there, to Juarez. But bleach doesn’t work. The virus is passed by saliva and other factors. We can’t stop the virus cold, on either side of the border.”