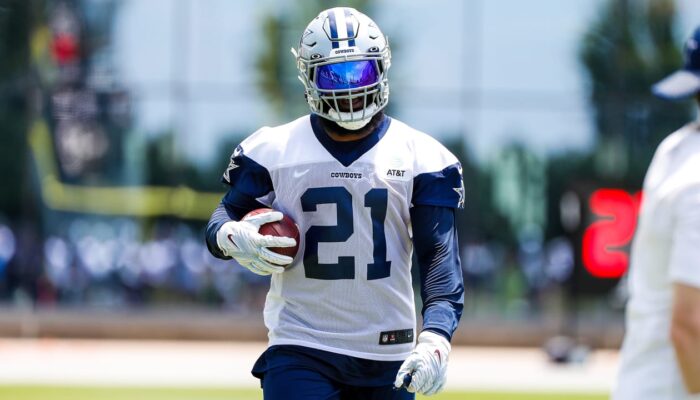 That he’s hit that age when running backs in the NFL start to degenerate.

That analytics suggest he ain’t what he used to be.

Man, use your eyes instead. What you see actually taking place on the field.

And here is what these eyes are telling me when looking back at the 2020 NFL COVID-laced season.

First of all, the Cowboys offensive line play last year was rather pathetic compared to what had been taking place up there ever since the Cowboys drafted Zeke in 2016. That includes what they were throwing out there as recently as 2019 with Tyron Smith at left tackle, Connor Williams at left guard, Travis Frederick returning to center after missing 2018 with Guillain-Barré Syndrome, Zack Martin at right guard and La’el Collins at right tackle.

And what would you except from a unit playing the entire season without Collins, playing 14 of 16 games without Smith, having to play the entire season without the retired Frederick and without Martin for six games? That’s missing three perennial Pro Bowlers, that included one of the best offensive tackles in the game, maybe the best offensive guard in the game, one of the best centers in the game and the other tackle poised to earn his first Pro Bowl in 2020 after producing his best season in 2019.

What would you except starting your backup center? Guard Joe Looney, and then after his sprained knee injury, turning to fourth-round draft choice Tyler Biadasz, he of all of 15 NFL snaps at that point, and then, even after showing significant improvement over five games, he goes down, too, with a strained hamstring.

Oh, uh, sorry, and did I mention the starting quarterback? The guy the Cowboys decided to sign to a four-year, $160 million deal this past March that included a $66 million signing bonus? Guy by the name of Dak Prescott? He went down for the season in the third quarter of the fifth game.

Like, think about this: If you are an NFL defensive coordinator, and you know the Cowboys offensive line is not nearly what it used to be, and you aren’t solely worried about Andy Dalton beating you – and he even misses two starts and half of a third, the Cowboys having to start a seventh-round pick and in the other game a veteran for the first time in his career – who you worried about beating you?

Seems pretty logical to me to make doubly sure this guy doesn’t beat me. You, too, I’m betting.

Think some of that, if not all of that, had something to do with Zeke being held to 979 yards rushing last season while averaging just 4.0 yards per carry?

Even head coach Mike McCarthy, in a veiled way, made mention of these injuries when asked where he thought this offense is right now.

“Really, just having everybody out there is the biggest change,” McCarthy said. “I think the development of depth on offense is the biggest development I’ve seen. Besides Dak, the three other quarterbacks are getting team work that’s great experience they normally don’t get. The tackles are getting a lot of team work, with LC (and Tyron) not in the team periods. So I think our depth on offense is clearly better than it was last year.

“Just the health of that unit, to me, is going to be the biggest upgrade.”

And who knows what the aftereffects of testing positive for COVID-19 in the offseason might have had on his strength and conditioning, something called long-haulers we eventually discovered.

Look, not making excuses here. Just pointing out hardcore facts contributing to the Cowboys rushing for their fewest yards since the 1,504 of 2013 and third fewest over the past 12 seasons.

Look at this, too: If the Cowboys offensive line was so bad that the team’s quarterbacks were sacked 44 times – second most in the past 15 seasons – then what makes you think that injury-depleted, highly inexperienced group was any better run blocking?

But if it’s numbers you want to support my case that Zeke isn’t falling off the face of the NFL landscape, check out of couple of these:

In the two games Tyron started at left tackle, Zeke rushed for 96 in the opener against the Rams and then 54 on just 12 carries (4.5 avg.) against Cleveland.

Then this: In the five games Dak started, in three of those Zeke gained 96, 89, 91 yards and rushed for five of his six touchdowns. After that, the 103 against Minnesota and the 105 against Philadelphia in Game 15 wound up being his only 100-yard games of the season. And guess what? The 103 vs. the Vikings just happened to occur when the Cowboys finally decided to move Martin from guard out to right tackle before he went down for the season the next week against Washington

As for how he looks so far this offseason, and we have only like eight full practices to go by, McCarthy gives Elliott his stamp of approval.

“I think Zeke looks great,” the head coach says when asked. “He’s a pro’s, pro. I’ve been impressed with Zeke from Day 1. He’s been here pretty much the whole time. He sits in the front row. He knows the offense in and out. He asks questions.

“I think he’s had an outstanding offseason.”

He looks outstanding to me, too. Moving effortlessly. And not just in the practices we get to watch, but also during the strength and conditioning training that had been going on previously. And as we’ve found out recently, Zeke has even been doing some extra training on the side with running back specialist Josh Hicks.

Then again, don’t just take my word for it.

“Zeke looks great,” Dak said. “He’s in the best shape of his life. Looking fast. Everybody’s seen the clips of him working out independently with his running backs coach. His cuts, just how explosive he is. I’m excited to have a full year with him again and getting him healthy throughout the whole season.”

Because that’s what these eyes are seeing.