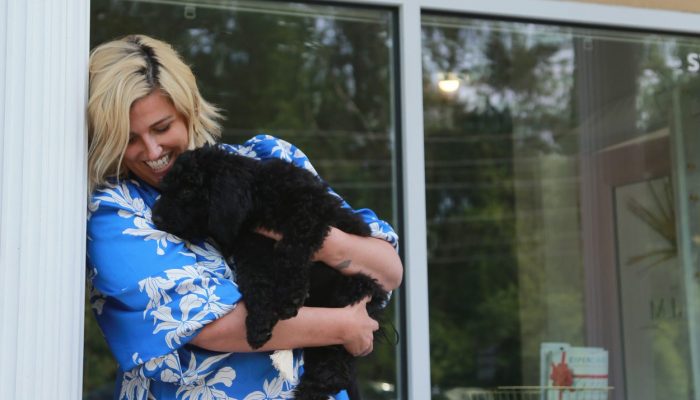 
Like a lot of people this past year, Megan Gillespie adopted a pandemic puppy. The two-month old Portuguese water dog she named Mowgli is not just a new companion for the Richmond Hill salon owner, though. More than a year after she tested positive for COVID-19, Gillespie is still navigating lingering symptoms of the virus. She’s planning for Mowgli to be a service dog.

“I’ll push myself through the week here,” Gillespie said on a recent morning at The Palm Salon. “And then I’ll go home on the weekends. And I will just stay in bed. So he is helping me not do that.”

In Savannah, Shirley James is still dealing with the aftereffects of a COVID infection, too. Normally a go-getter, the publisher of the Savannah Tribune and longtime organizer of the city’s Black Heritage Festival isn’t back to normal after being one of the first people in Savannah to test positive for COVID. A day of household chores now leaves her spent.

“I still do the dry coughing,” she said. “Now I’m on an inhaler twice a day. If you hear my voice, it’s kind of raspy. That doesn’t go away.”

These women, both previously healthy and active, neither hospitalized for COVID, are just two of what’s likely 100,000 statewide who researchers consider COVID “long haulers.” An article in the British Medical Journal put the number at about 10% of all people who test positive for COVID-19.

The Centers for Disease Control and Prevention defines long COVID as “a range of symptoms that can last weeks or months after first being infected with the virus that causes COVID-19 or can appear weeks after infection.

“Long COVID can happen to anyone who has had COVID-19, even if the illness was mild, or they had no symptoms. People with long COVID report experiencing different combinations of the following symptoms: tiredness or fatigue, difficulty thinking or concentrating, headache, loss of smell or taste, dizziness on standing, fast-beating or pounding heart, chest pain, difficulty breathing or shortness of breath, cough, joint or muscle pain, depression or anxiety, fever, and symptoms that get worse after physical or mental activities.”

In January the National Institutes of Health announced a diagnostic name: Post-Acute Sequelae of SARS-CoV-2 infection or PASC.

More:COVID cases trend down but vaccinations, key to pandemic’s end, are stalling in Coastal GA

Long haulers have come together on social media, including large Facebook groups like the 168,000 member Survivor Corps. They’re getting more attention from primary care doctors and from interdisciplinary teams at advanced medical centers like the COVID long haulers clinic Gillespie attends at Emory. They want people to know that COVID can affect you long after the virus itself is gone.

An early case that lingers

James, 74, received her COVID-19 diagnosis in late March 2020, making her one of the first positives recorded in Chatham County.

She’s uncertain where she contracted the virus it though she has a list of possibilities. In late January 2020 James traveled to Toronto in her role as a commissioner for the Savannah/Hilton Head International Airport. Returning home she attended a state conference for her sorority, Delta Sigma Theta. Then it was right into the thick of the city’s Black Heritage Festival in February.

COVID wasn’t on the local radar yet. Even though she had what in retrospect could have been COVID symptoms, including digestive issues, it wasn’t until she was having a follow up in late March 2020 with her family practitioner, Memorial’s Dr. Obayode Ayewa, that he suggested a COVID test. It was positive.

Shocked but not afraid, she isolated herself at her Sylvan Terrace home, staying separate even from her husband of more than 50 years, Robert.

“I started walking five minutes a day,” she said. “And you know, I increased it to 10 minutes, I finally got up to about 25 minutes a day. And I thought I was doing well.”

But months later she still fatigues easily, has a cough and uses an inhaler. And she has mysterious limb pain.

“So I’ve been to two or three neurologists, but I still get this cramping in my feet,” she said. “And sometimes, even at night I’ve gotten to the point where my legs would be so painful that if I got up I could hardly walk.”

Vaccinated in January, she’s still careful, wearing masks and gloves and avoiding crowds. COVID isn’t in the past tense for her.

“You survive it,” she said. “And then you have the long-term effects.”

For Gillespie, long COVID has been even more of a trial. Previously a spin class and Pure Barre enthusiast, she’s barely touched the Peloton bike she ordered before she got sick on March 29, 2020.

Like James, she was never hospitalized with COVID. But like James, she’s not back to normal. Far from it. For Gillespie, 37, even driving can be a challenge.

“On Easter, I couldn’t even get to St. Simons without stopping because I was in so much pain,” said Gillespie who is single and lives by herself.

Her brain fog has lifted. She no longer struggles for simple words like “door knob.”

“I remember one time I was like, “What is that thing you go like this (twisting motion) to  get you to another room?'” she recalled. “I don’t do that anymore.”

But a host of other symptoms haven’t resolved. She shared a four-page chronology of month-by-month symptoms including nearly a dozen labeled “issues ever since recovery started in April 2020.” It includes shortness of breath, night sweats, achiness in her arms, muted taste and smell and never feeling well rested.

She’s roller-coastered through the months, with November a bad one for migraines, then a relatively healthy December giving way to excruciating joint pain in January.

Her primary care physician, Dr. Russell Lake of St. Joseph’s/Candler Primary Care in Pooler, has been supportive and collaborative, keeping abreast of what’s working for other post COVID patients.

“I went to him just in tears one day,” she said. “Because I was in so much pain here that I had to cancel my day. And I was just stepping in back (of the salon) to cry every now and then because everything hurts so bad.”

Shortly after that he called her to recommend a high blood pressure drug, clonidine, that a local pain management specialist had used successfully to treat pain in other post COVID patients.

Lake treats about 20 COVID long haulers. Persistent fatigue and taste and smell disturbances are their most common symptoms, followed by vague neurologic symptoms, like numbness and tingling, he said in an interview.

Truong said several of his initial expectations about long haulers were wrong.

“I assumed that how severe your initial disease was put you at risk for having long haul symptoms. That doesn’t seem to be the case,” he said in a phone interview. “I assumed that it would be all over the board in terms of symptoms. But patients are coming in with a very similar symptom patterns, including fatigue, nonspecific chest pain, shortness of breath, and brain fog or memory loss.”

Reports of the vaccine helping long haulers are still being investigated, Truong said. Wary of it triggering new inflammatory responses in her body, Gillespie hasn’t had the vaccine. James did but didn’t see her long COVID symptoms improve.

“I think there’s some whispers out there about the vaccine helping patients,” Truong said. “I am really hopeful that that’s the case, I just haven’t seen it in my clinic. I think that maybe I have 10 or 15 patients who have had post COVID syndrome, and that have gotten their vaccines. Maybe two of them got better, one of which stopped seeing me because she felt so much better and back to normal afterwards. But the vast majority of them don’t seem to have that response.

“And so I think, again, like everything with this pandemic, and this disease, we are having a hard time figuring out which patient population it is that responds well to the vaccine and which doesn’t respond well to the vaccine.”

For Gillespie, the patterns they do detect are a source of hope.  Last year she had a stroke-like incident where her left side went numb. It ultimately targeted her ulnar nerve and left her hand so weak that she drops combs sometimes as she’s styling hair.

“So I was telling the doctor this at Emory, and he kind of perked up,” she said. “He said, ‘you are the fourth person to tell me that in two days.'”

The clinic sees more women than men, but Truong isn’t sure if there are more female long haulers or if women are more likely to seek treatment. Patients range from 18 to 80 with an average age around 50.

Though some patients have pre-existing conditions such as diabetes, Gillespie and James fit a typical profile of long haulers who were healthy and active before COVID. The clinic treats triathletes and marathon runners, Truong said.

“That’s a population who used to be able to run 26.2 miles and now can only run barely one mile and can’t breathe,” he said.

The clinic has already given Gillespie some relief. For months she’s had an uncontrollable gasp she called her “velociraptor sound.” Lately that had lost priority over pain from joints that sometimes felt like they were in a vise grip and a sensation of heat in her bones.

The clinic treated her and others with  Zyrtec and Pepcid.

“And that has significantly helped with my pain, my breathing,” she said. “So, I rarely do that (gasping). But if you miss a dose it comes back.” So does the joint and bone pain.

Other patients with a similar cluster of symptoms have also felt “miraculously better” on this combination, Truong said. Discoveries like that feed into the clinic’s research.

“We’ve collaborated with the clinic over at Grady Hospital, to put together our databases and see what kind of patterns we’re seeing,” Truong said. “We’re also communicating what may work in  some patients and  what doesn’t. And trying to figure out if there’s a signal there as to which patients we should try x therapy on.”

Both Gillespie and James would like to see more resources for long haulers locally, both in the form of a support group, and in terms of a interdisciplinary clinic in the Savannah area.

“I think we’re just not grasping what a huge issue this is yet,” Gillespie said. “And I think by the time we do, there’s going to be a huge need that we’re not going to be able to keep up with locally.”

Mary Landers is the environment and health reporter at the Savannah Morning News. Contact her at 912-655-8295. Twitter: @MaryLandersSMN 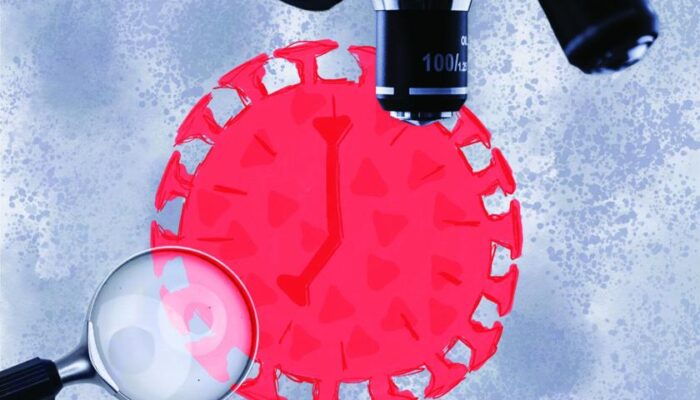 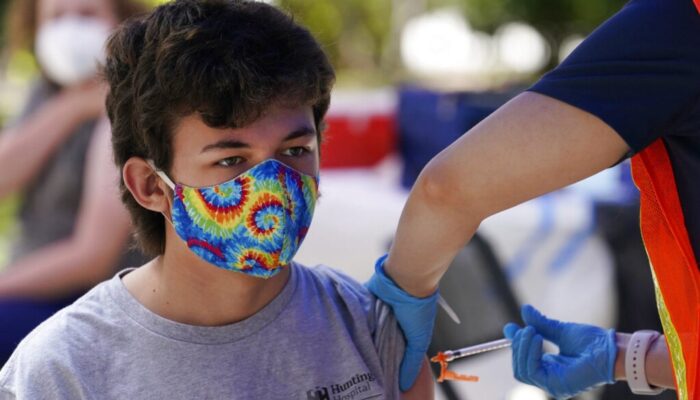 About the Author: Savannah Morning News