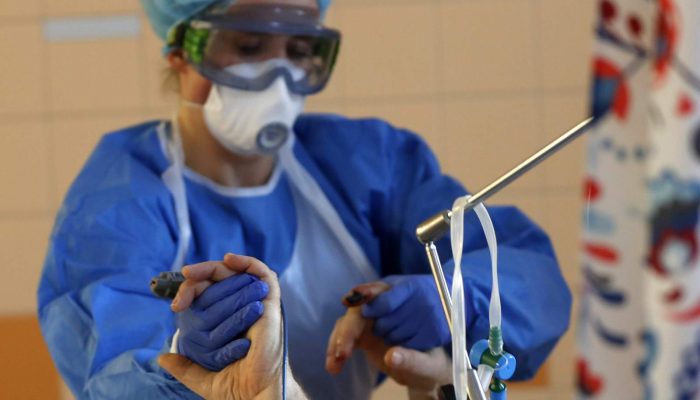 HOUSTON – The coronavirus pandemic forced people to pause everyday life. People were ordered to stay at home and keep away from extended family, friends and work. A shift that is expected to have life-altering results.

Originating in a Chinses seafood and poultry market in late 2019, coronavirus spread to at least 117 countries, killed more than 205,000 people and infected more than three million.

The respiratory illness is spread from person to person, and symptoms include cough, fever, shortness of breath, muscle aches, sore throat, unexplained loss of taste or smell, diarrhea, and headache.

Locally, health officials confirmed more than 10,000 positive COVID-19 cases in the Houston area as of Thursday. More than 230 people have died from coronavirus-related complications. However, a growing number of people have recovered. At last count, more than 3,300 people no longer showed symptoms in the Greater Houston area.

Here is a timeline of major coronavirus-related headlines in the Greater Houston area:

The patient was a man in his 70s, who had traveled abroad and began displaying symptoms of coronavirus after returning to Texas. He was hospitalized at the time in stable condition. The man was the first person in Texas to test positive for COVID-19, outside of the cruise ship passengers in San Antonio.

March 11 Houston Mayor cancels Houston Rodeo, declares a health emergency The remainder of the Houston Livestock Show and Rodeo was canceled Wednesday as officials in both Houston and Harris County declare a health emergency. (KPRC)

The city of Houston and Harris County declared a public health emergency when it became evident that there was community spread of COVID-19 on March 11. In a historic movie, officials canceled the remainder of the Houston Livestock Show and Rodeo.

The declaration from the President freed up money to respond to the crisis and set the Federal Emergency Management Agency in motion.

The order also put FEMA, which is supporting the Health and Human Services Department and the Centers for Disease Control and Prevention for coronavirus response, in a position to be the coordinator.

Texas Gov. Greg Abbott issued a public health disaster declaration, a move the state has not done in nearly 120 years. Abbott said the order aimed to stop the spread of COVID-19. Abbott prohibited gatherings of larger than 10, closed bars and gyms, forced restaurants to switch to takeout and delivery, closed all public and private schools, colleges, and universities. He also stopped visitors at nursing homes, which often serve as epicenters for COVID-19.

Harris County and Houston officials issue a stay-home-work-safe order on March 24. At the time, more than 190 cases of COVID-19 were confirmed in the area. The order meant everyone was forced to remain at home unless conducting essential business such as grocery shopping and going to work. Public and private gatherings prohibited.

March 27 President Trump signs historic $2 billion stimulus aid package to respond to coronavirus pandemicMore than half of eligible Americans have received their stimulus payments since they started going out earlier this month, but tens of millions of people are still waiting for their cash. (U.S. Secret Service)

President Donald Trump signed into law on March 27 a historic $2 trillion stimulus package as the American public and the US economy fight the devastating spread of COVID-19.

The far-reaching legislation is the largest emergency aid package in US history. It represents a massive financial injection into a struggling economy with provisions aimed at helping American workers, small businesses and industries grappling with the economic disruption.

Included in the bill are direct payments to many Americans. Individuals are eligible for up to $1,200 and couples would receive up to $2,400 — plus $500 per child.

April 3Houston accounts for nearly 40% of all cases in Texas

At 2,029, Houston-area coronavirus cases account for 38% of all cases in Texas on April 3.

There were more COVID-19 cases in Houston and Harris County than any other place in Texas, according to a map from the Texas Department of Health and Human Services. At the time, 145 of the 254 Texas counties reported cases of coronavirus, and Harris County outpaced all counties in the state in cases.

April 16A record 1 million people in Texas filed for unemployment

More than 1 million Texans have applied for unemployment insurance since mid-March, countless more people struggled to file claims as they waited to feel the impact after the Texas Workforce Commission expanded its staff, added call centers, and increased its number of servers.

“I know they said they were adding people to the call center and adding server space,” said Daniel Vasquez, a Tyler bartender who lost his job when Abbott ordered restaurants and bars to close to in-person dining. “That’s great to hear, but that was two weeks ago. I still can’t get through the website or the phone.”

April 23Hundreds protest Harris County face mask order AUSTIN, TX – APRIL 18: A protester holds up a sign protesting wearing a mask at the Texas State Capital building on April 18, 2020 in Austin, Texas. The protest was organized by Infowars host Owen Shroyer who is joining other protesters across the country in taking to the streets to call for the country to be opened up despite the risk of the COVID-19. (Photo by Sergio Flores/Getty Images) (2020 Getty Images)

The protest, similar to others taking place across the country, highlighted the growing tension between personal liberty and public health in a time of national crisis.

Texas Gov. Greg Abbott announced that he will allow his statewide “stay home” order to expire on April 30, and Phase 1 of reopening the Texas economy will begin on May 1.

Abbott said coronavirus cases have been on the decline for the past 17 days in the state and the hospital capacity has remained steady. He also said Texas ranks third in the country for most coronavirus recoveries and the number of recoveries will soon exceed the number of positive cases.

As a result of these statistics, Abbott said that health officials gave him the go-ahead to begin a phased-in reopening of the state.

Nearly two months after the first case was confirmed, the total number of COVID-19 cases in the Houston-area crosses 10,000.

On Monday, Abbott noted a decline in new COVID-19 cases over more than a 2-week span in the state, and the hospital capacity has remained steady. He also said Texas ranks third in the country for most coronavirus recoveries.

Many Houston-area officials suggest taking a slower approach to reopening. The local healthcare system is not overwhelmed by COVID-19 patients, largely due to residents participating in social distancing and following stay-at-home orders, experts said.

“This virus is still prevalent in our community and the numbers are low because we’ve been very careful,” Turner said.

Friday was the first day of Texas governor’s phase 1 of reopening the state. Local businesses and restaurants listed in phase 1 welcomed their customers back with open doors after being shut for weeks due to the coronavirus pandemic.

Restaurants: KPRC 2 visited more than a dozen restaurants in the Greater Houston area, Friday, and found patron traffic at most of them was well below even the state-mandated 25% capacity.

Malls: Shopping malls across the state were allowed to re-open. The Houston Galleria was one of them, said general manager Kurt Webb. According to Webb, shoppers will notice several changes throughout the mall, an effort to safeguard customers and employees.

Beaches: Galveston beach was busy but not packed on Friday afternoon after the ‘stay at home’ order was lifted and beaches re-opened. Local officials are stressing social distancing at the beach and people at the Seawall told KPRC they were being mindful to keep a safe distance from other beachgoers.

About the Author: Tierra Smith