Home Texas Community Talk Travis County expects to be in the ‘water delivery business’ for next 7 days, 1M gallons on its way 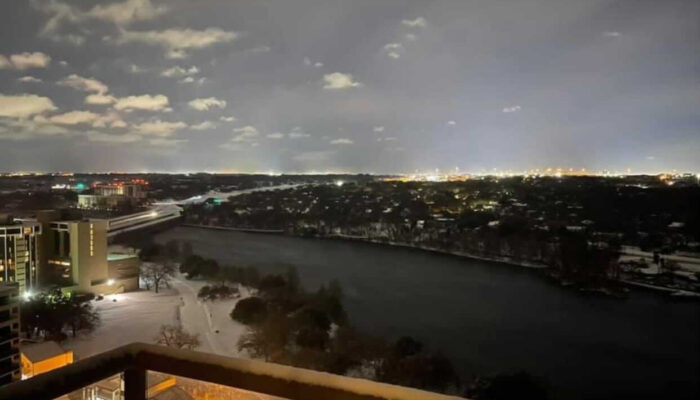 AUSTIN (KXAN) — During a meeting of the Travis County commissioners, emergency services officials said they expected to be “in the water delivery business for the next seven days,” as they respond to a water crisis stemming from a brutal series of winter storms and power outages.

Officials will work to get water to those most in need, Emergency Services County Executive Charles Brotherton said. The Texas Division of Emergency Management landed in Austin Friday evening with 28,000 bottles of water. The supply will be part of a widespread distribution effort by Austin and Travis County.

The joint City-County Emergency Operations Center announced the effort in three phases, with water being handed out to the general public on Sunday.

The city says people in Phase II include vulnerable populations such as seniors, home-bound residents, and those with medical or other special needs. To help speed up distribution efforts, the city and county are working with Capital Metro

Phase 3 is anticipated to begin distribution to the general public Sunday morning; the city says specific details on finalized locations will be released Saturday. The goal is to have a site within each City Council District and key locations in Travis County.

Austin City Manager Spencer Cronk said during a separate press conference Friday that trucks are coming from the surrounding states with 1 million gallons of water, expected to be delivered Friday night and Saturday. Thirty-six pallets from FEMA are coming from Fort Worth and the city will work on a regularly scheduled delivery.

As far as distribution centers go, Austin is working to identify sites that will minimize travel for people. They will operate from sunup to sundown, Cronk said, and people will likely be able to receive one case per household. The city is also working with churches and non-profits on delivery to seniors and the homeless. Cronk said if people are able to buy their own water, they should, but noted grocery stores will likely set buying limits.

Most of Travis County remains without water after a domino effect of events stemming from the multiple winter storms that hit our area. First the power went out for days, including at one of the city’s water treatment plants. That coupled with bursting pipes — both private pipes in people’s homes and public water main breaks — put an incredible demand on our water system.

Austin Water and the City of Austin then called for a citywide boil water notice late Wednesday.

Austin Water: Be prepared to be without water for days, not hours

Judge Brown has been focused on getting more water to our area. He tweeted about that Friday morning, saying water should arrive Friday with more in the next few days. A lot of it is coming from other states.

County commissioners voted unanimously to extend the county’s disaster declaration it put in place Sunday. It will remain in place until further notice.

Austin said its disaster declaration is extended to Feb. 26.

At least 21 Travis County buildings have been damaged in the storm, whether from sprinkler system, HVAC or leaking water lines issues. They won’t know until the pipes unfreeze how widespread pipe and water damage will be.

Wes Priddy with the Travis County Sheriff’s Office said the training academy was damaged with sprinkler system leaks. He said there is low water pressure at the county jail, but it has pumps it can use to help bump that up and it’s a priority so never lost power. Some sprinklers also froze at the jail, and there were roof leaks and burst pipes. It also encountered some staffing issues, because people couldn’t make it to facilities, so people were working up to 20 hours straight before they could be relieved. Staff also worked to get inmates bottled water and has the ability to boil water as well.

Craig Smith with the Travis County Sheriff’s Office said it prioritized keeping law enforcement buildings in the community open so people could reach it if needed. Two deputies have also been at four of the warming shelters from 8 p.m. to 8 a.m.

Some Austin warming centers face utility outages of their own

Smith said as far as calls for service goes, they have responded to double the amount of collisions, 210, from the same time frame last year. At some points, it has told people in minor collisions to head home and reach back out after this week to get help with paperwork. All specialized units, including the lake patrol, SWAT and traffic have been transferred to responding to clals for service.

TCSO said there’s been a lot of overtime this week that will affect its budget.