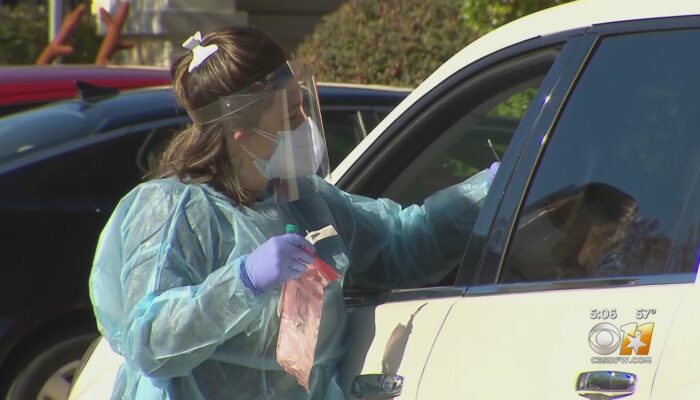 
DALLAS (CBSDFW.COM) – The Trump administration’s Coronavirus Task Force says increased and focused testing can interrupt the surge of coronavirus cases by detecting people before they experience symptoms and those who are asymptomatic.

Recommendations sent to the state of Texas on November 22 by the Task Force, obtained and revealed by the Center for Public Integrity, say there should be proactive weekly testing for teachers, community college students, county workers and all hospital personnel.

The state isn’t planning to impose additional testing requirements at this time, but that doesn’t keep other entities from enacting the recommendations on their own.

Dallas County Judge Clay Jenkins says he agrees testing needs to be increased, but that he’s not the only one who can make that decision. “The leadership of the department varies, because you get a lot of elected officials, but I make it a point of emphasis with my team.”

Judge Jenkins says this week, he encouraged school superintendents in the county to take advantage of the state’s free testing program for school districts.

A spokesman for the Texas Division of Emergency Management said Friday, Dec. 4, that 581 school systems are taking part in the program and that the agency has distributed nearly 1.1 million test kits to schools.

The Trump administration also recommends the state officials “ensure all universities returning in the winter move to mandatory weekly testing of all on and off campus students.”

SMU says with exception of student athletes, it won’t perform testing of all returning students faculty and staff but that testing is available for them.

UT Arlington says testing is offered to all students by appointment and that students and faculty are asked to check their temperatures daily before going to class.

UNT says aggressive testing using campus and community resources will continue but that it’s unlikely they’ll test every student each week because many don’t go to classes on campus.

TCU says it will encourage students to get tested before returning to campus for the spring semester, and that the university tests symptomatic community members and those exposed to a Covid-positive person.

Dallas College says it doesn’t anticipate the need for mandatory testing and that classes will be mostly online spring semester.

Collin College says it doesn’t provide testing for students and has no plans to require it spring semester.

Judge Jenkins says, “Our schools are doing a pretty good job, both at the under college, and then the college level.

We are seeing some spread there, but normally what we’re finding is that spread is not occurring in the classroom where we’re six feet apart and masked.”

The DFW Hospital Council says testing protocols are up to each hospital system.

Charlsea Prichard, Director of Nursing Critical Care at Texas Health Fort Worth said while they don’t test employees every work, they prescreen them daily before they enter the building. “It’s worked out really well. I think that they said they found a few health care workers who may have been asymptomatic, and they stopped them before they’re able to care for the patient.”

A spokeswoman with Parkland Hospital says the hospital doesn’t regularly test employees for Covid-19 unless they develop symptoms.

She says the hospital doesn’t have enough tests to do that and that employees are required to use appropriate PPE to prevent the spread of the virus.