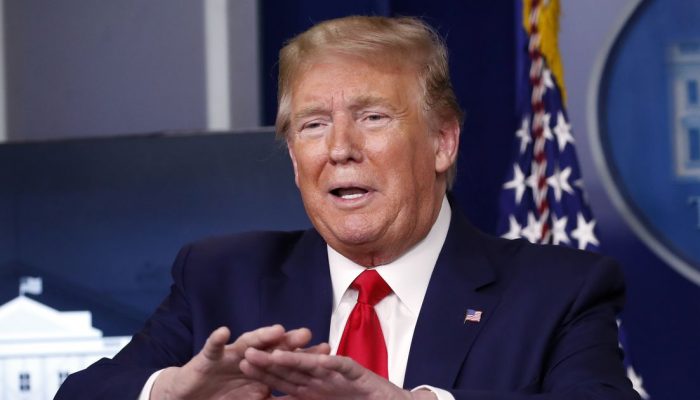 WASHINGTON—The White House defended President Donald Trump’s abrupt announcement of a freeze on immigration on Tuesday, as allegations mounted that he is using the COVID-19 outbreak as a pretext — to distract attention from his mishandling of the crisis and to advance an agenda he held long before the pandemic.

Trump announced via tweet Monday night that he plans to issue an executive order freezing immigration “in light of the attack from the Invisible Enemy as well as the need to protect the jobs of our GREAT American Citizens.”

The argument that immigration represents a threat to public health or to the U.S. economy at this stage in the crisis is questionable. The United States now accounts for about a third of COVID-19 infections worldwide, meaning that if anything, other countries have more to fear from American travelers.

And for the last week, Trump has been pressuring governors to reopen businesses and lift stay-at-home restrictions to start reviving the economy. His argument that the economy is too delicate to absorb immigrants seems to contradict his assertions that the worst has passed in all but a handful of hot spots such as New York City.

“This action is not only an attempt to divert attention away from Trump’s failure to stop the spread of the coronavirus and save lives,” tweeted Rep. Joaquin Castro, D-San Antonio, chairman of the Congressional Hispanic Caucus, “but an authoritarian-like move to take advantage of a crisis and advance his anti-immigrant agenda.”

This action is not only an attempt to divert attention away from Trump’s failure to stop the spread of the coronavirus and save lives, but an authoritarian-like move to take advantage of a crisis and advance his anti-immigrant agenda. We must come together to reject his division. https://t.co/wYEai4rYVY

As of last Thursday’s weekly jobless report, 22 million Americans filed for unemployment benefits in a single month — a staggering blow to families and the U.S. economy. The administration has not pointed to immigration, legal or otherwise, as a cause.

Rather, the collapse stems from the need to close businesses and keep most people in their homes to slow the spread of the highly contagious new coronavirus, which has proven more deadly than flu and has overtaken all other causes of death besides heart disease in most of the country.

“When you’re a xenophobe, bans on migration are the only tired, failed, hateful solution you can think of,” said Charanya Krishnaswami, Advocacy Director for the Americas at Amnesty International USA. “Suspending immigration won’t make the US – which currently leads among COVID cases worldwide – safe.”

The White House deflected charges of scapegoating and cast the new restrictions as a way to protect U.S. workers from competition as the economy reopens.

“As President Trump has said, ‘Decades of record immigration have produced lower wages and higher unemployment for our citizens, especially for African-American and Latino workers,’ ” White House press secretary Kayleigh McEnany said Tuesday. “At a time when Americans are looking to get back to work, action is necessary.”

Officials in the Trump administration concede that the new order won’t represent a significant change to current policy.

Trump has already halted almost all immigration. Border controls are as tight as they’ve been in decades. Migrants, refugees and asylum seekers are turned away, and anyone caught trying to enter the United States is being expelled immediately.

The State Department is not taking new visa applications, or processing existing applications.

According to multiple news reports, the new executive order likely will include exceptions for healthcare workers and migrant farmworkers – a critical source of labor for American agriculture. It will not address removal of immigrants already in the U.S. or the visa renewal process.

Countries around the world have largely closed their borders to nonessential travel in a bid to slow the spread, but these are generally cast as temporary travel restrictions rather than as changes to immigration policy.

On March 18, the U.S. and Canada agreed to close their border to nonessential travel.

Two days later, Trump announced a similar closure along the U.S.-Mexico border, offering assurance that trade would continue to flow and citing concerns – unsupported by any evidence – that disease-bearing migrants could overwhelm the U.S. health care system.

“Our nation’s top health care officials are extremely concerned about the great public health consequences of mass uncontrolled cross-border movement … even beyond but mostly during this global pandemic,” Trump said March 20, hours before the border closure took effect.

In fact, Mexico’s infection rate was far lower than that of the United States at the time, and still is. And no evidence has linked the Southern border to the outbreak.

The United States accounts for nearly a third of the 2.5 million confirmed COVID-19 cases around the globe. Mexico has reported 712 deaths, compared to more than 42,000 for the United States, according to the most recent tracking data from Johns Hopkins University.

Immigrant advocates accused Trump of using the crisis as yet another pretext to promote racist stereotypes about disease-bearing foreigners, and to advance a restrictionist agenda that Congress had repeatedly stymied.

This is not about the policy. It is about the message the president wants to send. He wants people to turn against “the other.” And, regardless of the valuable contributions immigrants are making to the response and recovery, he sees immigrants as the easiest to blame.

“Trump has finally handed over full presidential power to the far-right and immigration extremists,” said Yesenia Mata, executive director of La Colmena Immigrant Rights Center, an advocacy group in New York City, calling this an attempt by Trump’s immigration adviser Stephen Miller and other “xenophobes who are exploiting this crisis to completely close our country to the world.”

Public HealthUpdated with second positive test: Is the U.S. deporting immigrants with coronavirus?A 29-year-old Guatemalan deportee has tested positive for coronavirus, leading to concerns that the U.S. may be deporting immigrants who have COVID-19. The Guatemalan is believed to be the first case of the deportation of an infected immigrant. A spokeswoman for Immigration and Customs Enforcement said the Guatemalan, whose identity hasn’t been disclosed, had no symptoms when he boarded his deportation flight near Phoenix.