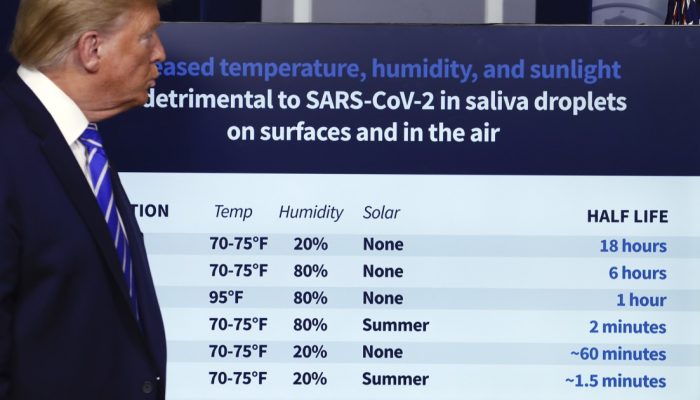 President Trump asked during his Thursday coronavirus briefing whether UV light or injections of disinfectant might be used to cure COVID-19 patients, blindsiding his medical advisers and unleashing a torrent of ridicule on social media.

He suggested the unorthodox treatments after being shown research suggesting the virus was susceptible to sunlight, heat, and humidity.

Once again, it meant scientists on his coronavirus task force had to sidestep his words delicately as he flouted crisis communications convention — and the idea that leaders should stick to facts and avoid false hope — to brainstorm publicly.

A day earlier, he contradicted his scientific advisers by saying the virus might not return in the fall even as they said it was vital to prepare for a second wave of infections.

Thursday’s briefing featured Bill Bryan, head of the science and technology directorate at the Department of Homeland Security, who presented research suggesting that sunlight, high temperatures, and humidity have a “powerful effect” on the survival of the novel coronavirus. He also displayed a slide saying that bleach and isopropyl alcohol “work to kill the virus” on surfaces.

The findings will enhance hopes that COVID-19 will display the same behavior as other respiratory illnesses, such as influenza, that die out in the summer months.

And it provided a chance for the president to say he was vindicated in comments he made in February when he was scorned for saying the virus would disappear in April as temperatures warmed.

Then he mused on using ultraviolet or “just very powerful light” to treat patients.

“Supposing we hit the body with a tremendous … whether it’s ultraviolet or just very powerful light. And I think you said that hasn’t been checked, but you are going to test it,” he said to Bryan, who was sitting off to the side of the podium.

“And then I said supposing you brought the light inside the body, which you can do either through the skin or in some other way. And I think you said you are going to test it.”

Bryan responded: “We’ll get the right folks who could.”

The president reflected on the possibility of using disinfectant. “And is there a way we can do something like that by injection inside or almost a cleaning,” he asked.

Bryan did not respond until another later reporter asked him directly if it would be possible.

“We don’t do that within that lab,” was his diplomatic reply.

It was typical of the dance done on an almost daily basis, as doctors try to stick close to the research while not embarrassing the president by contradicting him on live television.

“The doctors on the task force and the scientists more generally responding to the pandemic are constantly looking over their shoulders,” Lawrence Gostin, a public health expert at Georgetown University, told the Associated Press earlier in the day. “There is a tug of war between the politicians and the public health officials.”

Scientists outside the briefing room felt no such constraints.

Irwin Redlener, director of the National Center for Disaster Preparedness at Columbia University, told MSNBC: “The fact the president asked about injecting disinfectants or isopropyl alcohol into the human body was kind of jaw-dropping.”

The dynamic inside the briefing room was on display again later as Trump was asked whether he was being irresponsible in encouraging people to think that sunlight could protect them when much of the country remains under stay-at-home orders.

Trump said he was simply responding to the research and wanted to know if applying light and heat might offer a cure.

“Maybe you can, maybe you can’t. I’m not a doctor,” he said before bringing his task force coordinator Dr. Deborah Birx into the conversation.

“Deborah, have you ever heard of the heat and the light relative to this virus?”

“Not as a treatment,” she said, before pivoting quickly to an explanation of how heat, in the form of fever, was one of the body’s mechanisms for battling infection.