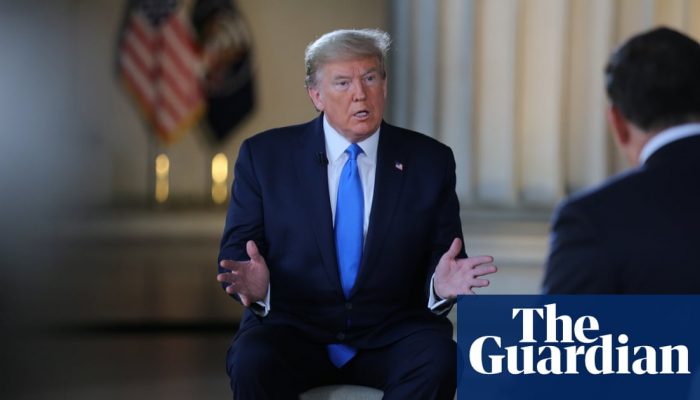 
Donald Trump has said he is “very confident” there will be a vaccine for coronavirus by the end of the year, revising up his estimate of the final US death toll as several European countries prepare for a cautious easing of lockdowns.

The president used a Fox News “virtual town hall” on Sunday night to repeat his regular virus talking points, including that a vaccine was not far away, Covid-19 was China’s fault and the economy would not only recover but “grow like crazy”.

“We are very confident we are going to have a vaccine by the end of the year,” Trump said. Scientists have repeatedly warned that a vaccine may take 12-18 months or longer.

Trump indicated that intelligence agencies would release further information on Monday about the virus but failed to give details. Asked why he didn’t act earlier on the epidemic, the president said that on 23 January he was in told in briefings there “could be a virus coming, but it was of no real import”.

His comments came amid reports that US officials believed China intentionally covered up the extent and severity of the virus while increasing its imports and decreasing exports of medical supplies.

The Associated Press said a four-page Department of Homeland Security intelligence report dated 1 May found China held off informing the World Health Organization (WHO) that the coronavirus was a contagion for much of January so it could order medical supplies from abroad, and that its imports of face masks and surgical gowns and gloves increased sharply.

Those conclusions were based on the 95% probability that China’s changes in import and export behaviour were not within normal range, the report said.

Trump’s Fox News appearance was shot in the Lincoln Memorial, a Washington landmark. During the interview he said the press had treated Lincoln badly, but him worse. Photograph: Getty Images

Asked about the the virus’s origins, Trump again suggested it came from a Wuhan lab. “I think they made a horrible mistake and they didn’t want to admit it,” he said.

On Sunday the US secretary of state, Mike Pompeo, said there was “enormous evidence” the coronavirus outbreak originated in a laboratory in Wuhan, China, but did not provide evidence for his statement.

The president’s appearance came as several European nations cautiously prepared to ease lockdown restrictions. Italy, which reported its lowest daily toll since stay-at-home orders were imposed on 10 March, is set to follow Spain in allowing people outside. From Monday Italians will be permitted to go to parks and visit relatives. Restaurants can open for takeaways and some shops will be able to resume business, but there has been confusion over the rules.

“On the one hand we’re super excited for the reopening, we’re already organising various activities the kids will be able to do with their grandparents outdoors,” said Rome resident Marghe Lodoli, who has three children. “On the other hand it’s disorientating. The rules are not clear and we’re not sure if just using common sense will do.”

Italian authorities have said some preventative measures are still needed in a country that has the second-highest number of virus deaths.

Germany will continue its easing on Monday while Slovenia, Poland and Hungary will allow public spaces and businesses to partially reopen. In another sign of life returning, an influential German minister said on Sunday that he supported a resumption of the country’s football season this month as long as teams respected hygiene conditions.

Officials in Moscow, however, urged residents to stay home. With cases increasing by several thousand each day, Russia is now the European country registering the most new infections, with Moscow at the centre of the contagion.

The British government said the easing of coronavirus lockdown measures was likely to be gradual. The UK death toll had reached 28,446 according to the Johns Hopkins tracker, putting the UK just behind Italy on 28,884 and the US with 67,680 deaths.

Global coronavirus cases have surpassed 3.5 million with more than 247,000 deaths.

In New York, the centre of the US outbreak, an emergency field hospital erected in Central Park is set to close. Dozens of New Yorkers were fined for violating social distancing guidelines as they flocked to beaches and parks in balmy weekend weather.

Japan’s state of emergency is expected to be extended until the end of the month.

France will not quarantine anyone arriving from the EU, the Schengen area or Britain due to the coronavirus.

New Zealand has reported no new coronavirus cases for the first time.

South Korea plans to ease a ban on some gatherings and events as long as they “follow disinfection measures”.

Brazil has become the first country in Latin America to report more than 100,000 cases.

The Iranian president, Hassan Rouhani, announced mosques will reopen across large parts of the Islamic republic after they were closed in early March.

About the Author: Alison Rourke