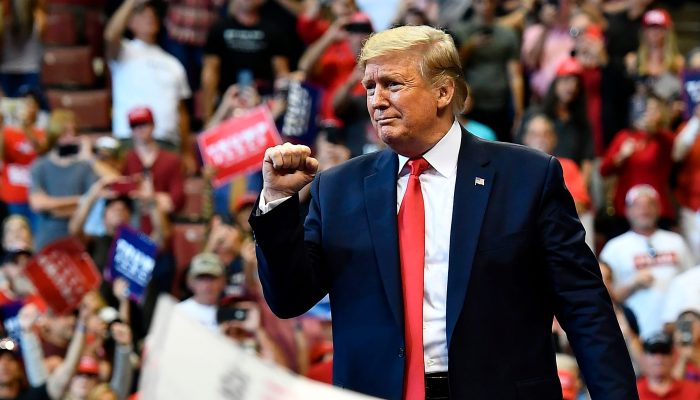 President Donald Trump pumps his fist during a “Keep America Great” campaign rally at the BB&T Center in Sunrise, Florida on November 26, 2019.

President Donald Trump’s first in-person fundraising event in the wake of his campaign going fully virtual due to the coronavirus pandemic is on track to raise at least $10 million.

The massive total, described to CNBC by those familiar with the event, is set to be raised at a gathering on Thursday in a private home in Dallas where Trump, according to Politico, is expected to attend.  The funds are set to go toward the Trump Victory committee, a joint fundraising operation shared by the campaign and the Republican National Committee.

Tickets to the event go up to $580,600, one of the people added, the same amount that was charged for a February event at the home of billionaire investor Nelson Peltz. That reportedly ended up raising $10 million as well for the same committee.

An RNC official noted “the $10 [million figure] is not final” for the Dallas event and explained that the group will not release the official totals until later this week.

A spokesman for Trump did not return a request for comment.

The Trump campaign is expected to resume hosting rallies in the next two weeks. The president’s return to the campaign trail comes as he’s down in national polls to the presumptive Democratic nominee, Joe Biden. A Real Clear Politics polling average has Trump behind Biden by eight points. Trump and the RNC suspended their in-person events in March.

The expected haul in Dallas is the latest sign that wealthy Republican donors are still willing to stand behind Trump. It comes amidst the criticism he faced as the coronavirus spread and killed more than 100,000 people in the United States and for his response to the nationwide unrest following the death of George Floyd at the hands of a Minneapolis police officer.

It also is another sign that Biden is still far behind in catching up to Trump’s fundraising prowess. The president has had a four-year head start in organizing a campaign and building a financial war chest.

Biden’s upcoming fundraiser with Sen. Kamala Harris that’s scheduled for Tuesday, for instance, is on pace to raise well over $2.5 million.

Trump’s absence from the campaign trail has allowed Biden to close the gap somewhat in the fundraising game. Biden and the Democratic National Committee finished the month of April raising just over $60 million, while Trump and the RNC brought in close to $61 million with $255 million on hand going into May. Neither the Trump nor Biden campaign has announced how much they raised last month.

Biden’s campaign also has gone virtual since March when states started shutting down in the wake of the pandemic. He has recently ventured outside his home, including on Monday, when he traveled to Houston to meet with the Floyd’s parents. Floyd, a black man, was unarmed when a since-fired police officer knelt on Floyd’s neck for nearly nine minutes. The officer, Derek Chauvin, was charged with murder and manslaughter. The three officers accompanying him were also fired and charged with aiding and abetting murder.

Biden’s fundraisers have seen a surge of contributions and commitments since the Floyd protests started in late May.

About the Author: Brian Schwartz