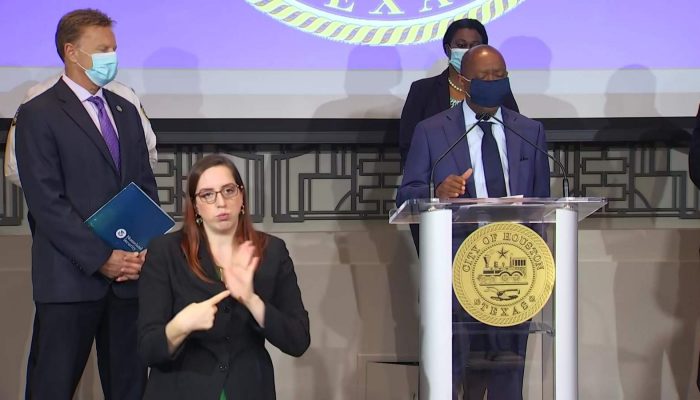 HOUSTON – Houston Mayor Sylvester Turner announced the launch of a food assistance program for people with disabilities during his daily coronavirus briefing Tuesday.

Turner addressed the food insecurities for the vulnerable and unable to get to a food distribution facility.

The city of Houston partnered with Walmart, Sam’s Club, the Houston Food Bank and Houston METRO for the program. Officials said Walmart and Sam’s Club contributed $30,000 towards food distributions.

Officials with the Houston Food Bank said the non-profit organization is aggregating 150% of its distribution and said they are thankful for the support from local partners.

The program aims to deliver shelf-stabilizing items, fresh produce, as well as some basic home necessities for people with disabilities who are finding it difficult to secure these items as a result of the COVID-19 public health emergency.

Turner said those who need assistance can fill out online forms or call 832-394-0814 to be placed on the list to receive non-perishable items and food. He said all distributions will be available Friday.

As of Tuesday, Turner said there were 20 new cases, which he says has been lowest report during the week since the city’s first reporting. Turner also reported no deaths, which he says is the first time since reporting deaths, which usually averaged one to three people daily. He said it seems like the increase of COVID-19 testing, social distancing and stay at home orders are working to help curb the number of cases.

Officials said face coverings are still important because people are not able to infect others as easy before.

Turner said the numbers at the hospitals show more people are being discharged than admitted. He also mentioned how face coverings are still important this month.

“Face covering is important. I think they’re a large amount of people who are asymptomatic and can still infect someone else,” Turner said.

Acevedo gave an update on the officer who was hospitalized from serious complications from the coronavirus. He said the officer is recovering but still on a ventilator. Acevedo said the officer’s wife told him that she is thankful for all the prayers.

Acevedo said misdemeanor crimes are down. He said burglary of buildings are still up 28% and domestic violence calls are still high. He ensured that if residents are in need of help, to call the department for assistance.

Turner said he has no problem with curbside services of retail businesses but doesn’t know how malls will operate in that order. He said he is interested in hearing the governor’s take on state testing, which will help determine where the virus is located to see if the city has even reached its peak.

Turner said he is concerned that local and state government officials are not on the same page when it comes to the status of how the state will go about reopening places and will conflict trust from residents.

KPRC 2 will livestream the press conference at 3 p.m.