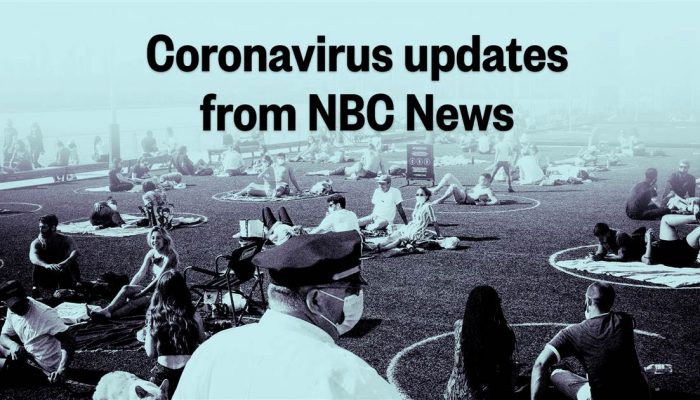 Two children in Washington State were diagnosed with a rare and potentially deadly COVID-19-linked condition.

The illness is known as Multisystem Inflammatory Syndrome in Children, or MIS-C.

The children, one under the age of 10, are being treated at Seattle Children’s Hospital, state officials announced Friday.

Those diagnosed with MIS-C are under 21 with a fever, laboratory evidence of inflammation, and severe illness, with no other plausible diagnoses, who’ve tested positive for COVID-19 or exposure to a confirmed case. Hundreds of children and young adults have been diagnosed with MIS-C in the United States.

Gay beach destinations plan for summer, with pandemic in mindA jogger along an empty Commercial Street in Provincetown, Mass., on May 13, 2020.John Tlumacki / Boston Globe via Getty Images

From New York’s Fire Island to Massachusetts’ Provincetown, the Northeast’s LGBTQ beach destinations are planning for a new normal this summer.

Another large study finds no benefit to hydroxychloroquine for COVID-19

Hydroxychloroquine does not help COVID-19 patients, and indeed may increase deaths, according to a large, international study published Friday in The Lancet.

The research is the latest to show the drug — which President Donald Trump this week said he was taking as a preventive strategy — can lead to potentially deadly heart problems.

Memorial Day weekend is typically one of the busiest times of the year for car dealerships — and this year’s deals are expected to be some of the best ever.

Automakers have been offering incentives averaging about $5,000 on the typical new vehicle, with the givebacks on full-size pickups running well above $7,000, whether in the form of rebates, zero-interest loans or other deals.

With consumers locked down at home and auto plants shuttered, sales of new cars plunged last month to barely half what they were last April. But with most states easing up on lockdowns, “Dealers in most of the country will be open again,” whether online or in their showrooms, “and we expect to see the (big sales) carried forward,” said Nick Woolard, director of analytics with online auto site TrueCar.com.

“We’re seeing far more generous incentives and deals out there than we typically would for Memorial Day weekend, and since more consumers might be looking at vehicles for summer road trips instead of airline travel, things might look up a bit for the industry,” said Jessica Caldwell, Edmunds’ executive director of insights.

The governor said at a news briefing on Friday that the state had 109 deaths from the coronavirus, down from 105 on May 20.

Cuomo said that if the number of deaths in the Long Island and mid-Hudson regions of the state continue to decline and if those areas get their contact tracing for the virus online, they could reopen next week.

The Week in Pictures: Tentative reopenings and a world behind masks

See more photos as all 50 states begin to reopen.

The U.S. Department of Health and Human Services will begin distributing $4.9 billion in CARES Act funding to nursing homes in an effort to help the hard-hit facilities curb the spread of the coronavirus, officials said Friday.

Nursing home providers and industry associations have been asking for $100 billion, but several groups said Friday they were still grateful for the government funding.

“We are working around the clock to protect the people who are most vulnerable to COVID-19,” Mark Parkinson, CEO of American Health Care Association, the industry group for for-profit nursing homes. “That work makes this funding more important than ever.”

Anti-violence groups, not police, will enforce social distancing in NYC

Eighteen organizations with the Cure Violence movement, which is also called the crisis management system, will be dispersed across 21 neighborhoods to “use the trust that they have built in communities … to educate people about the coronavirus,” de Blasio said. The effort will be “of and by and for each community,” he added.

The mayor said last week that the New York City Police Department would no longer enforce mask-wearing by the public unless there is “serious danger.”

He made that announcement amid outrage over a video showing officers handcuffing and pinning down a 22-year old mother who was not wearing a mask properly. The department had also drawn scrutiny over its enforcement of social distancing guidelines after police data showed the vast majority of those receiving summonses were people of color.

The NYPD will now focus on breaking up gatherings, particularly over Memorial Day weekend, and concentrate on neighborhoods that have seen congregations at restaurants.

The Department of Public Health in Georgia logged a total of 41,427 confirmed cases and 1,783 deaths as of Friday morning.

Secretary of Defense Mark Esper said on TODAY Friday that a coronavirus vaccine to treat Americans is “absolutely” possible by the end of the year.

Esper expanded on his comments from a White House press conference in which he said the Department of Defense “will deliver” a vaccine by the end of the year for an illness that has so far infected more than 1.5 million Americans and caused 94,729 deaths in the U.S., according to Johns Hopkins University.

“Absolutely it’s possible, and I’ve spoken to our medical experts about this,” Esper told Savannah Guthrie. “We are completely confident that we can get this done.

Read the full story at TODAY.com.