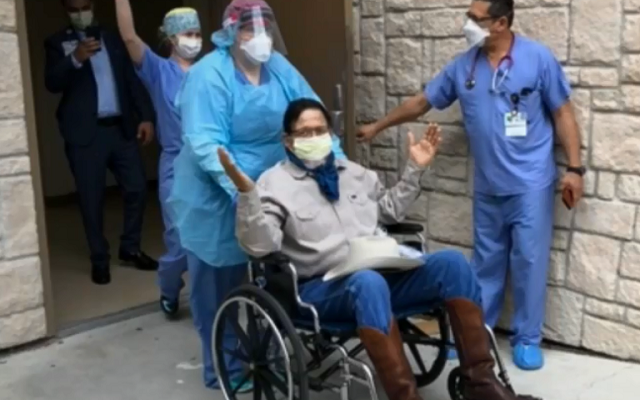 SAN ANTONIO (KTSA News) – Two COVID-19 patients who were critically ill and placed on ventilators are out of the hospital after receiving convalescent plasma therapy.

The first in San Antonio to receive the experimental treatment was Jimmie Hayden, who was released from Methodist Hospital-Stone Oak Wednesday.

In a Facebook post, his wife thanked God , the doctors and nurses, and those who have sent prayers, love and support during Hayden’s three-week stay in the hospital.  She also expressed her gratitude to the plasma donor.

“I want to thank David  Hermann, who I hope will become our friend since he’s already part of the family,” said Ashley Hayden. “I truly believe without your donation of plasma, we would not be celebrating this day.”

At a Wednesday evening COVID-19 briefing, Mayor Ron Nirenberg showed a photo sent to him by the sister of Joseph Doria, who was the second COVID-19 patient in San Antonio to receive convalescent plasma therapy.   Doria also was released from Methodist Hospital on Wednesday.

“Here’s a little good news that we can celebrate, but also showing the innovation and the work that our researchers in this coronavirus pandemic have done to improve the lives of everyone, so welcome home Joseph,” said Nirenberg.

Nirenberg announced Wednesday that 350 local COVID-19 patients have fully recovered, and he’s asking that they donate plasma, if they can,  to help those who are seriously ill.

Land developer Paul Basaldua is one of those donors.  He was diagnosed with COVID-19 in mid-March.  He believes he caught the virus from his 3-year-old son after he got home from a trip.

“Of course, I missed my sons while I was gone, so when I got home I kept hugging them,” he said.

A couple of days later, he woke up with body aches.

“I felt like I had been hit by a bus,” he told KTSA News.

Then he got a fever, so he was tested for COVID-19.   A day later, the results came back positive for the novel coronavirus, so he immediately called his wife, Kelly.  She’s a pediatrician and was seeing patients when he called her, so she had to leave right away and go home to quarantine with her family.

During their quarantine, she looked after both, especially their young son.  Paul says his child got over it in 2 or 3 days, but it took him longer to recover.

They had to celebrate their son’s 8th birthday under quarantine, but Paul says the neighbors helped make it special. They brought cupcakes and left them on the front porch, and around 3 o’clock that afternoon, the neighbors gathered in front of the family’s home, standing about 10 feet apart from each other.

“One of the neighbors plays saxophone, so they played the saxophone and sang Happy Birthday to him.  It was a very cool moment,” said Basaldua.

He considers himself lucky, because he didn’t get the dry cough many COVID-19 patients talk about, and he did not require hospitalized.  Now, he’s giving back.  Basaldua donated four bags of plasma last week,  and four more bags this week.

“It felt rewarding because you feel like you could be making an impact on something that’s affecting so many people,” said Basaldua.

“They tell me that I should have enough antibodies in my blood and my plasma to be able to give for a few months,” Basaldua said.

He’s urging others to give and help save the lives of  others who are fighting the virus.

“Now that more than 300 people have recovered, if half those people give three bags of plasma each, we’ve got a good weapon to fight this ridiculous virus,” he said.

If you’ve recovered from COVID-19, you must be tested before you can donate blood for the convalescent plasma therapy.

If you’ve recovered from COVID-19 and would like to donate plasma, contact the South Texas Blood and Tissue Center.