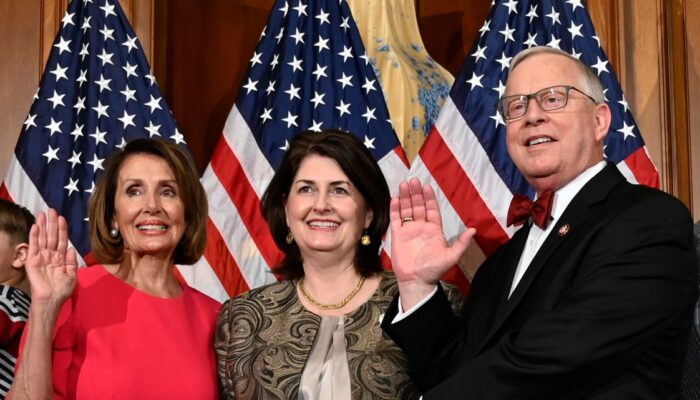 A special election will be held May 1 to fill the seat held by Ron Wright until his death in early February.

TARRANT COUNTY, Texas — The race for Texas’s 6th Congressional District is becoming clearer and the field is becoming more crowded. It includes the southeast corner of Tarrant County as well as Ellis and Navarro counties.

Tuesday, Governor Greg Abbott set Election Day for May 1 to fill the seat Rep. Ron Wright held until he died in early February after being hospitalized with COVID-19.

WFAA is tracking the names that have entered the race so far.

Stephen Daniel, who ran against Wright in 2020, announced Tuesday evening he wouldn’t run for the seat again.

“We won far more votes than any other Democrat in the history of this district,” Daniel wrote. “While it was not enough to win, I’m proud of the movement to turn this district blue.”

Daniel said while he won’t be running, he plans to be actively involved.

Ron Wright’s widow has announced she will run to replace him.

In a website launched Tuesday night, Susan Wright said “she is proud to have stood alongside Ron as he served the constituents of the 6th district and is running to preserve her husband’s commitment to bring conservative values to Washington.

She is also a long-term member of the Texas State Republican Executive Committee, according to her campaign website.

Shawn Lassiter announced Wednesday she was running for the TX-06 seat. Lassiter is originally from Pensacola, Fla. She earned a Bachelor of Science degree at Alabama State University and a Masters of Public Administration at the Forbes School of Business, and she has lived in Texas for more than a decade now.

The oldest daughter of a public school special education teacher, she’s a first-generation college student and a mother of three.

“Voters need to be looking at elected officials who have the political courage to center their best interests, that’s going to choose people over profits,” Lassiter said in an interview with WFAA.

She says her involvement in education throughout her life is what drove her to run for office.

“I’ve been working over a decade here in North Texas to serve children and families inside of the education system making sure that there’s equity in education that kids get good health care,” Lassiter said. “It’s time to elect people who are already doing the work so that when we get there, we can get some work done.”

She’s worked at Leadership ISD for just over two years, an organization dedicated to racial equity in education. Before that, she was a science teacher and then part of the equity and excellence department at Fort Worth ISD and a varsity girl’s basketball coach at Paschal High School.

“My upbringing and who I am makes me qualified. People want real people representing them,” she said. “We’ve got to really address the inequities and a lot of our systems and the three major systems we’re going to be focused on is the education system, the healthcare system and our economy, and so we’ve got to look at the inequities around those three systems and really start to address those.”

Tuesday, Lydia Bean launched her run for Congress tweeting, “North Texas is in crisis. From our crumbling infrastructure to the raging pandemic, we need new leaders in Congress who will tackle these challenges.”

On her website, Bean describes herself as a new mother and small business owner. She graduated from Austin College and has a Ph.D. in sociology from Harvard University.

In 2020, Bean ran for District 93 in the Texas House of Representatives but lost to Republican Matt Krause 54-46.

She previously worked as a professor at Baylor University and founded Faith in Texas, which her website describes as “a nonprofit organization that brings faith communities together to work toward change in their schools, cities, and state.”

“Lydia believes our leaders are failing us. Texans, despite living in the energy capital of the world, have watched crumbling infrastructure cripple our cities when we needed it the most,” her website reads. “The desire to win at all costs has led politicians to undermine our elections – the foundation of our democracy.”

Sanchez lives in Fort Worth and is originally from Ellis County. She has a Bachelor’s degree in political science from Rice University and later founded a public relations company.

“Wages and incomes have failed to keep up with the cost of basic needs — from health care, to housing, to education, to child care — and that’s before a mismanaged pandemic devastated local small businesses,” she said in a statement. “More than ever, our community deserves accountable leadership with the courage and conviction to make our voices heard. Together, we can build a stronger, fairer economy that invests in our people, promotes shared prosperity, and empowers everyone to achieve their God-given potential.”

Several Republican candidates have filed but have not shared information regarding their campaigns, including Michael Egan, Asa Palagi and Montgomery Markland.