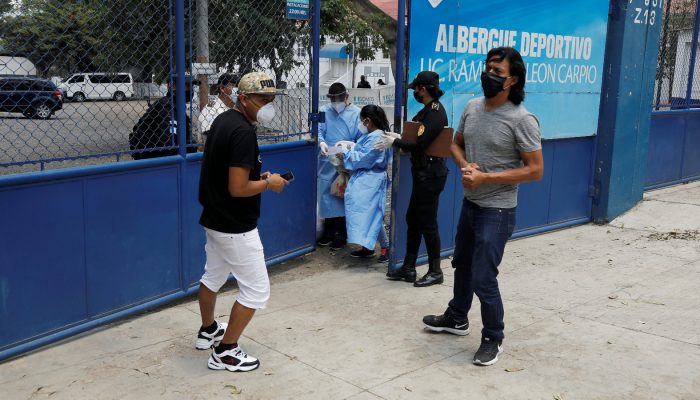 In the scramble to contain the spread of Covid-19 in the United States, the Trump administration has been pushing forward with its aggressive immigration enforcement agenda, deporting thousands of people to their home countries, including some who are sick with the virus.

Dozens of Guatemalans flown home by Immigration and Customs Enforcement since late March tested positive for the coronavirus after returning, according to Guatemalan authorities.

And deportations of children and teenagers who arrived at the border without adult guardians have risen sharply following stepped-up restrictions at the border adopted during the pandemic.

President Trump used the surgeon general’s authority last month to effectively seal the southwestern border, saying the move was necessary to prevent migrants from carrying the coronavirus into the United States. But few, if any, people with the disease have crossed the border from Mexico, and Guatemalan authorities have now accused the United States, which has the most coronavirus cases in the world, of sending infected people back across its borders.

Deportations to Honduras and El Salvador have also continued, despite the concerns of migrants’ advocates and some government officials in Central America. Those countries, like neighboring Guatemala, are beset by widespread poverty and weak public health systems, making them particularly vulnerable to the impacts of the pandemic.

A team of researchers from the Centers for Disease Control and Prevention arrived in Guatemala this past week “to review and validate the Covid-19 tests performed on those arriving,” according to Jenny Burke, an ICE spokeswoman. Ms. Burke said the agency would then “re-evaluate current medical procedures with C.D.C. guidance to ensure that any newly necessary practices are implemented.”

Even with restrictions on flights into the United States to prevent transfer of the coronavirus, a significant number of deportations are still being conducted. In March, ICE completed 17,965 removals, according to agency records. Total deportations have declined so far in April, however, with 2,985 removals of foreign nationals from all countries.

U.S. authorities said this past week that they were suspending removals to Guatemala pending an investigation of that country’s claims about the coronavirus.

The speedy removal of unaccompanied children and teenagers represents a significant change from previous practice, under which migrants designated as “unaccompanied minors” were taken to shelters operated by the federal Office of Refugee Resettlement and usually given a chance to apply for asylum in the United States.

Before the pandemic-related border ban, such young people were only deported after a lengthy legal process in which they were given access to social workers and, in some cases, government-funded lawyers. Under the ban, they can be expeditiously expelled without those protections.

Migrant advocates said the shift puts the children at risk of kidnapping or other exploitation.

“When you send kids back without any precautions, without any screening, you create a situation in which traffickers, smugglers and people who want to take advantage of them are literally waiting for them in these border towns,” said Michelle Brané, the director of migrant rights and justice at the Women’s Refugee Commission.

The issue of deportees being returned to Guatemala has become especially sensitive as the country attempts to contain its own coronavirus outbreak.

For weeks, the authorities have evaluated the health of deportees arriving at the airport in Guatemala City to screen for possible infection. Those who have a higher-than-normal temperature or other potential symptoms are whisked to a special hospital and tested for Covid-19, officials said.

This past week, Guatemala’s health minister, Hugo Monroy, said American deportation flights were aggravating the outbreak in Guatemala by returning people already infected with the virus, and the foreign minister, Pedro Brolo, repeated the complaint on Friday.

The United States, Dr. Monroy said, “has practically become the Wuhan of America.”

Various Guatemalan officials have put the number at between 30 and 43, most of them apparently aboard two flights that arrived on March 26 from Mesa, Ariz., and on Monday from Brownsville, Texas.

In a televised speech late Friday, President Alejandro Giammattei of Guatemala weighed in, saying that technicians from the C.D.C. had randomly tested 12 deportees who had arrived on the Monday flight and that all the tests had resulted positive on Friday.

He said that a suspension of deportation flights that began on Thursday would continue until the United States was able to assure Guatemalan officials that deportees were being returned “free of the coronavirus.”

Mr. Giammattei said he was allowing one exception to the suspension: a deportation flight that would return 12 unaccompanied minors who had been caught trying to cross the southwestern border of the United States.

ICE officials said the agency was conducting a “visual screening” of all deportees and checking temperatures before boarding on chartered deportation flights. Under new guidance announced on Friday, the agency said, any detainee with a temperature of 99 degrees or higher would be immediately referred to a medical provider for further evaluation and observation.

Guatemalan officials reported a total of 235 confirmed cases of Covid-19 in the country and seven deaths as of late Friday. The official tally includes the 12 deportees who were found to test positive by the C.D.C. on Friday and at least five people who were returned from the United States on deportation flights in recent weeks, officials said.

There is evidence that Guatemalans may be growing increasingly suspicious of returning migrants for fear they may be importing infection.

On Wednesday, Mr. Giammattei said that several community councils in Quetzaltenango, a city in the western highlands of the country, had planned to burn down a government building where 80 deportees were being quarantined.

Residents in the area had feared that the deportees, who had been sent overland from a neighboring country, posed a health threat to the community.

“They wanted to burn the people,” Mr. Giammattei said of the community councils during a televised address. The deportees had been given medical screenings, he said, and none were found to be infected. “They don’t pose a risk to anyone,” he said.

Even as the coronavirus pandemic has posed serious new threats to those held in crowded custodial settings, ICE officials have said the agency is continuing with “mission critical” arrests of immigrants without legal status.

The agency is facing a flurry of lawsuits seeking the release of people in immigration custody. ICE says that 124 detainees in its custody have been confirmed to have the coronavirus, along with 30 agency employees who work at detention centers.

Democrats on the Senate Judiciary Committee sent a letter this month accusing the Department of Homeland Security of “exploiting the Covid-19 pandemic by claiming new, sweeping powers to summarily expel large, unknown numbers of individuals arriving at our border in clear contravention of existing federal laws.”

The senators, led by Patrick Leahy of Vermont, said the department was “blatantly misinterpreting its limited authorities” in enforcing the border closure.

The Trump administration has also pushed ahead with court hearings for detained migrant children who were already in the United States when the border restrictions came down.

Though requirements that the children appear in court have been waived to allow for social distancing, judges continue to take up their cases, including for children who do not have lawyers, according to Anthony Enriquez, director of the Unaccompanied Minors Program at Catholic Charities in New York, a group that advocates for migrant children.

In those cases, Mr. Enriquez said, immigration judges are calling nonprofit legal service providers to ask whether lawyers would like to volunteer as “friends of the court” and offer information to help inform the judges’ decisions.

“When you put all these pieces together, whether consciously or not, it starts to look like the administration is railroading these detained children into deportation as quickly as possible,” Mr. Enriquez said.