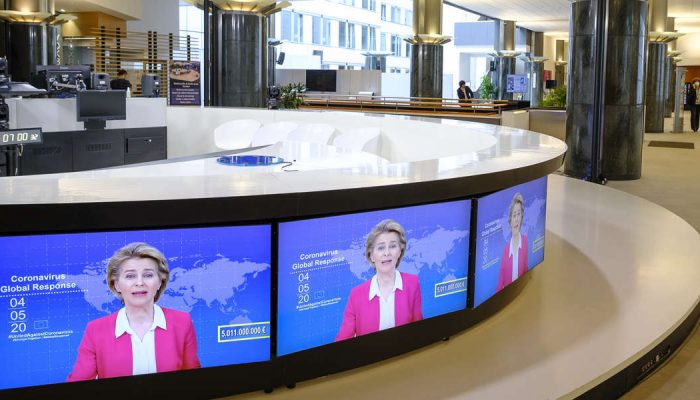 The Trump administration didn’t attend a virtual summit on Monday during which many world leaders came together to pledge money toward coronavirus vaccine development.

The Coronavirus Global Response pledging event was led by European Commission President Ursula von der Leyen and included leaders from the European Union as well as countries including Canada, France, Germany, Italy, Japan, the Kingdom of Saudi Arabia, Norway, Spain, and the United Kingdom. The event’s organizer said it registered $8 billion in pledges from donors worldwide.

The U.S. declined to participate, according to the Washington Post.

“Today the world showed extraordinary unity for the common good. Governments and global health organisations joined forces against coronavirus,” von der Leyen said. “With such commitment, we are on track for developing, producing and deploying a vaccine for all. However, this is only the beginning.”

While the pledge conference was going on, the Trump administration held a telephone briefing for reporters. During the conference, senior officials repeatedly praised the U.S. as a “leader” in the fight against COVID-19.

“Many of the organizations and programs this pledging conference seeks to support already received very significant funding and support from the U.S. Government and private sector, and we would welcome additional high quality, transparent contributions from others,” a senior administration official told reporters from several major outlets, while repeatedly refusing to go into detail about why the U.S. was absent from a meeting.

It was the second time in recent weeks that the U.S. skipped an international meeting regarding the virus, the first being an April COVID-19 meeting for G20 member countries, organized by the World Health Organization (WHO) NPR’s Michele Kelemen reported. Keleman also cited the U.S. vowing to suspend funds to the WHO and accusing the U.N. agency of being “too China-centric” as a reason for the country’s absence at global meetings.

Some public health officials, including Jeremy Konyndyk, a senior policy fellow at the Center for Global Development, were reportedly surprised at the administration’s absence from the most recent summit on vaccines.

“It’s the first time that I can think of where you have had a major international pledging conference for a global crisis of this kind of importance, and the U.S. is just absent,” Konyndyk told the Washington Post, adding that it’s crucial to back multiple vaccine development efforts working in parallel since no one knows which one will succeed first.

During a Sunday Fox News town hall at the Lincoln Memorial, Trump claimed that a coronavirus vaccine would be ready by the end of 2020, which contradicts health officials, as well as companies developing potential vaccines.

About the Author: Johanna Silver