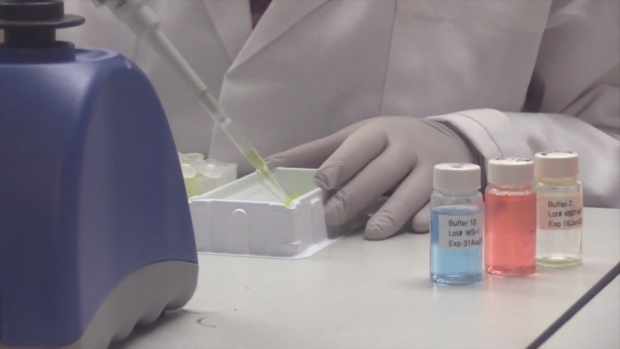 
VANCOUVER —
While Phase 2 of B.C.’s reopening plan has eased some restrictions related to COVID-19, other things like large gatherings won’t be able to happen again until a vaccine or treatment is available. So how long could that take?

According to UBC pharmaceutical sciences professor Dr. Fawziah Lalji, while it’s difficult to predict an exact timeline, if things go well with clinical trials, she anticipates we might be looking at a vaccine in 12 to 18 months.

“I feel that there is so much collaboration going on and (it’s the) first time I’ve seen so much funding into a vaccine program,” Lalji said, and added there are currently 169 vaccine candidates worldwide.

One is being tested in Canada’s first clinical trial, a joint effort between Dalhousie University and a Chinese company, which is already in phase two.

“It seems to be the furthest along and it hasn’t had any safety issues so far, so I’m kind of keeping my eye on that,” Lalji said.

Antibody testing, like the kind that was recently approved by Health Canada, will also help researchers understand what immunity may look like.

“Individuals who had SARS-COVID-1, who had a severe infection, immunity lasted about three years for them. But we know from a common cold, which is also a coronavirus, it only lasts a month,” Lalji said. “We kind of have to do long-term studies in those patients to see how fast is it waning over time, and whether we are going to need another booster dose, or every year dose like the flu vaccine, or whether it’s going to be forever like measles.”

Lalji said phase one of human trials for a vaccine involve a small number of patients, usually about 50, and focus on safety. Phase two looks at different doses and age groups, and checks to see if the vaccine is producing the necessary antibody levels. Phase three is a large trial that involves thousands of patients, which also looks at efficacy and safety.

While developing a new vaccine used to take up to 15 years or more, Lalji said more recent vaccines have been created more quickly. During the pandemic, those timelines are being compressed even more.

That means some stages of clinical trials may overlap with others, for example, moving on to the next phase before the results are all in from the last one.

“It just means that if there is an issue that comes up much later on, and you’re already quite far into a phase three study, then it may mean that you’ve lost all that money, because now you can’t bring it to market,” Lalji said.

But despite the compressed timeline, Lalji said there is a lot of oversight of the process in Canada when it comes to safety.

She said there is an independent safety board that looks at issues and adverse events during ongoing trials, and all data ultimately goes through Heath Canada as well. In addition, an expert panel with the National Advisory Committee on Immunization gives its recommendations after reviewing the literature. After the vaccine is in use, Lalji said there is a post-marketing surveillance program that tracks any issues, which are reported to the Public Health Agency of Canada.

“Canada has a lot of different processes to ensure safety of the vaccine,” Lalji said. “I think there are many checks and balances.”

Of the dozens of vaccine candidates around the world, Lalji noted a significant proportion will likely fail.

“Just because it works on a computer or works in the animal model, doesn’t necessarily mean to say it’s going to work on the humans,” Lalji said. “But I think that’s fine, because we have so many candidates to work with, and so much diversity in terms of the different platforms that they’re using as well, so I think we have a good shot.”

Researchers are also working on a method to treat COVID-19 in infected patients, with a goal of reducing mortality from the illness.

Principal investigator of the Canadian Treatments for COVID-19 trial Dr. Srinivas Murthy said the World Health Organization is co-ordinating a global clinical trial, looking first at re-purposed medications traditionally used for other conditions, such as HIV, which are available right now.

Murthy said it’s not a search for a “magic bullet,” but rather treatments that can individually reduce the death rate even by a couple of percentages.

“In theory, we should have answers, or at least preliminary answers over the coming weeks about which treatment may or may not be effective,” Murthy said, and added because not every treatment may not available to every patient, it’s important to continue to evaluate other therapies as well.

About the Author: Maria Weisgarber