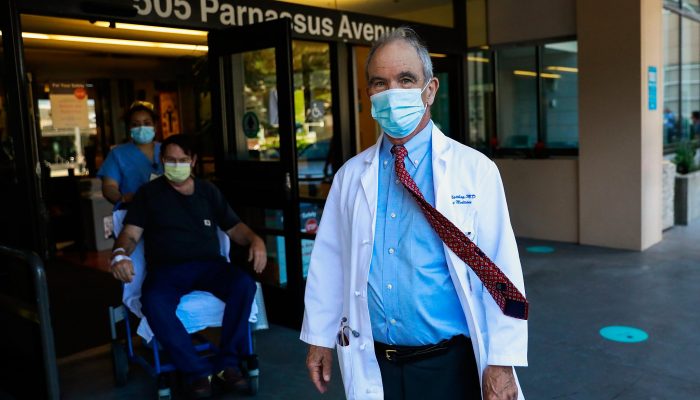 UCSF’s Dr. Michael Matthay wasn’t thinking about a pandemic in January when he launched a clinical trial to investigate whether certain stem cells could effectively treat a serious form of respiratory failure.

Then the coronavirus came to the United States. Now, most of the people who are part of the trial Matthay is leading in San Francisco and other locations have COVID-19, the disease caused by the virus. Many patients with severe cases of COVID-19 develop acute respiratory distress syndrome, or ARDS, which was the impetus for Matthay’s study. ARDS is often caused by pneumonia but can also be triggered by other critical illnesses or major injuries.

The trial is using intravenous doses of mesenchymal stem cells, which are found in bone marrow and umbilical cords, to treat people afflicted with the respiratory syndrome. COVID-19 patients who develop ARDS are in the most dire group of those infected by the coronavirus: They are the ones who need ventilators and all too often die.

Matthay hopes the stem cells he is investigating can reduce inflammation, which is associated with severe COVID-19 symptoms, and help damaged lungs begin to repair themselves. The goal is to get extremely ill patients off ventilators faster and boost their chances of survival.

“They have multiple mechanisms of benefit,” Matthay said of the stem cells he is testing. “They reduce injury to the lung, whatever the cause — whether it’s bacterial pneumonia or viral pneumonia — and they seem to enhance the time to recover.”

Stem cells are like the body’s building blocks: They create a full person from an embryo in the early stages of life and, in adults, replace aging cells in bones, blood and elsewhere. California has invested billions of dollars in public funds to advance stem cell therapies over the last 15 years or so and, while researchers have made some important progress, a 2018 Chronicle series found that the advancements did not live up to the original promise of the 2004 ballot measure that funded the scientific endeavor.

Matthay’s work on ARDS and COVID-19 could be a greatly beneficial tool to fight the pandemic, if it proves successful. He brings about 30 years of experience caring for patients afflicted by ARDS, and the mesenchymal stem cells he is testing already cleared two safety trials, one in 2015 and another in 2018. The cells do not run the risk of being rejected like a mismatched blood transfusion and were promising in animal tests, he said.

The current clinical trial aims to enroll 120 patients, half of whom will receive a placebo. Most, but not all, who enrolled so far have had COVID-19, according to Matthay. UCSF Parnassus, San Francisco General Hospital and UC Davis Medical Center are participating, as are hospitals in Portland, Seattle, Houston and Nashville.

The trial should be complete in six months to one year, Matthay said.

He and others involved in the stem cell research are making a concerted effort to enroll a diverse group of patients, including uninsured people and those from low-income communities of color who have been disproportionately impacted by the pandemic but may not be sufficiently represented in many other clinical trials.

A lack of diversity in clinical trials was an issue before the pandemic, said Dr. Kirsten Bibbins-Domingo, professor and chair of epidemiology and biostatistics at UCSF. She is not involved in the stem cell trial and does not know Matthay.

“It’s a well-known, well-documented problem,” Bibbins-Domingo said. “As researchers — especially those who are federally funded using taxpayer dollars and public trust — we have an obligation to do research that is relevant to the populations that we intended to benefit from this research. That is our obligation.”

To help address the problem, Matthay’s stem cell trial includes San Francisco General, a safety net hospital that serves patients regardless of whether they have health insurance, and UC Davis Medical Center, which serves a broad spectrum of patients.

“If you’re only doing trials at the university medical centers like (UCSF) Parnassus or Stanford, many of the potential patients who don’t have full insurance and aren’t covered by the current health care system won’t end up at your hospital — they’ll end up at S.F. General,” Matthay said.

As of last week, 14 patients were enrolled in the study at San Francisco General, said Dr. Carolyn Hendrickson, the trial’s site principal at the hospital. Ensuring that patients from a variety of different backgrounds participate in clinical research is a “principle of justice,” she said.

“We just don’t know if we’re always making the right decisions for a more diverse group of patients when they haven’t been represented in the data used to make those decisions,” Hendrickson said.

Matthay recently secured $750,000 in funding from the California Institute for Regenerative Medicine, the state’s stem cell agency, that is allowing him to expand the trial to UC Davis.

Like the others pursuing the more than 200 potential coronavirus treatments being studied worldwide, Matthay has no guarantee that the stem cells he’s studying will be useful in treating COVID-19. But it’s worth a shot, said Jonathan Thomas, the board chairman of the regenerative medicine institute.

“Given that we’re dealing with something the world’s never seen before, it behooves everybody who has potential ideas to be heard,” Thomas said. “The notion of stem cell-related treatments … is something that at least we have to give the opportunity to have a full consideration.”

Even if the cells prove effective, however, they will run into the same logistical challenge as all other COVID-19 therapeutics: making enough of the drug to be distributed on a massive scale. Matthay said that technological advancements in the stem cell field have improved the ability to produce many of them quickly, though it still takes about 10 to 12 days. Scientists could take a small amount of them from donors and use those to grow the cells in large numbers.

“New culture methods make it possible to scale it up dramatically,” Matthay said. “That would not be a major limitation.”

About the Author: J.D. Morris