Home Dallas Covid News Unlike Lyft and Uber, Dallas-based Alto was built for a global pandemic 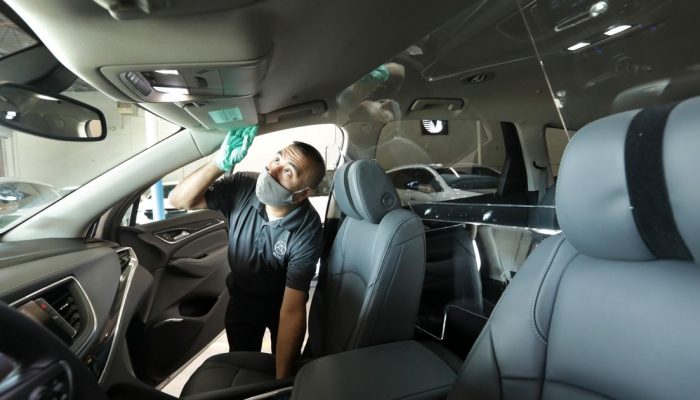 Think about how many high-touch surfaces are in a car: the door handle, steering wheel, seat belt, buckle, window switches and headrest.

That’s why ridesharing is on the list of luxuries many Americans gave up in mid-March to help stop the spread of COVID-19 — even though Uber, Lyft and Dallas-based Alto continued to operate.

Alto, the homegrown entrant trying to disrupt the giants with more personalized service, said it saw about a 90% drop in ride volume from February to March due to stay-at-home orders. For May, Lyft rides were down about 70% compared to the same month last year, according to a regulatory filing. Uber’s most recent data is from the first quarter through March 31, which showed rides decreased by 3% year-over-year.

“What we saw in late March and early April has been accepted as the single largest shock in the transportation industry ever,” said Alto CEO Will Coleman. “It was dramatic.”

But as people open their rideshare apps again, there’s only so much mega rideshare companies Lyft and Uber can do to ensure their millions of drivers follow updated safety precautions.

And that means this may be Alto’s time to shine — and gain market share.

Launched just over a year ago with a focus on safety, Alto seems like it was built for a global pandemic.

Alto manages its own fleet of about 65 vehicles — with a security camera installed in each one — and provides a salary, benefits and sick leave to its approximately 130 drivers, all located in Dallas-Fort Worth.

Gregory Brown sprays PermaSafe disinfectant in a vehicle at Alto headquarters in Dallas. PermaSafe is a hospital-grade sanitizing mist that kills 99.9% of bacteria and viruses, including emerging pathogens like COVID-19. (Jason Janik / Special Contributor)

That means when COVID-19 hit, Alto was easily able to start providing masks, gloves and sanitation training for its drivers, as well as check their temperatures before each shift. As for its cars, all of them quickly received plexiglass barriers between driver and rider, a hospital-grade sanitizing mist that kills 99.9% of bacteria and viruses, including COVID-19, and, finally, HEPA air filters — the same used in hospitals — to provide clean air.

Meanwhile, Uber and Lyft have had to scramble to organize shipping out millions of masks to its drivers in hopes they’ll wear them.

Uber said it spent $50 million on supplies, including face masks, hand sanitizer and bleach wipes. Both companies will require drivers and riders to verify they’re wearing a mask either by completing an in-app checklist or, if you’re an Uber driver, by taking a selfie. They also both ask passengers to sit in the back seat and open the window. If either rider or driver feels unsafe, they’re encouraged to cancel the ride.

Because Uber and Lyft use independent contractors, they aren’t legally allowed to force drivers to undergo a temperature check, said rideshare expert Harry Campbell, who runs a popular website for drivers called The Rideshare Guy. He said Alto is in a good position to gain market share in Dallas because Uber and Lyft can’t compete with it on safety measures.

“I think there’s a lot more Uber and Lyft could do but I just don’t see them being able to enforce a lot of the typical safety measures that should be taken,” he said.

“Uber and Lyft, I don’t believe their structure allows them the control to do what I would require to ride with them,” he said.

Coleman said he’s had messages from Alto users who say before COVID-19, they used to use Lyft and Uber when they wanted to save money, but now they won’t use anything but Alto.

Campbell said he used to be skeptical about riders being willing to pay more for a safer ride but thinks COVID-19 could change that.

“Covid19 is forcing rideshare customers to rethink things,” he said.

An Alto ride tends to be twice as much as an economy ride with Uber or Lyft. However, a $12.95 monthly membership can save you 30% on rides with zero booking fees.

The premium pricing is on purpose as Alto learned from the mistakes of Lyft and Uber, which have millions of users but are still not profitable. When Uber debuted on the stock market in May 2019, it warned investors that it “may not achieve profitability.”

While Coleman didn’t provide a date for when he thought Alto would be profitable, he noted that the startup reached profitability on a gross margin basis just 10 months after it launched — something it lost for March, April and May, but expects to return in July or August.

Alto drivers like Jorge Pineda must pass a fingerprint background check before being hired. Unlike Uber and Lyft, Alto drivers receive a salary rather than being paid on a per-ride basis. (Jason Janik / Special Contributor)

A huge reason for Alto’s survival the past few months was its quick conversion into a delivery service out of pure necessity after rides dropped 90%, Coleman said. The delivery business launched in mid-March and grew faster in its first month than Alto’s rideshare service did in its first month in January 2019, he said.

Alto was able to sign up 70 to 80 restaurants to its delivery option, called Concierge, which delivers to the Dallas-Fort Worth area. But it’s not just food; Coleman said his drivers can deliver anything. The Market from Alto is an option on its app and website that lets users pick from a list of curated items, such as Father’s Day gifts, summer party decorations, Alto-branded hand sanitizing spray and small succulents.

With everyone stuck at home but still needing to eat or have essentials like toilet paper delivered, it’s no surprise that delivery services skyrocketed.

While Uber’s rides were down 3% for the first quarter, its Uber Eats delivery service was up 54% — and that’s just through March 31.

Another benefit of higher prices and a new booming delivery service is that Alto didn’t need to lay off any full-time drivers, although some part-time drivers weren’t able to find shifts. Last week, Alto hired 10 new employees. Meanwhile, Uber laid off 25% of its workforce during the COVID-19 outbreak, while Lyft laid off 17% of its staff.

Building a delivery business almost overnight means Alto’s expansion plans have been pushed back slightly. However, it still plans to be in Houston by August or September and in California by year’s end, Coleman said. The company’s coverage has grown from 70 square miles to over 1,300 across North Texas in 17 months. Alto will continue to invest all of its profit back into the business to expand its locations, Coleman said.

Alto has gone for quality over quantity since launching. Many drivers work for both Lyft and Uber, depending on which is more busy at the moment. And many riders have both the Lyft and Uber apps on their phones and choose whichever is cheapest. Coleman said he wanted something more than just a price tag to set Alto’s service apart.

“Our safety measures are in the spotlight now, but it’s always been our differentiator since launching,” Coleman said. “When we get as big as Lyft or Uber, we will still be offering these same things.”