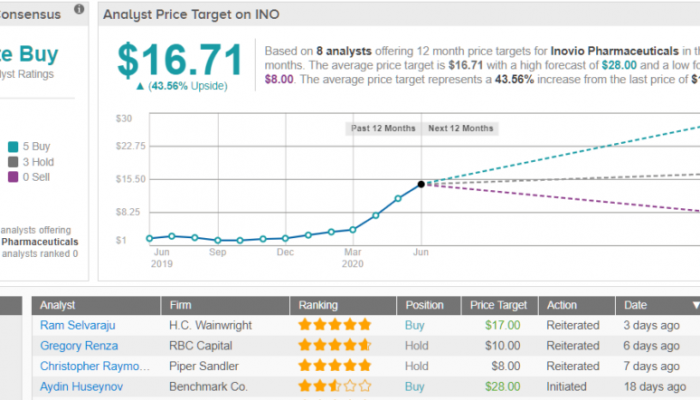 
Global economies have started reopening, yet the battle against COVID-19 wages on. Researchers and healthcare organizations are racing to develop a vaccine capable of preventing COVID-19 infections, and Wall Street is speculating as to who will emerge victorious.

To this end, investor focus has locked in on Inovio Pharmaceuticals (INO). On June 4, Inovio, the International Vaccine Institute (IVI) and Seoul National University (SNU) Hospital announced they would collaborate on the initiation of a Phase 1/2 trial of INO’s COVID-19 DNA vaccine, INO-4800, in South Korea later this month. This will mark the country’s first COVID-19 vaccine clinical study, with it being funded by the Coalition for Epidemic Preparedness Innovations (CEPI) through INO, and supported by both the Korea Center for Disease Control and Prevention of Korea National Institute of Health.

Taking a closer look at the study’s design, it is broken down into two stages. These include the evaluation of the candidate’s safety, tolerability and immunogenicity as well as enrollment expansion for an additional 120 participants.

Commenting for H.C. Wainwright, 5-star analyst Raghuram Selvaraju stated, “In our view, the timely initiation of a Korean clinical study of INO-4800—barely two months after the start of the U.S. study—could support the clinical program for INO-4800 in the U.S., which is slated to report Phase 1 data later this month, and should provide a foundation for further clinical development and potential commercial launch in South Korea, which has a population of 52 million.”

Adding to the good news, INO’s U.S. Phase 1 trial assessing INO-4800 is progressing on schedule, with preliminary results slated for release later this month. It should also be noted that animal challenge studies in multiple animal models including non-human primates are being conducted, and the company plans on kicking off a Phase 2/3 efficacy trial this summer. “We believe that data from this randomized trial and animal challenge studies could, if positive, allow the company to file for emergency regulatory approval for INO-4800,” Selvaraju commented.

Also working in the company’s favor, preclinical data for the INO-4800 DNA vaccine demonstrated the candidate stimulated neutralizing antibodies and T cell responses in mice and guinea pigs. Expounding on this, Selvaraju noted, “In addition, these antibodies were detected in the lungs of the vaccinated animals, and high levels of Spike-specific T cell responses were observed. In our view, these animal data bode well for the upcoming data from multiple animal challenge studies and data readout from the ongoing U.S. Phase 1 study.”

As INO published positive data from the Phase 1/2 trial of immunotherapy INO-5401 plus INO-9012 in combination with LIBTAYO in glioblastoma multiforme (GBM) patients and the REVEAL 1 Phase 3 data readout is on track, Selvaraju stayed with the bulls. He reiterated a Buy recommendation and $17 price target, suggesting 46% upside potential. (To watch Selvaraju’s track record, click here)

Looking at the consensus breakdown, 5 Buys and 3 Holds have been assigned in the last three months, making the analyst consensus a Moderate Buy. At $16.71, the average price target indicates shares could climb 43% higher in the next year. (See Inovio stock analysis on TipRanks)