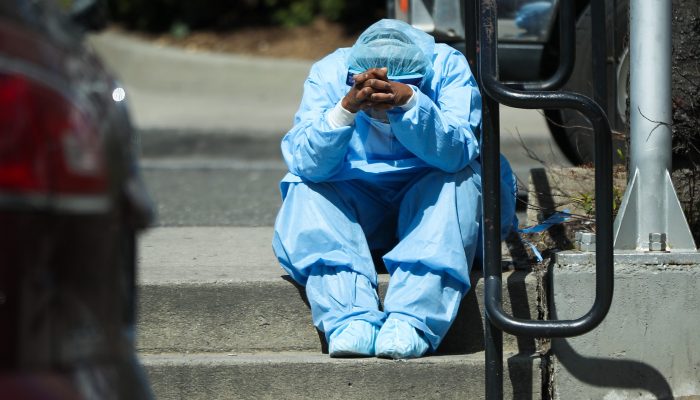 
A sad and tired healthcare worker is seen by the Brooklyn Hospital Center in New York, United States on April 1, 2020.

The United States just had its deadliest day on record due to the coronavirus as states across the country begin to ease restrictions meant to curb the spread of the virus, according to data published by the World Health Organization.

The U.S. saw 2,909 people die of Covid-19 in 24 hours, according to the data, which was collected as of 4 a.m. ET on Friday. That’s the highest daily Covid-19 death toll in the U.S. yet, based on a CNBC analysis of the WHO’s daily Covid-19 situation reports.

Before May 1, the next highest U.S. daily death toll was 2,471 reported on April 23, according to the WHO. State officials have previously warned that data on Covid-19 deaths are difficult to analyze because they often represent patients who became ill and were hospitalized weeks ago.

Representatives of the WHO did not immediately respond to CNBC’s request for comment.

The country’s deadliest day comes as state officials weigh reopening parts of the economy and easing stay-at-home orders. Public health officials and epidemiologists have warned that as the public grows fatigued by restrictions and businesses reopen, the virus could spread rapidly throughout communities that have yet to experience a major epidemic.

Protesters in at least 10 states on Friday demanded that the government lift stay-at-home orders and other emergency measures put in place to slow the spread of the coronavirus. Among the states that saw protests are California, Colorado, Delaware, Florida, Illinois, New Jersey, New Mexico, New York, Tennessee and Washington.

Dozens of states have unveiled reopening plans and several, including Georgia, South Carolina, Tennessee and Texas, have already begun to allow nonessential retailers to reopen.

New York state, which has reported more than 27% of all confirmed cases in the U.S., according to data compiled by Johns Hopkins University, has borne the brunt of the U.S. outbreak so far. The state has reported at least 24,039 of the country’s 65,173 Covid-19 deaths, according to Hopkins.

The toll of the deadliest day of Covid-19 in the U.S. rivals that of the September 11, 2001 terrorist attacks, which claimed the lives of 2,973 people in one day, according to a government commission.

The WHO data differs from data collected by the U.S. Centers for Disease Control and Prevention, which does not report historical daily Covid-19 deaths. The CDC’s site says that 2,349 people died in the U.S. of Covid-19 on May 1.

However, the agency warns that its data might not be complete. CDC spokeswoman Kate Grusich told CNBC that the agency’s data is “validated through a confirmation process with jurisdictions.”

“CDC does not know the exact number of COVID-19 illnesses, hospitalizations, and deaths for a variety of reasons,” the agency says, adding that asymptomatic patients, delays in reporting and limited testing make it difficult to accurately track the data.

Some cities, such as New York City, have struggled to gain a complete understanding of the Covid-19 death toll. Many patients die at home and others are attributed to heart attacks or other conditions that might have been exacerbated by Covid-19, New York City Mayor Bill de Blasio said last month.

Further complicating the system for reporting Covid-19 deaths is that the mortuary system in hard-hit cities like New York is overwhelmed by the surge of victims. Funeral homes, caught in the middle of the bottleneck, have had to store corpses in refrigerated trucks, or in some cases whatever storage unit they can find.

The CDC warns that all data right now is “provisional” and the agency might not have a more accurate count until December of next year.

The EUA means that remdesivir has not undergone the same level of review as an FDA-approved treatment, according to a fact sheet from the agency on the drug. However, doctors will be allowed to use the drug on patients hospitalized with the disease even though the drug has not been formally approved by the agency.

The intravenous drug has helped shorten the recovery time of some hospitalized Covid-19 patients, new clinical trial data suggests. Without other proven treatments, health-care workers will likely be considering its use.

The FDA previously authorized the emergency use of malaria drugs chloroquine and hydroxychloroquine to treat Covid-19. However, it later issued a warning against taking the drugs outside a hospital or formal clinical trial setting after it became aware of reports of “serious heart rhythm problems” in patients.

Under the EUA, the FDA will allow the drug to be administered for either a five-day or a 10-day dose. A 10-day treatment regimen is preferred for intubated patients.

The company said it will continue to support clinical trials and expand so-called compassionate use programs for remdesivir.