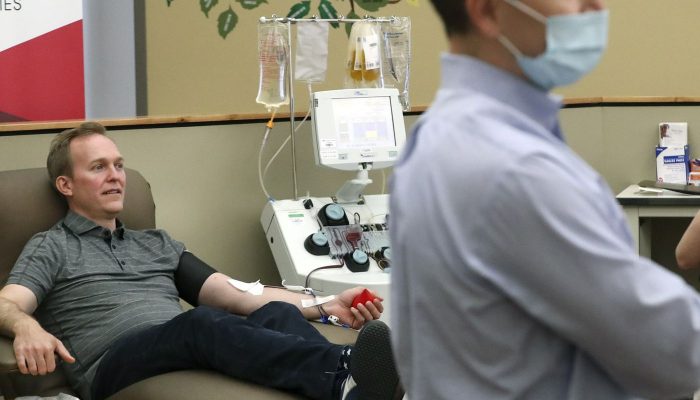 
SANDY — Utah Rep. Ben McAdams may have saved up to four lives on Thursday, some researchers think. And it is his second time doing it, so he’s potentially up to eight.

“That’s more lives I’ve saved than any other day,” he joked.

The Democratic congressman, who recently recovered from COVID-19, is donating his antibody-rich plasma at ARUP Laboratories, to be used in patients at University Hospital who are fighting for their lives with the same illness.

“The hope is that it helps them do better,” said Dr. Ryan Metcalf, medical director at ARUP and University of Utah Transfusion Services. He said preliminary findings of the FDA-sponsored, Mayo Clinic-led expanded access treatment protocol using donated plasma to treat hospitalized COVID-19 patients shows it is not hurting them.

“As far as we can tell, it is not causing harm,” he said, adding that a more randomized controlled clinical trial is needed to prove it works.

Rep. Ben McAdams, D-Utah, gives a plasma donation at the ARUP Blood Services donor center in Sandy on Thursday, May 21, 2020. McAdams, who was hospitalized for COVID-19 in March, gave a plasma donation in April after tests showed he had fully recovered. The plasma will be used in a study on potential COVID-19 treatment.

Similar investigative treatments — transfusing plasma from someone who has developed antibodies to a virus with no known treatment or vaccine available — were effectively used in the 1918 influenza pandemic, in SARS-CoV-1 in 2003 and the 2009 H1N1 outbreaks, as well as to treat Ebola, Metcalf said.

“Because their immune system has already responded,” he said, the antibodies in the blood have the potential to bind to and neutralize the virus, preventing the replication of cells in another patient.

Metcalf said the sicker COVID-19 patients are, the stronger their antibody response tends to be. Plasma from people who didn’t experience symptoms but have COVID-19 antibodies isn’t as helpful, he said.

Because COVID-19 is still new, there isn’t a lot of data to show whether convalescent plasma will work, but Dr. Emily Spivak, associate professor of infectious diseases at the U.’s School of Medicine, said she is optimistic about the potential.

“I suspect convalescent plasma may play some role in modifying the severity of disease, but it has to be more rigorously studied to prove that,” she said. The pandemic conditions, Spivak added, have spurred unprecedented collaborations at the U. and across the globe to study potential treatments.

“It was the sickest I’ve ever been,” McAdams, who is 45 and “relatively healthy,” said. He was sick in late March for 16 days and spent eight of those in the hospital after he experienced difficulty breathing and had little to no energy. McAdams said he lost 13 pounds during that time.

“It wiped me out,” he said, adding that he’s grateful the experience can be put to good use.

“If my experience can somehow play a small part in helping relieve suffering for other patients with COVID-19, I’m glad to participate,” McAdams said.

ARUP began collecting plasma donations in April and now has stores from 10 recovered patients in Utah. It has already been used to treat two local patients, joining the 14,000 others as part of the nationwide Mayo Clinic program. The Utah labs are still recruiting convalescent plasma donors, which has been harder to do here, as there have been fewer cases in Utah.

Spivak said it’s a “fascinating” time for her, as transfusing blood is one of the more archaic or antiquated treatments in the history of medicine. Though convalescent plasma, she said, is one of the first treatments available in times of pandemic or viral outbreaks.

Rep. Ben McAdams, D-Utah, gives a plasma donation at the ARUP Blood Services donor center in Sandy on Thursday, May 21, 2020. McAdams, who was hospitalized for COVID-19 in March, gave a plasma donation in April after tests showed he had fully recovered. The plasma will be used in a study on potential COVID-19 treatment.

The Utah Department of Health on Thursday reported 7,874 confirmed cases of COVID-19 in Utah, including two additional deaths, both in Salt Lake County, bringing the total number of COVID-19-related fatalities in the state to 92.

The state has tested more than 182,874 for the virus and Utah health officials estimate that more than 4,596 of the confirmed cases have recovered from the infection.

The latest breakdown of cases, hospitalizations and deaths by health district:

About the Author: Wendy Leonard