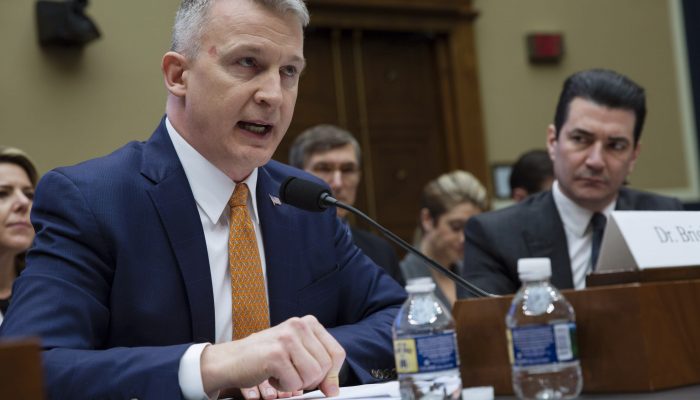 A doctor who was removed as head of the federal agency that is helping develop a vaccine for the coronavirus said he was ousted after resisting widespread adoption of a drug promoted by President Donald Trump as a treatment for Covid-19.

Dr. Rick Bright also said that he believed he was removed from his post because he insisted that “the billions of dollars allocated by Congress to address the Covid-19 pandemic” be invested “into safe and scientifically vetted solutions, and not in drugs, vaccines and other technologies that lack scientific merit.”

“I am speaking out because to combat this deadly virus, science — not politics or cronyism — has to lead the way,” Bright said in a statement, which was first reported by The New York Times.

“Rushing blindly towards unproven drugs can be disastrous and result in countless more deaths. Science, in service to the health and safety of the American people, must always trump politics,” said Bright, who until earlier this week was director the Biomedical Advanced Research and Development Authority.

Bright and his lawyers also called for investigations of his abrupt transfer out of his post at time when the United States is the global epicenter of the coronavirus outbreak.On Wednesday, there more than 830,700 reported Covid-19 cases in the U.S., with more than 45,600 related fatalities to date.

The White House declined to comment on Bright’s statement.

The Health and Human Services Department, which oversees BARDA, did not immediately respond to a request for comment.

When Bright was removed from his post leading BARDA, he was given a job, with fewer responsibilities, at the National Institutes of Health, HHS has said.

Dr. Scott Gottlieb, the former commissioner of the U.S. Food and Drug Administration under Trump, on Wednesday told CNBC on Wednesday that he had worked closely with Bright while leading the FDA.

“He was very good at running that agency [BARDA], and I think it’s a loss to see him step out of that job right now,” said Gottlieb. “That’s a position that’s really criticial to trying and getting some of these therapeutics [treatments for coronavirus] over the finish line.”

“It’s an unfortunate to see a loss of continuity in that position at really a critical time from a public health standpoint in the history of that agency.”

Bright, in his statement, said, “Sidelining me in the middle of this pandemic and placing politics and cronyism ahead of science puts lives at risk and stunts national efforts to safely and effectively address this urgent public health crisis,.”

He said that he will ask HHS’ inspector general, an internal ethics watchdog, to “investigate the manner in which this administration has politicized the work of BARDA and has pressured me and other conscientious scientists to fund companies with political connections and efforts that lack scientific merit.”

Bright’s attorneys, Debra Katz and Lisa Banks, said in a prepared statement that “the Administration’s removal of Dr. Bright from his position as director of BARDA is retaliation plain and simple.”

“The results from the Administration’s refusal to listen to the experts and to sideline those like Dr. Bright who point out any errors in the government’s response will continue to be catastrophic for the American people,” said Katz and Banks, whose law firm specializes in representing whistleblowers.

“We will request that the Office of Special Counsel seek a stay of Dr. Bright’s termination and that Dr. Bright be permitted to remain in his position pending the OSC and IG’s investigation of this unlawful forced transfer.”

Katz in 2018 represented Christine Blasey Ford, a Stanford University psychology professor who testified  that she was sexually assaulted by Supreme Court Justice Brett Kavanaugh when they were high school students. Kavanaugh was confirmed for a seat on the high court after Ford’s testimony. Kavanaugh denied her allegations.

In his statement Wednesday, Bright wrote, “My professional background has prepared me for a moment like this — to confront and defeat a deadly virus that threatens Americans and people around the globe.”

“To this point, I have led the government’s efforts to invest in the best science available to combat the Covid-19 pandemic.”

“Unfortunately, this resulted in clashes with H.H.S. political leadership, including criticism for my proactive efforts to invest early into vaccines and supplies critical to saving American lives. I also resisted efforts to fund potentially dangerous drugs promoted by those with political connections,” he wrote.

Bright also wrote, “Specifically, and contrary to misguided directives, I limited the broad use of chloroquine and hydroxychloroquine, promoted by the administration as a panacea, but which clearly lack scientific merit,” he said.

Trump has suggested that those drugs could be effective in treating Covid-19 patients.

An analysis released Tuesday found that there was no benefit to using that drug to treat the coronavirus, and, in fact, that there were more deaths among Covid-19 patients in American veterans hospitals who received hydroxychloroquine compared with those who were given standard care.

Bright wrote, “While I am prepared to look at all options and to think ‘outside the box’ for effective treatments, I rightly resisted efforts to provide an unproven drug on demand to the American public.”

“I insisted that these drugs be provided only to hospitalized patients with confirmed Covid-19 while under the supervision of a physician.”

He added that, “These drugs have potentially serious risks associated with them, including increased mortality observed in some recent studies in patients with Covid-19.”