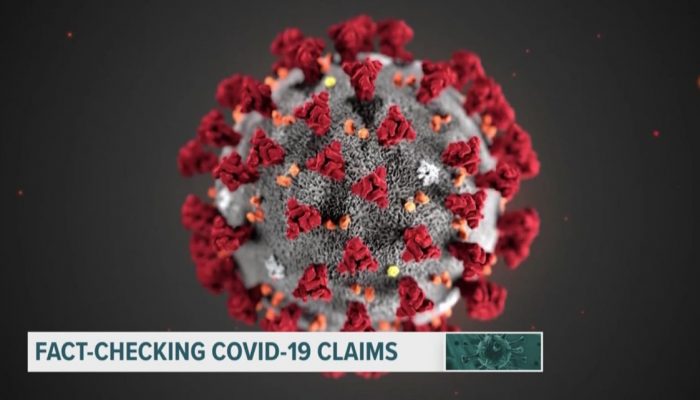 
TYLER, Texas — News outlets frequently share the latest data from state and federal agencies outlining the number of confirmed cases of COVID-19 and deaths resulting from it.

However, there are questions about how those numbers are being reported.

A message to the CBS19 Helpline said that posts on Facebook have indicated that doctors are reporting all deaths right now as COVID-19 deaths, and that they been instructed by their hospitals to do so as a way to get more money.

Dr. John Wayne, the Chief Forensic Pathologist for Forensic Medical Management of Texas, explained that a death certificate is filed either by a doctor, county medical examiner, or Justice of the Peace. His company performs the autopsies for nearly all of East Texas, since the individual counties are not large enough to have their own medical examiners.

He says the autopsy provides probable causes of death and makes recommendations for how the Justice of the Peace completes the certificate.

In looking at a death certificate, Dr. Wayne says it is important to distinguish between Part I and Part II. The Centers for Disease Control and Prevention (CDC) released guidelines in April for the reporting of COVID-19 deaths. It states that Part I, “is for reporting the sequence of conditions that led directly to death,” while “other significant conditions that contributed to the death, but are not a part of the sequence in Part I, should be reported in Part II.”

The Texas Department of State Health Services (DSHS) posted a sample death certificate online. It lists “rupture of myocardium” as the primary cause of death in Part I for the sample decedent, along with three other heart conditions. It then lists diabetes and smoking among the contributory causes in Part II.

Dr. Wayne said having multiple lines in Part I allows the person writing the certificate to use judgement about which of several possibilities was the most immediate in causing death.

In its letter of guidance, the CDC said:

“If COVID–19 played a role in the death, this condition should be specified on the death certificate. In many cases, it is likely that it will be the (underlying cause of death), as it can lead to various life-threatening conditions, such as pneumonia and acute respiratory distress syndrome (ARDS). In these cases, COVID–19 should be reported on the lowest line used in Part I with the other conditions to which it gave rise listed on the lines above it.”

Dr. Wayne mentioned that the order of causes of death does not affect the amount hospitals or medical examiners receive, so there is no financial incentive for including COVID-19 on a death certificate. He explained that anything in Part I is easier to find when it comes to research, and since COVID-19 is a high priority for doctors, scientists, and politicians, the data should be as easy to access as possible.

Money could be involved, however, in a different way. Minnesota State Senator Scott Jensen, who is also a physician, said Medicare reimburses hospitals differently if their patients have COVID-19.

USA Today confirmed hospitals get a lot more money if a patient has COVID-19 or needs a ventilator than if they have a stand-alone case of pneumonia. Since pneumonia and COVID-19 have a similar effect on the lungs and often occur together, Dr. Wayne theorized that a hospital administrator could try to change a patient’s discharge summary to get a larger reimbursement.

He cautioned, though, that he had not heard any reports of that actually happening.

When asked about that concept, a spokesperson for UT Health East Texas said vehemently that it does not put COVID-19 on a patient’s discharge paperwork if they did not have the illness.

About the Author: KYTX