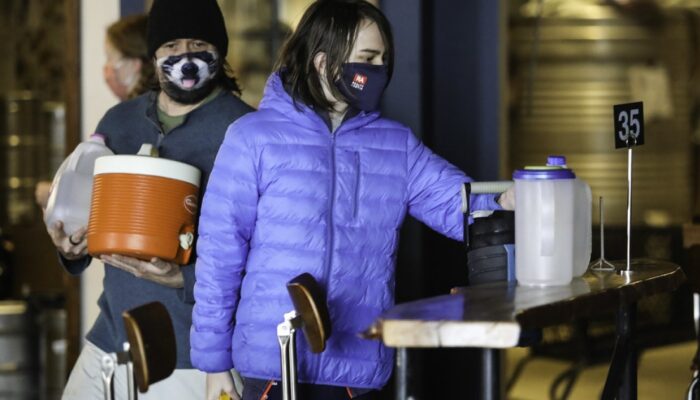 Temperatures climbed into the 50s Saturday, an overdue relief for the thousands of Austinites still without power.

As of Saturday afternoon, about 3,000 Austin Energy customers still had no electricity – a fraction of the 220,000 customers cut off after the Electric Reliability Council of Texas mandated outages at the start of the week. Almost 99 percent of customers now have electricity service.

ERCOT, which operates the state’s power grid, said Friday that the supply of electricity had returned to normal. Still, Texas Attorney General Ken Paxton announced he would launch an investigation of ERCOT and other entities that “grossly mishandled this week’s extreme winter weather.”

RELATED | Where To Find Water In Austin: Breweries Are Giving Out Water For Free – Just Bring A Container

Austin Water on Saturday said production and delivery are now surpassing demand, so more water is going into reservoirs. Officials say customers could see improved service by the end of the weekend. Austin Water Director Greg Meszaros said Friday he hopes to lift the boil-water notice next week, but right now his agency is focused on restoring service.

Travis County was preparing to set up a hub Saturday to distribute 1 million gallons of water to residents in need. The Austin-Travis County Emergency Operations Center says it will prioritize water distribution based on critical needs. The phased distribution will focus on these areas:

Phase 1 (Friday): critical facilities, shelters, warming centers, COVID-19 isolation facilities/protection lodges, medical facilities and first respondersPhase 2 (Saturday): vulnerable populations like seniors, home-bound residents and people with medical or other special needs. That distribution will be coordinated with entities like the Austin Disaster Relief Network and Capital Metro.Phase 3 (Sunday): general public. Locations are expected to be set up in each City Council district and around Travis County.

The hours and locations will be shared over the county’s Facebook and Twitter social media accounts once they are determined.

Follow along for updates throughout the day from the KUT newsroom.

“We are aware of media reports regarding potential massive electric bills for non-Austin Energy customers and want to stress to our customers that Austin Energy will not benefit financially in any way from this winter storm event,” the utility said in a press release.

Austin Energy explained that its base rates are fixed and any changes have to be authorized by Austin City Council.

Residential customers are billed for how much energy they use. Those without power during the storm didn’t have any electricity use recorded from their meters, the utility said. If a customer used more energy this month than normal, their electric bill will be higher, but if they used less, then their bill will be less.

Austin and Travis County have received 10,878 cases of water, which they’re distributing first to shelters and vulnerable populations.

As of noon, they had distributed 5,550 cases to shelters and critical facilities and 1,554 cases to vulnerable groups.

We have currently received 10,878 cases of water to distribute throughout the #ATX community.

They plan to share more information later today on water distributions for the general public.

As the weather warms up, Austin Independent School District is closing its warming centers at Lee, Joslin, Zavala and Barrington elementary schools and Murchison Middle School.

The weather is warming up and our AISD-run warming centers at Lee, Joslin, Murchison, Barrington and Zavala will close. Thank you to our incredible staff, community partners and generous volunteers who made them possible. #AISDProud

The Society of St. Vincent de Paul has received 800 emergency food boxes from the Central Texas Food Bank that it will distribute today at 901 W. Braker Lane.

The food pantry will be open from noon to 5 p.m. Each box has 35 pounds of non-refrigerated food, such as beans, canned veggies and fruit, and tuna. Bread and perishable items aren’t available today.

“The staff and volunteers at the food pantry will distribute the food boxes, given out according to the number of people in the household,” a press release said. “Those being served will be asked to maintain social distancing while they await to receive their food.”

The Federal Emergency Management Agency announced Saturday that emergency aid will be available to people and businesses impacted by the recent severe winter storms. This comes after President Joe Biden approved a major disaster declaration for the state.

The aid is meant to supplement state and local assistance and covers things like grants for housing repairs or temporary housing and low-cost loans to help with losses to uninsured property.

Here are some other updates from the past 24 hours:

The Austin Independent School District has announced classes are canceled for Monday and Tuesday. District official say even as services are restored, families will still face challenges in the aftermath of the recent winter storms. The district expects to entirely virtual instruction Wednesday and Thursday, with Friday planned as an asynchronous learning day. The University of Texas at Austin will not reopen until Wednesday at the earliest. UT officials say some campus facilities have been impacted by recent storms and there is “considerable” work to be done to get the campus ready. Faculty can hold optional lectures, Zoom discussions or office hours until classes resume. Texas State University campuses in San Marcos and Round Rock will resume classes Wednesday at 8 a.m. University offices will reopen Monday morning at 8.