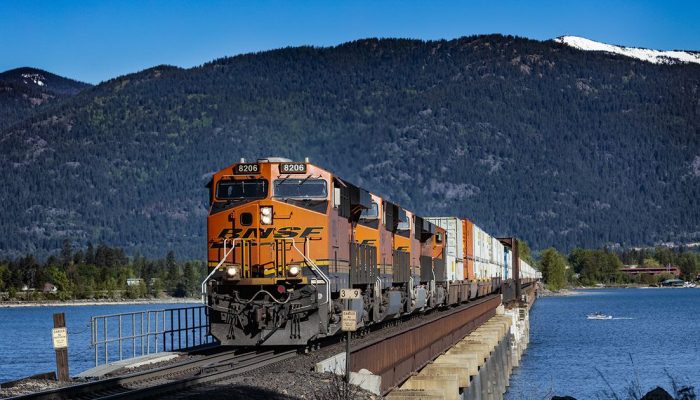 While trains are considered essential businesses, that hasn’t protected the rail industry from the COVID-19 drag.

“COVID didn’t choose which modes of transportation to affect,” said Todd Tranausky, vice president of rail and intermodal at industry research firm FTR. “It hit them all.”

At a time when railroads were already laying off workers in the name of more efficient scheduling, the pandemic caused a significant drop in shipments, leading to even greater job cuts.

Fort Worth-based BNSF, owned by Warren Buffett’s Berkshire Hathaway, has had to reduce its workforce at locations across its network about 32,500 miles of track in 28 states and three Canadian provinces. However, the company — which operates one of the largest rail networks in the U.S. — declined to provide specific figures.

“With the current business environment, BNSF has seen a reduction in volumes as demand has weakened,” spokesman Ben Wilemon said in a statement.

TheLayoff.com, a website that tracks reports of layoffs through anonymous employee postings, indicated that 30 managers were let go at the corporate headquarters at the end of April. BNSF cut its mechanical workforce in Nebraska by 95 people and laid off eight workers and furloughed 28 others in Kansas, according to industry publication RT&S. In addition, three maintenance facilities in Montana and Wyoming were closed, affecting 215 workers.

In the first three months of this year, its revenue fell by 6% year-over-year to $5.4 billion because of COVID-19-related declines in consumer and industrial shipments. The small bright spot — a 3% increase in agricultural freight, was due to higher domestic grain and soybean shipments.

BNSF is expected to report another revenue decline in the second quarter and possibly beyond, according to a Bloomberg Intelligence report. But the railway has proven adept at cost-cutting in the past, the report said.

The company’s earnings dropped 22% in 2009 after the recession but increased 51% the following year. Since Berkshire acquired the railway in 2009, BNSF’s earnings have increased an average of 12% annually.

The drop in BNSF’s operations this year is indicative of the nationwide trend. The number of rail transportation employees nationally is expected to drop to 153,200 for May, down from 177,300 in the same month last year, according to the Bureau of Labor Statistics.

Omaha, Neb.-based Union Pacific said in January that it needed 3,000 fewer workers this year as it continues to follow the industry-wide trend to streamline operations. It had layoffs in May from virus-related volume declines, although it also didn’t specify the number.

Union Pacific’s first-quarter freight revenue declined 2.5% year-over-year to $4.9 billion. The rail operator is especially exposed to headwinds from COVID-related volume declines and the plummet in oil prices but its efforts to cut costs and streamline its business before the virus outbreak will help it weather the economic downturn, a Bloomberg Intelligence report said.

“We believe the increased focus on efficiency will allow it to quickly adjust resources in the event of a demand snapback,” the report said.

At Berkshire Hathaway’s annual meeting on May 2, Buffett said the firm’s three largest businesses were BNSF and its insurance and energy holdings. He told investors that he felt all three were in a “reasonably decent position,” but was particularly bullish on BNSF.

“That business is, in my view, is a very, very solid business for many, many, many decades to come,” he said at the meeting.

Industry analyst Tranausky said rail shipments of containers and trailers were expected to grow 1% to 3% this year. That’s been replaced with forecasts of double-digit declines.

Rail cars make up the bulk of freight business, transporting everything from petroleum and autos to chemicals and lumber. While 2020 already brought a headwind in coal demand, the industry expected carload traffic to stay flat. It’s now seen a significant downturn.

“It’s gone from stable to seeing steady declines but we expect it to stabilize in 2021,” Tranausky said.