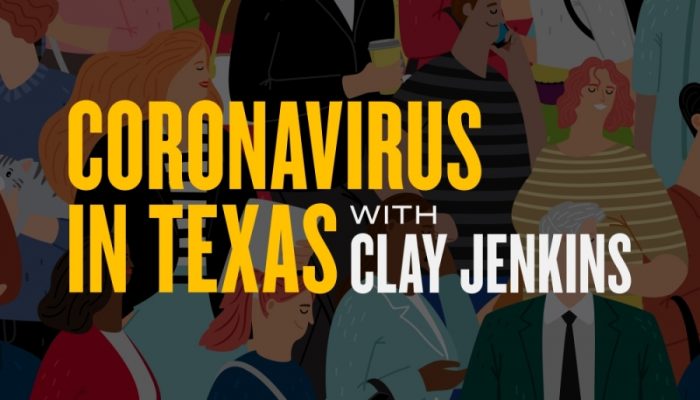 Texas Tribune political reporter Patrick Svitek sat down with Judge Clay Jenkins for a live discussion on the effects that the novel coronavirus is having on Dallas County, the nation’s eighth most populous county, and how his office has been handling the response.

Here’s a look at some of Jenkins’ responses to questions during the interview.

What’s the state of the outbreak in Dallas County?

Jenkins said the county on Tuesday would announce at least 10 new deaths and “a lot of new illnesses.
Jenkins said that based on recent academic models, the social distancing measures that his office issued in mid-March are bearing fruit, and “that’s giving us cause for optimism and hope.” But he said it was too early to tell whether the county would extend its stay-at-home order, which is set to expire April 30. Jenkins said he’ll make a decision as the date nears.
He went on to say that where Dallas County is now and where it could have been were it not for social distancing can be measured in the number of lives saved as well as the speed with which life can return to normal.

What is Dallas County’s ability to test and treat COVID-19 patients?

According to Jenkins, his office has developed a plan for UT Southwestern Medical Center and Parkland Memorial Hospital to administer a total of 6,600 COVID-19 tests per day. This testing would also have the added benefit of a one-day turnaround time for rendering test results. Jenkins said he’s confident that data drawn from testing across four of the most populous counties in the region can be used to help less populous counties get a better sense of their own potential trajectories.
In terms of what support the county needs from the federal government, Jenkins said that one of the key things is additional testing. “We’re like second to last in Texas right now in testing,” Jenkins said, which is one of the reasons his office has made a State of Texas Assistance Request. He said that to establish the level of testing capacity that Dallas County needs in order to reopen the local economy with confidence, the federal government will need to fulfill this request fully.
When asked about the fate of the pop-up hospital at the Kay Bailey Hutchison Convention Center — which Gov. Greg Abbott said in late March would have capacity for an additional 250 beds — Jenkins said that he has asked local hospital officials to give his office a better sense of whether such a facility will still be needed as the curve has begun to flatten.

How has Dallas County responded to the outbreak, and what is it doing to coordinate with other government officials?

When asked what informs and what has informed his decisions on putting social distancing measures in place, Jenkins said, “What informed the [initial] decision was science,” and that “the science will dictate,” whether the stay-at-home order for the county will need to be extended further.
In response to critics who have said that he has moved too unilaterally, Jenkins said that while he prefers to work collaboratively with other officials, “emergencies don’t necessarily lend themselves to a lot of discussion.” However, he also said that he’s begun working with county commissioners to make his overall decision-making process more collaborative and inclusive.
Jenkins also praised the work of Dallas Mayor Eric Johnson’s office and said that the offices are working closely on response initiatives including testing and compliance oversight for the social distancing measures.

How is Jenkins’ office responding to the needs of Dallas County residents?

Jenkins said that his office submitted a State of Texas Assistance Request in March on behalf of the North Texas Food Bank to address food security concerns — which have quickly become an issue for individuals and families across the state. Jenkins said that “70% of the people that are [currently] going to the North Texas Food Bank for food are new.” The food bank serves 13 counties in the region, meaning the recent surge in the number of families in need has left the food bank’s reserves depleted, Jenkins said.
In the absence of outside resources and supplies, such as federal funding and personal protective equipment, “we’ve basically just started creating our own,” Jenkins said. In response to the rise in food insecurity, Jenkins said that his office has initiated a “virtual food bank” — the NFTB Neighbors Helping Neighbors program — which is collecting donations and resources on behalf of the food bank.
Jenkins also said that his office is working with local distillers, textile workers and designers to create a local supply chain for personal protective equipment on behalf of health care workers and county residents.
In terms of relief for individuals who have been otherwise impacted by the economic downturn, Jenkins said that while the capacity of his office is limited, it has been working on local initiatives and strategic partnerships to offer services and individual protections — such as free check cashing at grocery stores, installment plans for property tax payments and a moratorium on evictions through May 18 — as well as online resources on the Dallas County website.

What will it look like to resume economic activity in Dallas County?

In response to reporting on Abbott’s forthcoming executive order to reopen the Texas economy, Jenkins said that even if the governor were to fully lift the statewide stay-at-home order before counties like his were ready — which he found to be unlikely — individual counties would be able to keep their orders in place as needed.
Jenkins also said that as long as Abbott is listening to scientific and public health experts as well as business leaders, he believes that their approaches will be aligned. “That’s what I want to see,” Jenkins went on to say, “an aligned response led by public health and business [expertise] to get the economy back … as soon as we can.”
“In all likelihood,” Jenkins said, “[we’re going to be] easing these restrictions [in a gradual and segmented manner],” with widespread testing serving as the benchmark for whether additional segments of the economy can be reopened. One reason Jenkins said that he favors a gradual approach is that he is concerned about a possible second major wave of coronavirus cases. “We want to act to get the economy moving again.” Jenkins said, “but not at the expense of having a second wave of cases,” which he believes would be devastating to both public health and consumer confidence.
Jenkins has served as Dallas County judge since 2011. Jenkins has also worked as an attorney and a small-business owner.

The interview was streamed on the Tribune’s website, Facebook page and Twitter, as well as by our media partners at KERA and KXAN, to a live audience of more than 9,000 viewers.