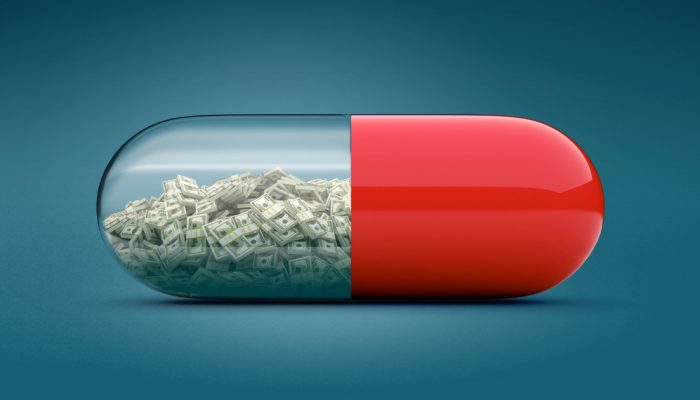 
For indispensable reporting on the coronavirus crisis and more, subscribe to Mother Jones’ newsletters.

In the flood of bad news about the coronavirus, this week there was a buoy: A major clinical trial showed that an antiviral medication called remdesivir shortened the length of time that patients are sick with COVID-19, from an average of 15 days down to 11. The FDA had already rushed to approve research on the compound—an underperforming Ebola drug—and the agency is expected to authorize it for emergency use within a week. There are caveats: It’s not clear whether the drug reduces a patient’s risk of dying from the disease, and a small Chinese study showed no benefit. Still, doctors are hopeful that remdesivir will help reduce strain on hospitals and buy time for researchers to develop other treatments and a vaccine. In the meantime, remdesivir’s manufacturer, the pharmaceutical company Gilead, could save millions of lives and make billions of dollars.

That’s how it’s supposed to work in the pharma world: Profit spurs innovation. But it doesn’t always happen that way. In fact, sometimes the opposite is true. Because of the perverse incentive structure of medical patents, Gilead has made billions of dollars by delaying development of its own HIV medication for the people who need it.

Gilead has insulated itself from criticism for years by sponsoring Pride celebrations and ritzy LGBTQ galas across the country.

In the late 1990s, Gilead made a breakthrough in HIV treatment when it found that the molecule tenofovir disoproxil fumarate, or TDF, could stop HIV from replicating. In 2005, Gilead’s TDF-based drug Truvada made $570 million in sales, and $2.7 billion in 2010. TDF’s side effects—decreased kidney function and bone mass—were milder than those of rival drugs, and seemed a small price for turning a death sentence into a chronic illness.

But as TDF made Gilead an industry titan, another molecule waited in the wings. In 2001, Gilead researchers found that tenofovir alafenamide, or TAF, was 10 times more effective than its cousin TDF, and likely had the same therapeutic effect at smaller, less-toxic doses. Yet months after submitting Truvada to the FDA, Gilead halted TAF research for six years, according to lawsuits filed by Truvada patients who suffered severe side effects from the drug. As TAF lay dormant, Gilead launched new treatments based on TDF that, from 2004 to 2014, made $60 billion in sales.

Why did Gilead sit on the more effective drug? In 2018, one Truvada patient sued Gilead, alleging that the company slow-walked TAF because it didn’t want to compete with itself. Pharmaceutical companies make their money through patents, which allow them to sell new products without competition and charge monopoly prices for a limited time. As Columbia University health economist Bhaven Sampat put it, “The goal is to avoid cannibalizing profits and lengthen the exclusivity term.”

Gilead had no financial reason to develop TAF in the early 2000s. It wouldn’t have increased sales—because TDF and TAF serve the same purpose in HIV cocktail therapies. They’re substitutes, like different gins in a martini. But it likely would have decreased future profits because Gilead’s patents for TDF and TAF would have expired just a couple of years apart. Instead, Gilead kept selling only its less effective drug until 2016, a year before the patent expired, giving them seven more years of monopoly profits. This past year, Gilead made $1.3 billion on drugs protected by patents that would have expired had they not waited.

Pharma companies can make billions by playing a waiting game—but that’s not the only trick they have. If a single chemical in a drug is patented, the whole drug has patent protection, so companies change a single chemical in their drugs and file for new patents. In 2012, Gilead began selling Truvada, one of its early TDF-based therapies, as HIV preexposure prophylaxis, or PrEP, which, taken daily, prevents HIV transmission. The drug worked wonders for those who had access to it; Gilead charges a sticker price of $20,000 a year, although many Truvada patients receive free or subsidized prescriptions. In 2019, Gilead got approval to sell Descovy, a form of PrEP chemically identical to Truvada except it swaps TDF for TAF. Though Truvada’s patent expires next year, Descovy’s patent may not expire until 2025 or later because Gilead has applied for extensions.

Before their products face generic competition, pharmaceutical companies also spend millions of dollars to make sure patients switch to their new, patented drugs. In the last months of 2019, Gilead spent tens of millions advertising TAF-based PrEP, and successfully switched nearly nearly 30 percent of all HIV patients from TDF-based PrEP to TAF-based PrEP. The company has created a prestige brand of drugs that many patients prefer over cheaper, similarly effective drugs. “A lot of the young black gay and bisexual men I see want a drug that’s not just identified with a high-risk population,” said Dr. Latesha Elopre, of the University of Alabama.

“We can treat these illnesses, but to do it we need to confront the monopoly power of the pharmaceutical industry.”

Yet consumer advocates say Gilead’s handling of its HIV drugs fits a pattern of pharma company behavior that they’ve fought hard to change. They argue that the government should use its influence over drug research and patent approval to lower drug prices, but their views are often drowned out by the pharmaceutical industry, which employs twice as many lobbyists as there are members of Congress, and has hundreds of millions of dollars to support academics, patients’ associations, and primary challengers. For example, Gilead has insulated itself from criticism for years by sponsoring Pride celebrations and ritzy LGBTQ galas across the country.

Peter Maybarduk, of the consumer advocacy group Public Citizen, worries that the warped incentives in pharmaceutical development may hamper pandemic response. “Pharma doesn’t have an incentive to invest in pandemics,” Maybarduk said. “Research is expensive and they don’t know what the next pandemic will be.” The main reason Gilead seems prepared with remdesivir is because they started developing the drug back during the Ebola crisis. Pharma companies, often risk averse and reactive, rely on the government to conduct the financially risky basic science research. If a chemical shows promise, the pharmaceutical company will develop it—often with government funding—into a drug there’s already a need for.

Maybarduk believes the government could use this funding and research as leverage for lower prices and more transparency. Aggressive negotiation was a pillar of HR3, the sweeping pharmaceutical reform bill passed by the House in 2019, but the bill will not receive a vote in the Republican-controlled Senate. Yet there are ways to drive prices down and spread pharmaceutical research that don’t take an act of Congress—just a more aggressive HHS department. The NIH could make reasonable prices a condition for funding private research. Another condition could be nonexclusive licensing, which would allow other companies to pay royalties and produce patented drugs. That could make it easier to scale up quickly during a pandemic. Maybarduk thinks the government should also consider buying out privately owned patents. “What’s the value of curing Hep C? Let’s pay something fair and produce as much as we need,” he said. “We can treat these illnesses, but to do it we need to confront the monopoly power of the pharmaceutical industry.”

About the Author: Kiera Butler