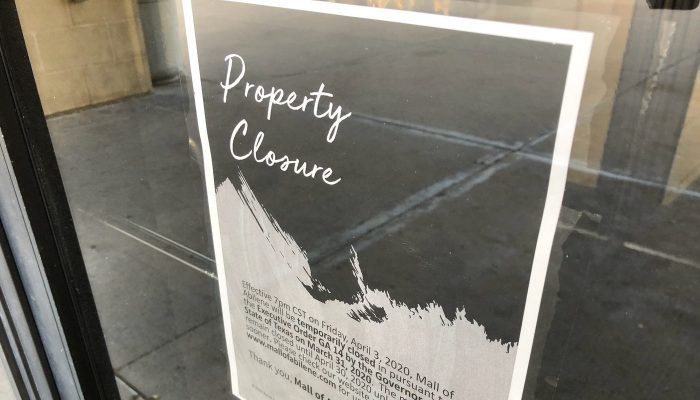 A letter signed by Mayor Anthony Williams and other West Texas mayors is asking Gov. Greg Abbott for the ability to open up communities with “strict physical distancing measures in place,” while recognizing that “Texas is a state whose needs and solutions vary by geographic region.”

The letter, sent earlier this week, comes as Williams is forming an advisory group of business leaders and health officials to start leading conversations about reopening the local economy.

Abbott is expected to provide an executive order Monday, April 27, allowing a broad spectrum of businesses to open in stages, a plan expected to vary by county.

The letter is signed by Williams and the mayors of Amarillo, Big Spring, Lubbock, Midland, Odessa and San Angelo.

“There is not much separation between the mindset of Midland and Abilene or Amarillo or Big Spring,” he said. “… We share numbers, concerns, strategies.”

Each member of the West Texas Mayors Coalition wants to open their cities, he said.

“But we want to do so under (plans) that make sense for us,” Williams said. “We don’t want to be caught up in the large communities of Bexar County or Travis County or Harris County. … We don’t think that is the best fit for our community. We want to have an opportunity to customize what makes sense for us.”

Even among the cities that make up the West Texas Mayors Coalition, “the way we open up things in Abilene may differ than the way they do it in Lubbock,” he said.

Once Abbott’s plan is known, the city’s attorney will offer interpretation of those parameters, and the advisory group should have its first meeting Wednesday.

There is also a broad category that includes museums, entertainment, childcare and churches.

The mixture, Williams said, is to help find the best way to open up Abilene in a responsible way, “designed to create some tension” to offer a variety of perspectives.

Though not a formal city board, the group’s meetings will be broadcast.

“I really want people to know what we’re trying to achieve,” Williams said.

Hurt said Friday that the planned teleconference should provide some rapid guidance for the way forward.

“Me personally, I’m for every thing the governor lets us do to open up,” he said. “I’m for opening completely back up. But that’s my opinion. And so, that’s the reason we have different stakeholders from the community. They need to share their thoughts. … Brad needs to reassure us on hospital capacity, things like that.”

Hurt said that he understands the decision to reopen businesses must be balanced with safety, and that the issue is “torn almost down the middle politically.”

“When does the cost outweigh the cure? We’ve all heard that,” he said. “… We can do this in stages, just like the governor said.”

Hurt said that those who have medical needs or other considerations have “the right to shelter in place, if they choose to.”

“If they’re susceptible, if they’re vulnerable, if they’re elderly, if they have underlying health symptoms, by all means get your support group, shelter in place,” he said. ” But let’s let the people that want to go back (do so).”

In a video released by Hendrick Health System this week, Holland said that “what we have learned through this pandemic is that Abilene is not New York.”

“We have learned that we had a little bit of heads-up, and we started social distancing and mitigating it at a very early time,” he said. “And that has been very successful for our community. We have definitely ‘flattened the curve,’ and that has been very beneficial to the health care providers here in Abilene and the Big Country.”

Holland said he is well aware there is “unrest” about the economy.

“As the CEO of a hospital, I, too, am supportive of opening up the economy,” he said. “But we have to do it in a smart way, in a way that we recognize the (COVID-19) curve here in Texas.”

Holland said Abilene is likely on the front end of the outbreak, and expects an “elongated curve.”

“We do know that COVID-19 is highly contagious,” Holland said. “And I do believe it will live with us for a while. We’ve identified that our peak or plateau … isn’t going to be until June.”

As the virus continues to spread across the population, “social mitigation” is still needed to help keep residents safe, he said.

“But we do and are preparing to live with COVID-19 for quite some time,” he said. “I encourage you to work with the city on what you can do to open your business and get back to work, but also continue to be cautious and mitigate where you can.”

Brian Bethel covers city and county government and general news for the Abilene Reporter-News. If you appreciate locally driven news, you can support local journalists with a digital subscription to ReporterNews.com.

About the Author: Brian Bethel