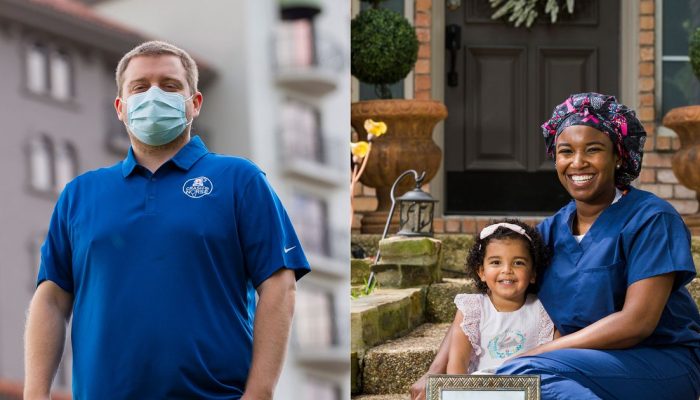 
Dallas lawyer Jim Mullen, back in North Texas after pulling 21 straight nursing shifts among some of the most critically ill coronavirus patients in New York City, is unconvinced that anyone would be interested in the solitary aftermath of his life-saving work.

For 10 days, he’s confined himself to a small Irving hotel room, catching up on legal work and sleep — and dreaming of the day later this month when, fingers crossed, he can reunite with his wife, Gina, an ER doctor fighting COVID-19 in Dallas, and their little daughter, Gracie.

“There’s not really much going on here,” he laughed. “The only thing more boring than being in quarantine might be reading about it.”

I don’t think so. Jim’s story — and his warnings — matter more than ever as North Texans increasingly become bored, lonely or discontent with sheltering in place: “Just because something is open doesn’t mean you have to go do it,” he told me. “You can say it’s not worth the risk to my health and my family’s health.”

After New York erupted into a coronavirus hot spot in March, Jim, an ER nurse for five years before beginning his law career in 2015, felt a calling to put his desperately needed medical skills to use. “More and more people were dying. … I felt I had an obligation to go do it,” he said.

Jim and Gina Mullen with their daughter, Gracie, on a recent family vacation. Jim shaved off his beard for his nursing stint in New York and Gracie, who talks with him daily via FaceTime during his self-quarantine, is delighted that his facial hair is growing back. “She just lights up my life, listening to her voice,” Jim says.(Family photo)

Gina knew Jim’s assignment would potentially put both of them in the path of the coronavirus, but she understood his feeling of being called to the mission.

Both Jim’s parents, as well as Gina’s, instilled a sense of service in their children at a young age. That’s one of the reasons she chose to work as operations section chief in the Dallas VA Hospital emergency department.

“I cannot underestimate how impactful and influential working with our amazing veterans, who are my colleagues and our patients, was in my decision to support Jim to go to New York,” she told me this weekend.

Jim told me over the weekend that it’s tough to reconcile the death and dying he witnessed in New York with the weekend’s news reports of North Texans celebrating leaving their homes.

“I genuinely hope and pray that Texas gets away with this decision to reopen,” he told me by phone, “but I worry that people are going to take advantage of opening up in the wrong way.”

He understands the economic devastation wrought by COVID-19, but he doesn’t buy into the argument that “the cure has been worse than the disease. There is nothing worse than being dead, and people die from this disease.”

Each evening for 21 straight days, Jim Mullen walked to catch a special bus that transported temporary medical staff to hospitals in New York. His time there was spent almost exclusively working 12-hour shifts, sleeping, catching up on law-related emails and talking with Gina and Gracie by phone.(Biz Herman / For The Washington Post)

Having seen first-hand how “we still know so little about this and in most cases we’re not going to really find out until it’s too late,” he worries about what the numbers, especially in Texas cities, will look like in two or three weeks.

Jim’s ER experience makes him no stranger to death, but even that did not completely prepare him for the many people his medical team was unable to save on the worst nights at his Queens, New York, hospital assignment.

His most searing memory — which illustrates how overcrowded the unit became — is of those patients he discovered dead in ER hallway beds. “It was just so overwhelming in there that whoever was assigned to the patient had so many other patients that they hadn’t yet gotten back around to them,” he said.

“To have that happen night in and night out and have it become almost part of your average shift, that will probably stick with me forever.”

After what he saw in New York, Jim finds it especially maddening to hear people spread inaccurate information, particularly when it comes to coronavirus-flu comparisons.

He’s worked some of the nation’s worst flu outbreaks, both in Atlanta and in Dallas, and the kill rate of the coronavirus is “night and day different. I watched more people in my first shift [in Queens] die of coronavirus than I’ve ever seen die from the flu.”

Jim Mullen said as he gets close to finishing his self-quarantine: “I’m knocking on wood as I say it, but it seems this has worked out really well. We’re all healthy and I’m close to being home.”(Juan Figueroa / Staff Photographer)

He understands federal patient privacy laws would never allow it, but he can’t help but wish people could actually see inside a hot-zone ER. “It’s so hard to understand it when you can’t see it. That would change how they protect themselves and their loved ones.”

Jim’s experience opened his own eyes to the country’s inability to respond to a global pandemic. New York’s COVID-19 crisis began to cool in Jim’s last week there, and he believes that even at the height of the chaos, the state’s medical system did the best it could. But the inability to get necessary resources was astonishing.

“You hear about the potential lack of ventilators,” Jim said. “But you don’t hear about the fact that we would run out of pump tubing or soft restraints or oxygen tanks.” At one point, he recalled his urgent request for a new portable oxygen tank was met with “we don’t have any more oxygen.”

“When you’ve got hallway beds stacked three deep and you literally have to move stretchers just to walk down the hallway, you need those oxygen tanks,” he said. “We have so much work to do to be prepared for a second wave of this.”

The personal protection equipment and well-researched hygiene strategies that Jim took with him to New York seem to have paid off; so far, he has shown no coronavirus symptoms. He and Gina will talk this week about what tests he’ll undergo before returning to their Irving home.

Fair warning to anyone who wants to call Jim a hero. Don’t do it.

He’ll point out that thousands of medical professionals from all over the country felt the same responsibility he did and, like him, were well-paid for their work.

Gina Mullen made time to make sure Gracie didn’t miss her Easter egg hunt in April, despite her own long ER work days and Jim’s stint in New York. Regarding Gina’s acceptance of Jim’s desire to work temporarily in a coronavirus hot spot, she said “I cannot underestimate how impactful and influential working with our amazing veterans, who are my colleagues and our patients, was in my decision to support Jim.”(Ashley Landis / Staff Photographer)

Jim says the real hero in this story is Gina, who in addition to her VA work is medical director for the emergency room at Baylor Scott & White Medical Center Uptown.

Having had the privilege to keep up with the Mullens’ story since Jim left for New York, I agree with Jim’s assessment. His may be the more dramatic medical adventure, but Gina has juggled an enormous load, even with in-home help for Gracie: Long days of medical and management work alongside being the 2-½-year-old’s only on-site parent for more than five weeks.

“What she’s been doing far exceeds anything I’ve done,” Jim said. “And making sure she’s staying as safe as is humanly possible when she’s coming home every day to Gracie.”

Gina agreed that the journey has not been easy — but it has been worth the difficulties. Even at the end of a long Sunday ER shift, she could joke a little: “I’m so excited to have Jim back, our routine back, but not so excited to give up the extra counter space I have had in the bathroom.”

Since Jim returned to North Texas April 25, the Mullens have seen each other only when Gina occasionally drops items off at the hotel. “You can see her 10 feet away, but you can’t go give her a hug,” Jim said.

For that reason, the couple decided it’s best not to tell Gracie just yet that her daddy is now just a few miles away. The toddler has a vague understanding that he’s in a faraway place caring for sick people, but she’s created her own accompanying narrative: After he shaved his beard in order to wear his N95 mask securely, Gracie decided he had gone off in search of his whiskers.

Now that Jim doesn’t have to shave daily, when the family is FaceTiming, “Gina will grab Gina and say, ‘Look, Mommy. Daddy’s beard is coming back.’ She just lights up my life, listening to her voice.”

In the moment of telling me that story, Jim lets his emotions show just a little. “Gracie is so, so happy. I’m grateful that she is young enough that she really didn’t understand what is really going on.”

While so many North Texas parents are going stir crazy with little ones underfoot, this father craves nothing more than that — sheltering in place with his wife and their child. “I’m knocking on wood as I say it,” he acknowledged, “but it seems this has worked out really well. We’re all healthy and I’m close to being home.