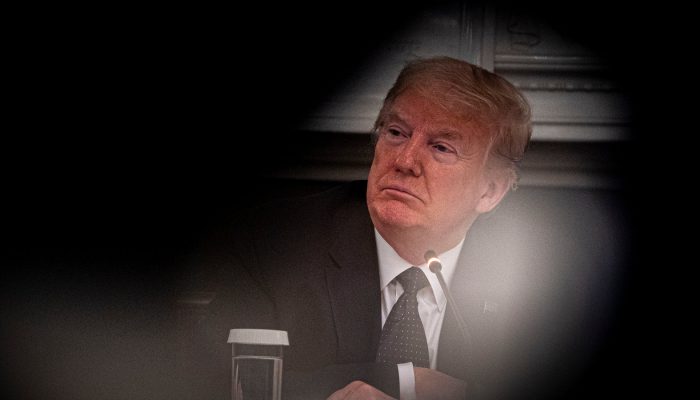 
President Trump revealed on Monday that he had been taking an anti-malaria drug as a preventive measure against the coronavirus, the same medicine that he has been promoting for two months with scant evidence of its efficacy and despite several warnings of dangerous side effects.

The drug, hydroxychloroquine, has been invoked by Mr. Trump repeatedly since March during White House briefings on the coronavirus pandemic despite the reservations of doctors and scientists, including some advising the president. He even called the drug, which has been promoted by some conservative pundits, a “game changer.”

Mr. Trump said he started taking the once-a-day pill about a week and a half ago. It was not immediately clear if Mr. Trump began the regimen in response to two White House staff members’ testing positive for the virus — one of the president’s personal valets and Katie Miller, the spokeswoman for Vice President Mike Pence.

And last week, a federal agency head who had been involved in developing a coronavirus vaccine testified to Congress that he had been removed from the post because he had pressed for a rigorous vetting of hydroxychloroquine. The official, Rick Bright, who led the Biomedical Advanced Research and Development Authority, also said he was pressured to direct money toward hydroxychloroquine.

Here is what we know about the drug:

Why has hydroxychloroquine been considered as a possible treatment for the coronavirus?

There are several reasons. A promising laboratory study, with cultured cells, found that chloroquine could block the coronavirus from invading cells, which it must do to replicate and cause illness. However, drugs that conquer viruses in test tubes or petri dishes do not always work in the human body, and studies of hydroxychloroquine have found that it failed to prevent or treat influenza and other viral illnesses.

Reports from doctors in China and France have said that hydroxychloroquine, sometimes combined with the antibiotic azithromycin, seemed to help patients. But those studies were small and did not use proper control groups — patients carefully selected to match those in the experimental group but who are not given the drug being tested. Research involving few patients and no controls cannot determine whether a drug works. And the French study has since been discredited: The scientific group that oversees the journal where it was published said the study did not meet its standards.

A study from China did include a control group and suggested that hydroxychloroquine might help patients with mild cases of Covid-19, the disease caused by the coronavirus. But that study had limitations: It was also small, with a total of 62 patients, and they were given various other drugs as well as hydroxychloroquine. The doctors evaluating the results knew which patients were being treated, and that information could have influenced their judgment. Even if the findings hold up, they will apply only to people who are mildly ill. And the researchers themselves said more studies were needed.

Another reason the drug has been considered for coronavirus patients is that it can rein in an overactive immune system, which is why it is used to treat lupus and rheumatoid arthritis. In some severe cases of Covid-19, the immune system seems to go into overdrive and cause inflammation that can damage the lungs and other organs. Doctors hope hydroxychloroquine might calm the condition, sometimes called a cytokine storm, but so far there is no proof that it has that effect.

Can hydroxychloroquine protect you from catching the virus?

There is no evidence that hydroxychloroquine can prevent coronavirus infection. However, researchers at the University of Minnesota and the Henry Ford Health System in Detroit are testing the drug in people who live with coronavirus patients to see whether it can protect them.

Is hydroxychloroquine approved by the Food and Drug Administration?

Yes, but for malaria, lupus and rheumatoid arthritis, not for Covid-19. For decades, doctors have been legally allowed to prescribe it for any condition they think it might help, a practice called off-label use.

In late March, the F.D.A. granted emergency approval to allow hospitals to use hydroxychloroquine from the national stockpile to treat patients who would not otherwise qualify for a clinical trial. Under the approval, patients and their families will receive information about the drug, and hospitals have to track information about the patients who received the drug, including their health condition and serious side effects. But that F.D.A. authorization for emergency use is not equivalent to meeting federal requirements, including scientific evidence through trials, that would deem hydroxychloroquine a proven treatment against the virus.

Is hydroxychloroquine being given to coronavirus patients now?

Yes. Early on in the epidemic, many hospitals began giving it to patients because there was no proven treatment, and they hoped it would help. Clinical trials with control groups have begun across the world. A nationwide trial began on April 2 in the United States; it had planned to enroll 510 patients at 44 medical centers.

Researchers say those studies are essential to find out whether the drug works against the coronavirus. If it does not, time and money can be redirected to other potential treatments.

Is there any danger in taking hydroxychloroquine?

Like every drug, it can have side effects. It is not safe for people who have abnormalities in their heart rhythms, eye problems involving the retina, or liver or kidney disease. Other possible side effects include nausea, diarrhea, mood changes and skin rashes.

The leaders of three professional societies in cardiology warned on April 8 in the journal Circulation that hydroxychloroquine and azithromycin could each cause dangerous disruptions in heart rhythm, and they wrote, “There are very limited data evaluating the safety of combination therapy.”

Over all, it is considered relatively safe for people who do not have underlying illnesses that the drug is known to worsen. But it is not known whether hydroxychloroquine is safe for severely ill Covid-19 patients, who may have organ damage from the virus.

If I can get hydroxychloroquine, should I take it to prevent coronavirus infection?

No, especially not without consulting a doctor who knows your medical history and what other medications you are taking. There is no proof that it works. And if it is being sold on the street or via the internet, it may be fake or unsafe.

An Arizona man in his 60s died in March after swallowing an aquarium cleaning product that had chloroquine on its label. He and his wife, who became critically ill, had thought the product would protect them from the virus.

At this point, the best way to avoid infection is to practice the social-distancing and quarantine measures recommended by public health authorities. The Centers for Disease Control and Prevention also recommends that people wear cloth masks in public and wash their hands regularly.