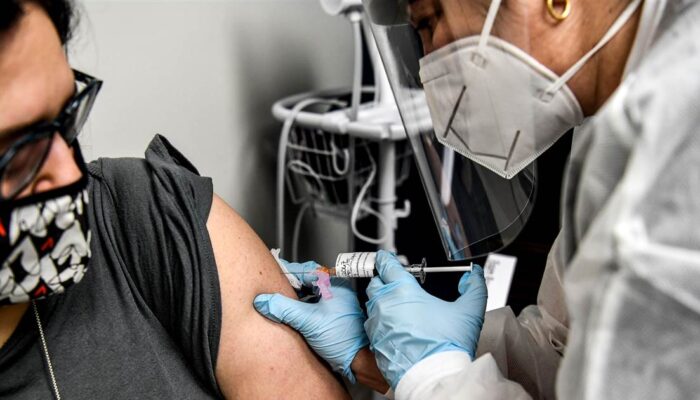 
Health officials and public health experts have offered conflicting answers in recent days about when the first Americans will finally get Covid-19 vaccine shots.

An advisory committee of the Food and Drug Administration will meet Dec. 10 to consider whether to grant emergency use authorization to Pfizer for its vaccine candidate. After the vote, the decision moves to the FDA itself.

A Centers for Disease Control and Prevention advisory group recommended Tuesday that health care workers and residents of long-term care facilities be first in line for the vaccines. The CDC is expected to accept the recommendation.

FDA scientists are reviewing data on two vaccine candidates, made by Pfizer and Moderna. There are expected to be enough doses to immunize 20 million people by the end of the month, Health and Human Services Secretary Alex Azar said Wednesday at a briefing for Operation Warp Speed, the government’s effort to fast-track a vaccine.

But even if the FDA’s group of independent vaccine experts votes to advise authorizing the Pfizer vaccine, it’s still unclear how soon after the Dec. 10 meeting the agency will make the final decision whether to authorize it for emergency use, a necessary step before any shots are administered.

The FDA isn’t required to follow the recommendations of its outside panel of experts, but it usually does.

An Operation Warp Speed document obtained by NBC News referred to a four-day window — Dec. 11-14 — for a possible emergency use authorization, with distribution of the vaccine beginning Dec. 15, although the dates may be subject to change.

Army Gen. Gustave Perna, Operation Warp Speed’s chief operating officer, said Wednesday on a call with reporters that the goal is to distribute vaccines within 24 hours after emergency use is authorized.

New York Gov. Andrew Cuomo said in a tweet that he expects the state to receive enough doses of the Pfizer vaccine to cover 170,000 people on Dec. 15 “if all safety & efficacy approvals are granted.”

New York’s first delivery of the Pfizer vaccine will be enough for 170,000 New Yorkers.

We expect, if all safety & efficacy approvals are granted, to receive these doses on December 15.

However, Dr. Peter Marks, director of the FDA’s Center for Biologics Evaluation and Research, said last month that the official signoff from the agency could happen days or weeks after the Dec. 10 meeting.

“Obviously we’re to be working to do it as quickly as we possibly can, and you have heard in the media that will be within a few days,” Marks said during a livestreamed talk with Vaccinate Your Family, an advocacy group. “It’s possible it could be within days. But our goal is to make sure it’s certainly within a few weeks.”

With hospitals nearing capacity across the country and fears of a “surge superimposed on the surge” of new cases, as Dr. Anthony Fauci warned Sunday on NBC News’ “Meet the Press,” the need for a vaccine is critical. The pressure for the FDA to accelerate the timing intensified Wednesday when the United Kingdom became the first country to approve the Pfizer and BioNTech Covid-19 vaccine.

But a member of the FDA advisory committee, Dr. Paul Offit, a vaccine researcher at Children’s Hospital of Philadelphia, said he doesn’t think the FDA should move up the meeting.

“You’re really talking about a week. You’re not talking about two months from now,” Offit said Wednesday in an interview with the JAMA Network. “I don’t see it as a huge difference.”

In an email, Offit said it’s “hard to know” when Americans would finally get the shots. “But best guess would be by the end of December, beginning of January,” he said.

A former director of the FDA’s Office of Vaccine Research and Review, Norman Baylor, president and CEO of Biologics Consulting, agreed.

It “is difficult to answer with all of the unknowns in front of us,” Baylor wrote in an email. “If everything is perfect and there are no insurmountable concerns,” it’s possible the first shots could be in people’s arms “by year’s end,” he said.

Akshay Syal is a medical fellow with the NBC News Health and Medical Unit.