Home Austin Covid News When will COVID-19 deaths peak in Texas? This model from UT has a prediction — but reopening could change that 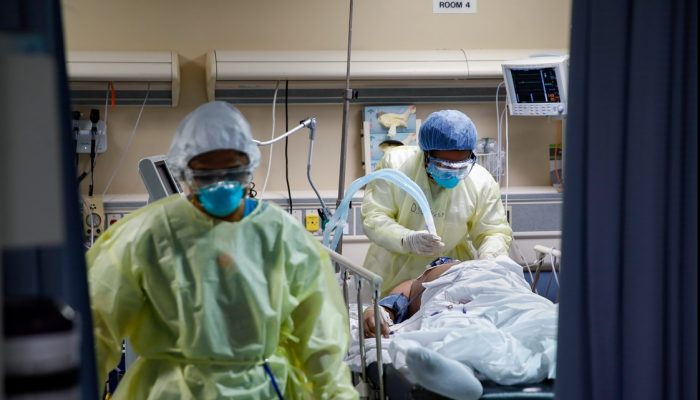 This model shows how well Texans have practiced social distancing and what effect their behavior is expected to have on the state’s death rate from the coronavirus.

The peak of COVID-19 deaths in Texas may have already passed, a new model from the University of Texas shows.

But if it hasn’t, it likely will within the next seven days.

That projection is driven by aggregate data from Texans’ cell phones that look at the frequency of peoples’ visits to places such as restaurants, grocery stores, bars, parks and schools.

Researchers saw visits to most of those establishments decline substantially in mid- to late-March across the country, said James Scott, a professor of statistics and data science at the University of Texas at Austin. Scott is a part of the team that’s working on the model.

That change in behavior then is just starting to show up now in the most recent death tolls.

“There’s something like, on average, a 23- to 24-day lag between when someone gets infected and when they’re at risk of death due to COVID-19 complications,” Scott said. “So what that implies is that today’s social distancing behavior is determining what the shape of that death rate curve is going to look like three to four weeks in the future.”

While health care systems in states such as New York and Louisiana have been grappling with a “catastrophic” amount of severe cases, Texas has not seen the same strain from the virus.

As luck would have it, Texas schools were going on spring break just as the virus first appeared in the state. The fact that many students ended up never going back to school may have prevented far worse outcomes in the state’s fight against COVID-19.

The timing of that large social distancing effort was “lucky,” Scott said, because the break effectively kept students fairly separate and apart right when it was needed, around the second week of March.

And about a week later, fewer and fewer people were going out to commercial establishments, aside from grocery stores, the researcher said.

“In-person commercial activity dropped off a cliff at that point,” Scott said.

These changes in behavior all came before Gov. Greg Abbott issued a statewide order on March 31 encouraging people to stay home, except for essential activities.

Local municipalities acted sooner than the governor, however, especially when it came to restricting businesses and other public spaces.

All these changes to behavior, forced or not, came “well in advance of when deaths really started to pick up” in Texas.

“We’re using a threshold date when a state reaches a per capita death rate of about one in every 3 million people, and Texas didn’t reach that really until the fourth week of March,” Scott said.

New York, on the other hand, reached that threshold before social distancing picked up.

The state recorded almost 800 coronavirus deaths a day before it reached its peak, according to the team’s research.

Compare that to Texas, where the highest number of deaths in one day so far has been 45.

“That simple fact of timing, of when social distancing behavior started in Texas versus in New York, has an enormous amount of explanation for why we’ve seen diverging paths in the epidemic in those two states,” Scott said. “It’s still bad in Texas, it’s killing lots and lots of people, but it’s not the catastrophe yet that we’ve seen in New York.”


What effect will reopening have?

“You can throw our model’s projections out the window if states start to reopen,” Scott said.

Social distancing has been effective in slowing the spread and severity of the virus. But as more and more states move to reopen businesses and loosen social distancing restrictions, including Texas, there are concerns that cases could surge once more.

“If people started behaving in the way that they were doing, say before March 8 in Texas — going to bars, going to restaurants, going to retail establishments, not following social distancing protocols as recommended by the CDC and other public health authorities — I mean, it seems pretty clear in light of what we’re seeing in the data that you can expect three to four weeks later a big spike in hospitalizations and deaths pretty much as surely as winter follows fall,” Scott said.

Texas began the reopening process this week, first with state parks, then with permitting elective medical procedures to resume. On Friday, retail businesses will be allowed to begin “to-go” service.

RELATED: What to know about Gov. Abbott’s orders to reopen Texas economy amid coronavirus pandemic

Abbott has also said he plans to announce further reopening steps across the state on Monday.

For a more detailed look at the team’s research and see the different state projections, click here.