Home TexasCovidNews Where will Texas aim if a top pitching prospect doesn’t fall to No. 14? 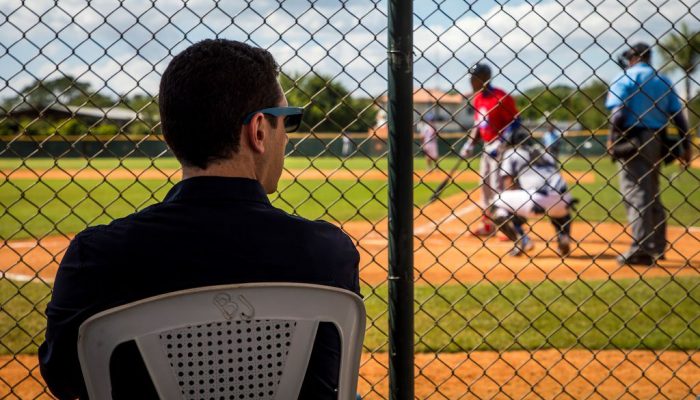 Surest sign of too much time on one’s hand: Doing a multi-round mock baseball draft.

But here we are.

In a normal year, trying to plot out an MLB team’s first-round draft pick alone would be hard enough. A full draft’s worth — 40 picks — would be insanity defined. But this is neither a normal draft nor a normal year. The draft, which begins Wednesday, is only five rounds. And with no actual baseball to write about, hey, we figured it would be “fun” to take a shot at the Rangers’ selections.

For this project, particularly after the first round, we didn’t rely as much on scouting reports or video from 2020. Hardly any exists from the COVID-19 shortened season. It increases emphasis on things like makeup and background. Familiarity plays a role.

Oklahoma right-hander Cade Cavalli has a tantalizing profile: He’s 6-4, 225 (a perfect pitcher’s body), has a clean delivery and a legit four-pitch mix topped by a fastball that can range up to 98 mph. Yet, he didn’t have overwhelming success. Why? Some control issues. But if he’s there, he offers the best combination of stuff and upside on the board.

The San Francisco Giants, who pick one spot ahead of the Rangers, have been tied pretty closely to him, which is reminiscent of 2006 when the Rangers wanted to take a freakish right-hander from Washington. The Giants, picking two spots ahead of Texas, however, grabbed Tim Lincecum. The Rangers got stuck with Kasey Kiker. The rest is history.

Even if Cavalli is on the board, the Rangers will weigh him against a group of college hitters, including catchers Patrick Bailey of North Carolina State and Dustin Dingler of Ohio State, first baseman Aaron Sabato of North Carolina and middle infielders Justin Foscue of Mississippi State and Nick Loftin of Baylor. All offer different assets. Sabato’s power might be the best single tool of the bunch; Loftin might have the highest floor; Dingler might be the most athletic.

If Cavalli is gone, the focus becomes highest floor among hitters, it comes to a discussion of Loftin’s floor as a viable utility guy vs. Foscue’s ceiling as a potential power-hitting second baseman.

Relievers aren’t usually high draft picks. Power lefty reliever Burl Carraway of Dallas Baptist might be the closest to ready player in this year’s draft. It’s conceivable he could go on a team’s 50- or 60-man talent pool for this season and help a team as a power lefty before the year is out, especially if rosters are expanded.

His mid-90s fastball might play even higher because of a high spin rate. His curve is advanced.

If Carraway is gone, consider the old standard: a Vanderbilt pitcher. In this case 6-4 lefty Blake Eder, who closed out the College World Series last year with a three-inning save.

The Rangers drafted high school right-hander Tai Tiedemann out of Long Beach, Calif., in 2016 and have been impressed with his growth and makeup. His younger brother, Ricky, is coming out of Lakewood (Calif.) High School. He touches 93 mph and there is room for more growth.

Will $700,000 buy him out of a San Diego State commitment? This is an opportunity for the Rangers to leverage his brother’s experience and Tiedemann’s own knowledge of the organization’s top-tier facilities to win a recruiting battle.

Michigan’s power hitting Jordan Nwogu features the athletic profile to which the Rangers are often drawn. He was recruited to several football schools as a potential edge rusher but went to Michigan as a recruited walk-on.

He crushes fastballs but has issues on breaking pitches and has an unorthodox swing that can turn scouts off. But he was Michigan’s top offensive player on a team that finished as the runner-up in the 2019 College World Series. He’s considered more of a hitter than a fielder, so there might be some issue about where on the field he could play. If he can hit, they will find a position for him.

In 2017, the Rangers took right-hander Ryan Dease from The Next Level Baseball Academy in Longwood, Fla., in the fourth round. His teammate, right-hander Jack Leftwich, opted to go to the University of Florida instead.

Leftwich is still raw but has a fastball that ranges to 96 mph and it might tick higher. He also isn’t afraid to pitch up in the zone, which is necessary in the current game.

Notable changes for 2020The draft has been shortened from 40 rounds to five, per agreement between MLB and the Players Association after the coronavirus pandemic shut down the sport and slashed revenues.While slot values and bonus pools remain flat from 2019 to 2020, draft picks will only receive a maximum of $100,000 this season. They will receive 50 percent of the remaining bonus in 2021 and the other 50 percent in 2022.Teams may sign an unlimited number of non-drafted players after the fifth round is complete. They are, however, limited to $20,000 in bonus money. Teams may also provide college scholarship money.Draft order, first round

Competitive Balance Round A

* Received in trade from St. Louis