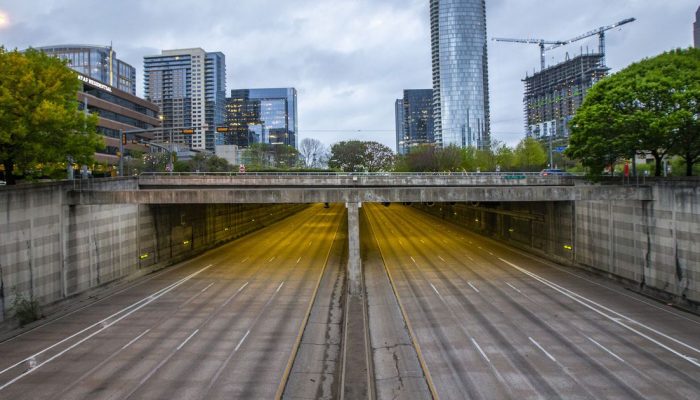 With North Texans ordered indoors to slow the spread of the new coronavirus, air quality in the area could be improving.

NASA satellite maps of nitrogen dioxide levels in Texas show lower levels from March 16 through April 10 across the state than the previous 26 days. Nitrogen dioxide is a pollutant that contributes to smog, according to the Environmental Protection Agency.

Multiple closures and shelter-in-place orders were implemented during the most recent 26-day span for which data was available. Bars, restaurants, night clubs, gyms, theaters and entertainment venues in Dallas were ordered closed March 16. On March 22, Dallas County residents, other than those engaged in essential business, were ordered to stay at home except for errands. And Gov. Greg Abbott issued a similar statewide order on March 31.

From April 8 through April 14 daily traffic congestion in Dallas-Fort Worth has been up to 50% lower at times, compared to full-year historical traffic data in 2019, according to TomTom, which produces navigation devices.

How’s air quality in Texas? See for yourself.

The first image shows levels of nitrogen dioxide (which contributes to smog) in Texas from Feb. 18 – March 15. The second is from March 16 – April 10. Story soon @dallasnews pic.twitter.com/ClweCKyDol

The trend of improving air quality has not just been recorded in Texas but across the country and the world. The Los Angeles area, for example, reported some of its cleanest air quality since at least 1995, according to The Washington Post.

While the satellite imagery is a good indication of improving air quality, the Texas Commission on Environmental Quality cautioned it’s too early to draw conclusions.

“Generally, it is too soon for the TCEQ to observe significant changes with the environment because of the COVID-19 crisis,” said Andrew Keese, a TCEQ spokesman. “For something such as local air quality, a reduction in driving would be positive; however, there are other factors for ozone and particulate matter, such as the time of year and the weather, including wind patterns.”

The TCEQ is working on analyses that will compare the months of March and April from the years 2017 to 2020. The analyses will focus on five major metropolitan areas — Dallas Fort Worth, San Antonio, El Paso, the Beaumont-Port Arthur area, and the Houston-Galveston-Brazoria area.

In Houston, air quality in March improved by 15%, according to the Houston Chronicle. But like the TCEQ, Daniel Cohan, an environmental engineering professor at Rice University, suggested more data is needed.

“How much is emissions, and how much is weather? It’s hard to say,” Cohan told The Chronicle. “But it’s moving in the right direction. It’s certainly been a cleaner month for ozone.”

While having fewer vehicles on the roads could improve air quality, other things could be causing an increase in pollution. For example, the EPA announced in March that it would temporarily suspend the enforcement of certain environmental regulations.

Catherine Fraser, a clean air associate for the Environment Texas Research and Policy Center, said suspending that enforcement could put the health of Texans at the mercy of polluters.

“The whole framework of the Clean Air Act depends on monitoring and reporting, without which we have no idea what facilities are releasing into the air we breathe,” Fraser said in a written statement.

In an open letter to Texas residents, public advocates, and those subject to TCEQ regulations, TCEQ Chairman Jon Niermann said that the commission has not relaxed its limits on air emissions or discharges into water and that its investigators are still responding to complaints.

“We are still watching out for our fenceline communities,” Niermann wrote in the letter. “We are still holding polluters accountable. We are here to serve all Texans as we see our way through this deadly pandemic.”