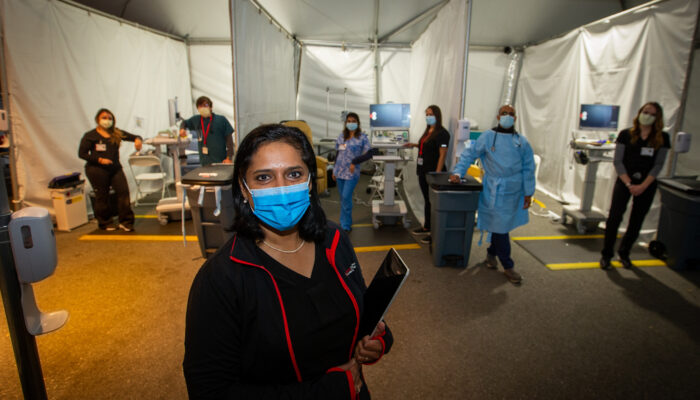 
When future historians recount the medical advances of the 21st century, a crowning achievement will surely be the swift development of COVID-19 vaccines to prevent the disease.

So why is it so hard to deliver drugs that can treat it?

Despite more than 14 million infections and 277,825 deaths, the United States has struggled to channel its expertise, energy, focus and resources into clinical trials for medicines that could reduce misery and save lives.

There is no cure yet for COVID-19. So far, the nation has produced only four new therapies that seem to ease the symptoms – remdesivir, dexamethasone and two types of monoclonal antibody treatments. For the vast majority of patients with mild or moderate disease, there’s not a single drug that is unequivocally effective enough for routine use, according to the Infectious Diseases Society of America.

It’s not because we’re not trying. With speed borne of desperation, about 700 potential drugs are being tested. Hundreds of trials are underway.

But it’s difficult to recruit patients; unlike healthy vaccine volunteers, infected people just want to stay home. And until recently, there has been little nationwide coordination of trials, wasting time, money and effort. Many studies have been too small to yield answers. Meanwhile, some drug candidates have been overhyped, while other promising agents are in limbo, delayed due to a backlog in federal reviews.

The result? Fewer than 10% of the nation’s COVID-19 patients have enrolled in high-quality clinical trials for treatments that would reveal what works and what doesn’t, according to health policy expert Dr. Vinay Prasad of UC San Francisco.

FILE – In this March 2020 photo provided by Gilead Sciences, rubber stoppers are placed onto filled vials of the investigational drug remdesivir at a Gilead manufacturing site in the United States. Given through an IV, the medication is designed to interfere with an enzyme that reproduces viral genetic material. (Gilead Sciences via AP) Gilead Sciences via AP

To be sure, the struggle to find a breakthrough drug is not unique to this disease. Only one of every 10 potential therapies eventually wins FDA approval. The failure rate is even higher for drugs targeting complex and poorly understood conditions like COVID-19.

Anti-viral therapies are especially hard to find, according to Stanford infectious disease epidemiologist Dr. Yvonne Maldonado. Because viruses reside in human cells, there’s the risk that any agent that kills the virus might also harm the cell, she said.

And COVID-19 has a second deadly phase: immune overreaction. But a drug that suppresses the immune response may do more harm than good, impairing the body’s ability to control the virus.

While research is moving far faster than in the past, “we’d like it to go even faster,” she said. “We have lots of great ideas and lots of great science.”

What are the problems in finding treatments? Interviews with experts revealed these shortcomings:

The nation’s clinical trial apparatus was slow to get started.

In the first month or two, as cases surged, doctors were focused on patient care. “We were just trying to keep the hospital functioning. … It was difficult to think about getting clinical trials going,” critical care expert Dr. Neil Schluger of Columbia University Medical Center told the journal Science.

Only at end of July did the National Institutes of Health begin enrolling patients in large-scale clinical trials for COVID-19 treatments. Without a unified health care system, coordination was more challenging.

In contrast, in mid-March the United Kingdom quickly launched a large and simple study trial in 176 hospitals, backed by the centralized National Health Service. Results came quickly, and clinicians didn’t have to make snap decisions about uncertain treatments.

While vaccines are being developed in a methodical way, efforts to find drugs have been haphazard. The nation’s Operation Warp Speed vaccine plan fundamentally restructured the way the government supports vaccine development and distribution. It worked to remove technical, logistical and financial hurdles — even paying for facilities, staff and supplies. Trials were quickly green-lighted. And regulators were explicit about what was needed for approval.

In contrast, the early trials for drugs “weren’t done in a very systematic manner,”  said Stanford’s Subramanian. “When the pandemic was starting, people were just grabbing for things.”

The initial research agenda was partly driven by hype and anecdote, according to an analysis in the British Medical Journal. For example, a large number of studies were launched to evaluate the antimalarial drug hydroxychloroquine after the publication of a controversial uncontrolled study. Even after these studies showed no benefit, President Trump urged its approval and use.

Fewer than one-third of studies evaluating COVID-19 therapeutics on the government’s ClinicalTrials.gov site are randomized controlled trials, which are the gold standard for evaluating treatments, the analysis found.

Unlike their British peers, American researchers work with a health care system that is fragmented. There was no unified message from leaders and no coordinated national strategy, so scientists flooded the system with proposals for potential drugs. The result: Many of the U.S. studies were too small to yield definitive results.

“I think the lack of a strong, central, coordinated effort in the United States is something we’ll have to grapple with coming out of this,” said Schluger.

With so many proposed therapies, the NIH and medical centers face tough choices about how to pay for and prioritize potential trials. And that has created delays.

In one example, researchers sought NIH funding in October, buoyed by evidence that the drug fluvoxamine seems to prevent serious breathing problems in people with mild COVID-19 illness. The response: Their application will be reviewed in mid-February.

Another promising trial, run by esteemed Johns Hopkins scientist Bert Vogelstein, seeks to test a treatment that targets the illness’s overactive immune response. It’s only received $1 million of its $5 million goal — and that’s all private donations.

“If you want a recipe for how not to handle a pandemic, the U.S. is the model for how inefficient things could be,” said Los Altos Hills tech entrepreneur and medical philanthropist Steve Kirsch, who’s helping bankroll these trials through the Early Treatment Fund.

Because people typically get tested on their own, they’re unaware of clinical trials — and clinical trial organizers have no easy way to reach them.

In trials, time is of the essence, because newly infected people must be promptly enrolled. But there’s often a delay between testing and results. And there’s also a lag time between infection and illness.

“Most people who are infected but asymptomatic ask: ‘Why should I be in a trial?’” said Stanford’s Maldonado. “The problem is, by the time they start to feel sick, it’s past time to enroll in a trial.”

Even asymptomatic people can spread the virus — so it’s important to find drugs that reduce infectiousness.

Finally, willing volunteers must meet rigid criteria, so the findings are trustworthy. That weeds out most people. Of the 1,337 patients who were screened to participate in the recent fluvoxamine trial, 64% had to be excluded because they were on other medications, lacked symptoms, or failed to meet other study standards. Another 24% opted out. The drug was eventually tested in only 14% of patients.

“I might have to call 40 people to find three or four who are eager to be in a study,” said Maldonado. “Unless they are in the hospital on a ventilator, most people don’t want to be in a clinical trial.”

That’s because trials can be demanding. While some just involve a one-time infusion, others require daily treatments. Most studies require about five visits to a hospital, but some need up to 10 or 12 visits. And it’s not just a case of getting a treatment; other things, such as daily nasal swabs, blood work and oxygen checks may be required.

“It feels like a hassle. … They just want to stay home and isolate,” she said. If they’re not seriously ill, “they feel like they’ll get better over time, so they don’t want to get involved,” she said. If they’re really sick, she added, they want the drug and not the inactive placebo, needed to compare results and prove efficacy.

And COVID-19 isn’t like cancer or heart disease — it’s infectious. So finding transit to a trial site is often a problem, say scientists. Some of the hardest-hit groups of patients, such as essential workers, don’t own cars.

“You can’t just call an Uber. You can’t just get on a bus. For people who could get a ride from relatives, why would you expose them?” said Subramanian.

To help, Stanford has tried to arrange transportation, or send home health aides to people’s homes. While “remote trials” are feasible – FedExing supplies to patients — the FDA demands detailed and accurate data.

Nearly a year into the crisis, the U.S. is finally improving its approach to drug research, with well-run trials beginning to generate more reliable answers, say experts. Hospitals like Stanford are finding creative ways to recruit and retain patients, such as erecting safe and very large outdoor tents that simplify volunteering.

This represents the victory of science over guesswork, of hard data over hunches.

“Without clinical trials, we wouldn’t have new medications. We wouldn’t know which medicines work at what stage of the illness, for which people,” said Subramanian.

“Trials have a very, very, very important role to play in all diseases,” she said, “but especially in COVID, where we need treatments fast.”

About the Author: lkrieger@bayareanewsgroup.com