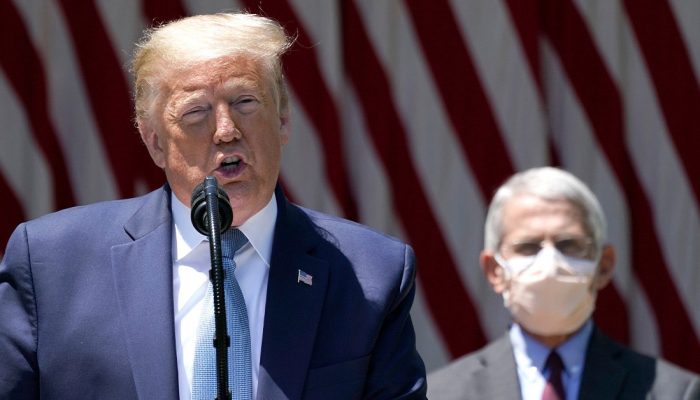 
Share on PinterestExperts say hydroxychloroquine hasn’t been proven to help treat COVID-19. Getty ImagesPresident Trump reports that he’s taking hydroxychloroquine daily, even though there’s still little clinical evidence to show that it works.The Food and Drug Administration (FDA) has also questioned its effectiveness and warned of potentially fatal side effects, such as irregular heart rhythms.Hydroxychloroquine and chloroquine are both approved by the FDA to treat or prevent malaria and certain autoimmune conditions, such as lupus and rheumatoid arthritis — but they’re not approved to treat COVID-19.

On Monday, President Donald Trump claimed that he’s taking daily doses of hydroxychloroquine, a drug that he’s long promoted as a potential treatment for COVID-19.

So far, though, no clinical trials have shown that this drug, or the related chloroquine, work against COVID-19.

The Food and Drug Administration (FDA) has also questioned its effectiveness and warned of potentially fatal side effects, such as irregular heart rhythms.

Trump told reporters that he has been taking hydroxychloroquine daily, along with a zinc supplement “for about a week and a half now.”

He added that he had requested the drug from White House physician Dr. Sean Conley.

In a press release, Conley said that after reviewing the evidence for the use of hydroxychloroquine, “we concluded the potential benefit from treatment outweighed the relative risks.”

Hydroxychloroquine and chloroquine are both approved by the FDA to treat or prevent malaria and certain autoimmune conditions, such as lupus and rheumatoid arthritis.

They haven’t been approved as a COVID-19 treatment.

However, the FDA issued an emergency use authorization in March for these drugs. This allows physicians to administer them to people with severe COVID-19.

However, he says some physicians believe that the drug may “prevent the development of symptomatic COVID-19 following exposure, as well as [offer benefit to] patients once they do become symptomatic.”

The White House memo from Conley alluded to Trump’s personal valet testing positive 2 weeks ago for the new coronavirus. This may be why Trump started taking hydroxychloroquine.

But Bailey says this kind of prophylactic use of a medication is best done for a brief period, while the exposure risk is still present. Ongoing use can lead to problems.

“Its use over an extended, open-ended time period is not ideal, and should not be used as a substitute for other measures to prevent infection,” Bailey said.

These measures include physical distancing, handwashing, and, if it’s ever available, a vaccine.

Trump, though, has been an early supporter of hydroxychloroquine, tweeting about it in March.

But some of his medical advisers, including the director of the National Institute of Allergy and Infectious Diseases, Dr. Anthony Fauci, cautioned early on against recommending the drug without clinical studies to back it up.

A lot of the “evidence” for hydroxychloroquine and chloroquine has been anecdotal, or from laboratory testing or small clinical studies.

However, more recent studies suggest that the drugs may not be beneficial for COVID-19.

Two observational studies showed that the drugs didn’t reduce the need for a ventilator or the risk of dying. One study was published in the Journal of the American Medical Association and the other study in the New England Journal of Medicine.

Several clinical trials of hydroxychloroquine and chloroquine are underway, which should provide us with a better idea of whether the drugs work.

In spite of these drugs’ long history of relatively safe use for malaria and autoimmune conditions, they’re not without risk.

Last month, the FDA warned people not to use these medications outside a hospital setting or clinical trial for COVID-19 treatment.

The agency reports that hydroxychloroquine and chloroquine, when taken alone or with the antibiotic azithromycin, have caused “serious heart-related adverse events and death in patients with COVID-19.”

The Associated Press reports that Trump took hydroxychloroquine with an “original dose” of the antibiotic azithromycin.

Dr. Matthew G. Heinz, a hospitalist and internist at Tucson Medical Center in Arizona, says that some people who are at greater risk from COVID-19 — people with high blood pressure and underlying heart disease — are potentially more susceptible to severe side effects from hydroxychloroquine.

A physical examination in 2018 showed that Trump has a common form of heart disease.

The drugs can also cause a wide range of neurological effects, such as agitation, hallucinations, paranoia, and psychosis.

When asked about potential side effects, Trump responded, “All I can tell you is, so far I seem to be OK.”

But Trump’s response to this medication doesn’t mean other people will fare as well.

“As with any medicine, side effects don’t occur in every single patient,” Heinz said. “In some, side effects could be very mild. But other people could end up in the ICU.”

Bailey says that Trump’s lack of adverse effects over a few weeks also doesn’t mean that he won’t develop problems later on.

“But with regular monitoring for known side effects, any risks from extended use can be mitigated,” he said.

Experts are worried that Trump’s use — and continued promotion — of hydroxychloroquine may lead people to think that it’s safe and effective.

“Words have meaning coming from the president of the United States,” Heinz said. “My concern is that some people will take this dangerous medication — which has real and potentially very serious side effects — without medical supervision.”

He points to the example of a couple in Arizona who ingested a form of chloroquine commonly used to clean aquariums. The man died of cardiac arrest. The woman was admitted to the ICU.

There have also been ripple effects on the availability of these drugs.

Since Trump began promoting hydroxychloroquine as a COVID-19 treatment 2 months ago, some people with autoimmune conditions have had trouble obtaining their medications.

“This kind of encouragement [by Trump] can lead to drug shortages, which causes problems for people who really do rely on this medication for legitimate on-label use,” Heinz said.

About the Author: Healthline