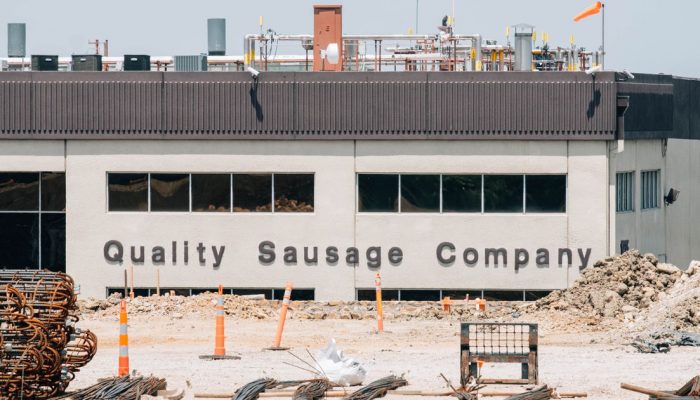 
The wife of a West Dallas meat processing plant worker who died has sued his employer, claiming its negligence led to a coronavirus outbreak inside the facility that killed Hugo Dominguez and sickened others.

Blanca Esther Parra said in her wrongful death lawsuit against Quality Sausage Co. that Dominguez was “the victim of a workplace which gave more importance to profits than human life.” The suit, made public Tuesday in Dallas County district court, claims Quality Sausage refused to take the pandemic seriously and took no safety precautions, even as workers became sick.

“As his symptoms became evident, he was told to report to work and to keep at it, otherwise he would have been laid off,” the lawsuit said. “A man with strong work ethic and deep commitment to his children and family, he continued to work till the day he just couldn’t go on, and a few days later he was gone; pronounced dead at Parkland.”

Dominguez’s brother, Pablo, is also listed as a plaintiff in the lawsuit.

Quality Sausage said in a statement issued last week that it “temporarily paused operations” to assess its response to the public health crisis and to test all of its employees. A representative said Tuesday that the “pause” remains in effect.

Blanca Parra, the wife of Hugo Dominguez, spoke about his death from COVID-19 at a news conference April 28 at the Quality Sausage Co. in Dallas. Parra has sued the company for wrongful death, alleging that it encouraged workers, including Dominguez, to keep working throughout the pandemic.(Lynda M. Gonzalez / Staff Photographer)

A different Dallas food processing plant nearby, Taylor Farms, also has been hit with coronavirus infections. The California-based company, which makes salads and other foods, said it’s taking the situation seriously and told its workers who had contact with the sick employees to self-quarantine.

“We have several employees who have tested positive for COVID-19 and those individuals are currently in self quarantine or under medical care,” a Taylor Farms statement said about the Dallas location. “We educated all employees on the importance of vigilance, working in smaller groups, social separation and personal and job site sanitation.”

Taylor Farms also said in the statement that it is continuously cleaning common areas, taking employee temperatures before they enter and requiring masks. The Dallas plant is in the 1000 block of North Cockrell Hill Road.

Workers at two other Taylor Farms facilities have also tested positive for COVID-19, including about 100 workers at a Rhode Island plant, according to news reports.

In total, about 5,000 meat processing workers across the U.S. have been infected with COVID-19, and at least 20 have died from the disease, according to data from the Centers for Disease Control and Prevention. Those businesses have been among the hardest hit by the pandemic, resulting in temporary closures and infected workers, which industry leaders have said threatens to cripple the U.S. meat supply.

“With workers crammed in side-by-side on processing lines, it’s no surprise that meatpacking plants have become incubators for COVID-19,” said Suzanne Adely, co-director of the Food Chain Workers Alliance, in a statement. “We’re in an unprecedented situation and right now we need OSHA to enforce mandatory protections like paid sick days, hand-washing stations, slower line speeds, and 6 feet of space between workers.”

The lawsuit against Quality Sausage, filed by attorney Shayan Elahi, says it had become “very clear” by April 8 that factory employees were sick.

When Dominguez became ill, he decided to move out and stay elsewhere to protect Parra and their children, the lawsuit says.

Quality Sausage “refused to take the pandemic seriously, and kept its functions as normal, taking no precautions and implementing no protocols for the safety of its workers,” the lawsuit said.

“His death was followed by the death of another worker, and then finally the factory decided to shut down to ‘re-evaluate’ its delayed response,” the lawsuit said.

Parra claims that Dominguez was not provided with personal protective gear, and that Quality Sausage did not require its workers to stay 6 feet apart in accordance with CDC and Dallas County protocols.

“His death could have been prevented, had the company spent a small segment of its $100 million profits to protect its underpaid and overworked employees,” the lawsuit said.

A quality assurance employee spot checked boxes of lettuce upon the shipment’s arrival from Mexico at the Taylor Farms warehouse in Dallas in December 2007. Several of the plant’s workers have tested positive for COVID-19. (ERICH SCHLEGEL / 126397)

Quality Sausage has previously said in a statement that it “adapted” its procedures to “reflect updated health and safety guidance, including: extensive daily sanitation of the facility; restricting outside visitors; increasing access to hand-sanitizing stations; requiring office staff to work from home; improving distancing among employees; temperature monitoring of employees entering the facility; and testing of all employees.

Several other meat-processing plants across Texas also have seen coronavirus outbreaks, including one in Dallas run by Mexican prepared foods maker Don Miguel Foods. The plant recently closed for 14 days after an unspecified number of employees tested positive for COVID-19.

Don Miguel Foods said it reopened Monday “with a new awareness initiative for team members for their workplace and homeplace called KEEP COVID OUT!” The company said it completed a deep cleaning of the facility and implemented social distancing requirements.

“Don Miguel Foods will be moving forward with a reopening plan that exceeds CDC and OSHA guidelines, ensures team member safety and continues to reflect best practices in the food industry,” a company statement said.