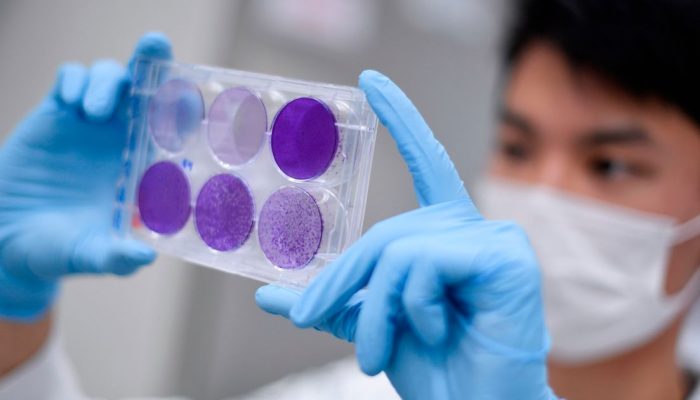 A researcher working on developing a vaccine in Brazil.
Photo: Douglas Magno/AFP/Getty Images

Hopes for a return to normal life after the coronavirus hinge on the development of a vaccine. But there’s no guarantee, experts say, that a fully effective COVID-19 vaccine is possible.

That may seem counterintuitive. So many brutal viral diseases have been conquered by vaccination — smallpox, polio, mumps, tetanus — that the technique seems all but infallible. But not all viral diseases are equally amenable to vaccination. “Some viruses are very easy to make a vaccine for, and some are very complicated,” says Adolfo García-Sastre, director of the Global Health and Emerging Pathogens Institute at the Icahn School of Medicine at Mount Sinai. “It depends on the specific characteristics of how the virus infects.”

Unfortunately, it seems that COVID-19 is on the difficult end of the scale.

A closely related virus of the same family, SARS, circulated in Asia from late 2002 to mid-2003 and killed more than 700 people. “They really are very similar viruses, both virulent and contagious,” says Rachel Roper, a professor of immunology at East Carolina University who took part in efforts to develop a SARS vaccine.

Given the similarities of the diseases, their response to vaccination would likely be close to identical. So it’s troubling that when researchers conducted animal testing on prospective SARS vaccines, they ran into difficulty. The two versions that they tested both successfully triggered the host animal’s immune system to produce antibodies, but neither was very effective at protecting against the illness. “People think, ‘Oh, if you make antibodies to it, it’s going to be protective,’” says Roper. “That’s not necessarily true. We were able to induce an immune response, but it wasn’t good enough to really protect against the disease.”

It’s possible, Roper fears, that COVID-19 could be a virus that proves resistant to vaccination. “This may be one,” she says. “If we have one, this is going to be it, I think.” The FDA has never approved a vaccine for humans that is effective against any member of the coronavirus family, which includes SARS, MERS, and several that cause the common cold.

Even if researchers do develop a COVID-19 vaccine that’s effective at protecting animals, that doesn’t necessarily mean it will do the same for people. “One of the things that they say in science is that ‘mice lie, and monkeys don’t tell the truth,’” Roper says. “You can get something that works in mice, you can get something that works in monkeys, and it still might not work in humans.” So any animal tests will have to be followed by trials to demonstrate that the vaccines are safe for people to use, followed by trials to see if they protect against infection.

In a worse-case scenario, a phenomenon called “immune enhancement” can cause vaccines to make the symptoms of infections worse. Instead of preventing the virus from entering healthy cells, the antibodies actually help them to do so. In 2016, after some 800,000 Filipino schoolchildren were given a dengue-fever vaccine called Dengvaxia, officials realized that some of them had been put at increased risk of life-threatening complications. Investigators wound up looking into the deaths of some 600 children who’d taken part.

Back during the SARS outbreak, researchers were unable to test their SARS vaccine candidates for effectiveness in humans. To do so, they would have had to inoculate a population that was exposed to SARS, and the disease was effectively wiped out using public-health measures before that could happen.

That won’t be a problem for COVID-19 vaccine testing, obviously. And given the scale of the efforts underway, it’s quite possible that one or more vaccines will be found that will overcome whatever problems hampered the SARS vaccines. Currently, more than 35 companies and academic institutions around the world are working on COVID-19 vaccines. The first human trials started last month for a vaccine produced by Boston-area biotech firm Moderna Therapeutics. Pennsylvania-based Inovio Pharmaceuticals started testing its candidate vaccine earlier this month, and Novavax, a Maryland company, has said it will start trials in Australia in May.

Should a fully effective vaccine prove unattainable, Roper points out that even an imperfect vaccine, or one that is only fully effective for a short time, would be better than nothing. “Partially effective vaccines can still prevent serious illness and death,” says Roper. “And even though it’s not perfect protection, it does protect from hospitalization and death. It gives your immune system the jump.”

At this point, it’s not a given that even an imperfect vaccine is a slam dunk. The way that the COVID-19 virus behaves out in the wild makes it hard to predict how it will respond to vaccination. In a sense, immunization is a way to let your body think it’s already had the disease by teaching its immune system to make antibodies against the pathogen. A recent study in China, however, found that many patients who actually had the disease showed very low levels of antibodies in their blood after they recovered — and in some cases had none at all. This might indicate that people who recover from the disease or get vaccinated against it might be able to catch it nonetheless. “We just don’t know yet,” Roper says.