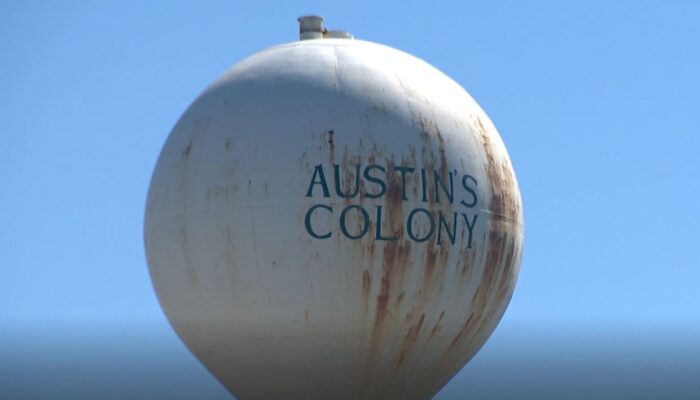 
The area is considered a food desert because of the lack of access to healthy food.

AUSTIN, Texas — Neighbors in one Travis County community said the winter storm made access to food even worse.

Those who live in Austin’s Colony – an area in the far east part of the county off Farm to Market Road 969 just past State Highway 130 – live in a food desert.

Especially when they don’t have easy access to food.

The closest grocery store, the H-E-B near U.S. 290 and U.S. 183, is between six to 10 miles away, depending on the neighborhood. Bedolla said some neighbors don’t drive and there’s no public transportation, forcing many to shop at two nearby convenience stores.

That’s why Bedolla helped organize a food truck to come to Austin’s Colony. She wanted her neighbors to have a hot meal after losing power, water and gas last week.

A handful of neighbors showed up and waited for the food truck for more than an hour. Bedolla was on the phone much of that time, trying to figure out the food truck’s location.

Bedolla said the food truck not showing up is typical. She compared it to the City and county response to her area after the winter storm: nonexistent.

“And so, I don’t understand where the disconnect lies. Is it because we’re Black and brown? Makes me wonder. Is it because systems have failed us? One hundred percent, yes. Is it because we have inept people in charge of our state? Hell yes,” Bedolla said. “Now I have seen beautiful things with some of our city council members. They’ve been doing good things. They’ve been busting their behinds to help. But the thing is, the little Band-Aid, they’re not holding things together. There’s a big divide and it’s about 12 miles that way. And I don’t know what to do. I’m one person and I have an ally over here. But what can we really do?”

After a few more calls, Bedolla announced another food truck was on its way.

As a member of Community Resilence Trust, or CRT, she is used to helping others. CRT is one of the groups helping the City of Austin and Travis County with distributing resources to those in need after the winter storms.

All this as Bedolla is recovering herself.

“So, we never lost electricity but the gas came down to a flame. I was cooking over a candle. That’s what it felt like. To give you an idea how I made over medium eggs: It took 25 minutes to cook an egg. That’s ridiculous, right? And then the gas dwindled down. We were without water for three days,” she said.

After a few calls, the second food truck arrived and served the long-awaited meals. A line quickly formed as people got their food.

“I’m glad we’re here, and we’ll serve all the people here for the next couple of hours, to the people that need the food,” he said.

The food truck partnered with an anonymous donor to serve the community. John Maverick also stopped by with clean water after hearing about the need in Austin’s Colony.

Bedolla and her neighbors are grateful for the grassroots efforts. But they want City and County leaders to step up.

Bedolla has been asking for a food drive in Austin’s Colony.

This past weekend, Austin Mayor Pro-Tem Natasha Harper Madison, along with Councilmembers Vanessa Fuentes, Pio Renteria and Greg Casar, addressed a letter to City Manager Spencer Cronk. They asked Cronk to start several mass food drives to address communities like Austin’s Colony because the need is so great.

Monday morning, KVUE got the following response from a City of Austin spokesperson:

“Like many communities, Austin is still navigating through the COVID-19 pandemic. Last week’s severe weather storm compounded the needs of those in our community who were already facing food insecurity. Austin/Travis County Emergency Management secured approximately 25,000 ready to heat meals from the Red Cross and, in partnership with local organizations, will be implementing a variety of strategies including establishing a mass food distribution site and continuing to offer delivery to home-bound individuals.

These efforts strive to fill the gaps of efforts already underway by existing food access providers. Forthcoming information about mass food distribution will be available on the Cold Weather and Information Resource page and on the City’s social media pages.

Austin relies on a network of organizations to provide food to our community, including grocery stores and non-profit groups. With improving weather conditions, the City of Austin and Travis County are working diligently to ensure that our critical partners in providing food can restart operations today, including the Central Texas Food Bank, Meals on Wheels, local Independent School Districts, and area grocers.