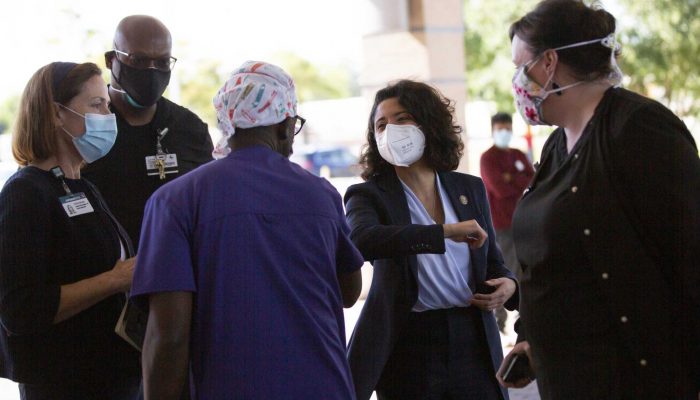 He blasted the rules as an abuse of Hidalgo’s authority. U.S. Rep. Dan Crenshaw, another Republican, said potential fines of up to $1,000 for violators would lead to government tyranny. The Harris County Republican Party and business coalitions decried the order.

Much like the widening national political divide over how government should manage the pandemic, criticism of the county’s response falls along familiar partisan lines. Hidalgo has sparred with Republicans — and sometimes other Democrats — over releasing inmates from the county jail, closing businesses and requiring masks in public.

The clashes often are proxy battles over Hidalgo’s vision for the county she has pushed since taking office last year, when Democrats took control of Commissioners Court for the first time in a generation.

“More or less, they’re the same fights, but magnified because of the political implications for where the state is going to go in the future,” said Brandon Rottinghaus, professor of political science at the University of Houston.

Patrick on Wednesday expanded his criticism of the 29-year-old county judge, deriding her support for expanded mail voting during the pandemic and a $17 million field hospital that turned out to be unneeded as either rookie mistakes or a partisan attempt to exploit the crisis.

“During these tough times, Texans need leaders who are ready for prime time,” Patrick said. “Clearly, Judge Hidalgo is not.”

“To have Judge Hidalgo take strong, decisive action in the face of this pandemic; some people are going to be upset,” O’Rourke said. “But for the vast majority of us — I’m not talking as a Democrat, but as a Texan — it’s really exciting to see that kind of leadership.”

Harris County, the state’s largest, leads Texas in coronavirus cases and deaths, but the area has avoided a severe outbreak like those in some other major cities.

Hidalgo touts the response as a model for the country. She has been reluctant to criticize other Texas officials during the pandemic, but has made clear she has grown tired of what she views as cynical attacks on the county’s coronavirus strategy.

“Some folks are trying to score political points on this,” Hidalgo said. “When I’m up for reelection, I will be happy to debate what decisions were made and why, anytime, anywhere, with anybody.”

Some Democrats attribute conservative attacks on Hidalgo to her being a young leader with potential who, as a self-proclaimed progressive and immigrant from Colombia, represents the changing face of the state.

“They believe — and they’re right — that she’s got a long and bright future in Texas,” said U.S. Rep. Joaquin Castro, a Democrat who represents San Antonio.

Hidalgo remains a confounding figure to many after 16 months in office. The role of county judge long has been obscure and far less powerful than, say, the mayor of Houston. Residents could be forgiven for ignoring the marathon Commissioners Court sessions Hidalgo leads. The judge’s most public role comes during disasters, when the executive commands the county’s massive emergency apparatus.

This is when public anxiety over Hidalgo peaks on social media. Some residents tune in to her coronavirus news conferences seeking reassurance from a figure like her predecessor, Ed Emmett, whose grandfatherly countenance and sober advice during hurricanes won him bipartisan acclaim. Instead they see a young woman who is not even halfway through her first term in elected office at the lectern. They worry she is in over her head.

Others are dismayed she repeats her announcements in Spanish. Online comments regularly refer to Hidalgo as Dora, as in Dora the Explorer, the 7-year-old Latina character of the eponymous cartoon series.

In her short tenure, the county has endured a tropical storm, massive chemical fire, several plant explosions, gasoline spill in the Houston Ship Channel and several localized floods. The emergency operations center has been activated for 11 disasters.

Hidalgo navigated those incidents without major missteps and worked with commissioners to make investments so the county was better prepared for future emergencies.

The arrival of a global pandemic here in late February, however, brought challenges wholly unlike a hurricane, requiring long-term restrictions on public life unlike any Houston leaders had enacted since the Spanish flu pandemic a century ago.

To Hidalgo, the pandemic exposes inequities in society that pushed her to run for office two years ago: too few people have adequate health care and transportation, too many languish in jail before trial.

Hidalgo’s victory over Emmett in 2018, even in a wave year for Democrats, stunned many voters. She never has approached the job with a just-happy-to-be-here attitude, though, and from the start outlined an ambitious agenda to expand the scope of county government.

Leading Commissioners Court, she has welcomed the support of the two Republicans. When they disagree, she has not hesitated to wield her 3-2 majority.

Hidalgo continues to bring a data-driven approach to policymaking. That reliance on quantitative analysis sometimes has led to clashes with other Democrats, such as when she repeatedly refused requests from District Attorney Kim Ogg for more prosecutors. Hidalgo insisted research showed investments in criminal justice were best made elsewhere.

If past is prologue, Hidalgo’s response to the pandemic should not come as a surprise. As Houston became the largest metropolitan area in the country without coronavirus restrictions, Hidalgo was quicker than Houston Mayor Sylvester Turner to embrace aggressive limits on movement and commerce.

Citing the recommendations of Texas Medical Center executives, she also secured unanimous support from commissioners for the temporary field hospital as a last resort. And after Sheriff Ed Gonzalez said he lacked the space to prevent a spike at the Harris County Jail, she ordered the release of hundreds of inmates accused of nonviolent offenses.

Residents largely accepted health experts’ arguments the stay-at-home order was necessary to blunt the outbreak here. After a month under the restrictions, however, some businesses pushed officials to reopen the economy May 1, warning many firms soon would go bankrupt. A Hedwig Village restaurant opened in defiance of the order, with the support of the small city’s mayor.

Hidalgo dismissed the move as a stunt and refused to commit to an arbitrary reopen date, heeding the advice of doctors who suggested restrictions were needed for several more weeks. The governor overruled local officials and opened many businesses Friday, a day after Texas reported its highest daily number of virus deaths.

Abbott acknowledged some counties are harder-hit than others, and left it to local officials to enforce the relaxed restrictions

Hidalgo said the county would ramp up testing and gird for a potential spike in cases. Though Abbott has spent several years attempting to strip local governments of their power, Hidalgo spoke highly of their relationship during the pandemic.

“If I see indications we’re going back to an untenable situation for our hospital system, I’ll be the first one to say, ‘hey governor, are you looking at this?’” she said. “I expect his answer would be ‘yeah, I see it, too.’”

Some of the critiques lobbed at Hidalgo focus on her youth, ethnicity and gender. She often asserts herself in these situations — whether a public speaker refers to her as a girl or, as Commissioner Steve Radack has called her, “young lady” — but otherwise moves on.

Most of the criticism is not identity-based, however. Many conservatives fundamentally disagree with her expansive view of government, willingness to raise taxes and dipping into the county’s historically high cash reserves.

The two Republican county commissioners, Radack and Jack Cagle, have accused Hidalgo of ignoring her promises of transparency, failing to seriously solicit their counsel and only seeking the advice of experts who are inclined to agree with her. Commissioner Rodney Ellis, formerly the only Democrat on the court, chalked his colleagues’ complaints up to unfamiliarity with serving in the minority.

The complaints extend to her handling of the pandemic. Houston City Councilman Greg Travis, who opposed closing the rodeo and the stay-at-home order, said Hidalgo did not properly consider the economic damage the restrictions would bring.

“It’s up to leaders to listen to experts in various fields and to try to chart a course that is best,” Travis said. “We put 350,000 people out of work.”

He cited Hidalgo’s mask order, which he said was foolish because police had little capacity to enforce it, as a misstep attributable to her inexperience. Travis said if masks were so important, Hidalgo should have required them a month earlier, along with closing down public transit.

Hidalgo said her intent never was to punish residents, and police said they would distribute masks rather than citations. Though sometimes reluctant to admit mistakes, the county judge said she wonders if pushing to close the rodeo sooner would have saved lives.

The reverse may also be true, she acknowledges. The models may turn out to be wrong, the costly restrictions unnecessary.

Hidalgo is well-aware that the economic recovery from the pandemic, which could last years, threatens her ambitious agenda. The public backlash could even cost her re-election in 2022.

“If this is the end of my time in government, I’m OK with that,” Hidalgo said. “I just want to make sure people don’t die.” 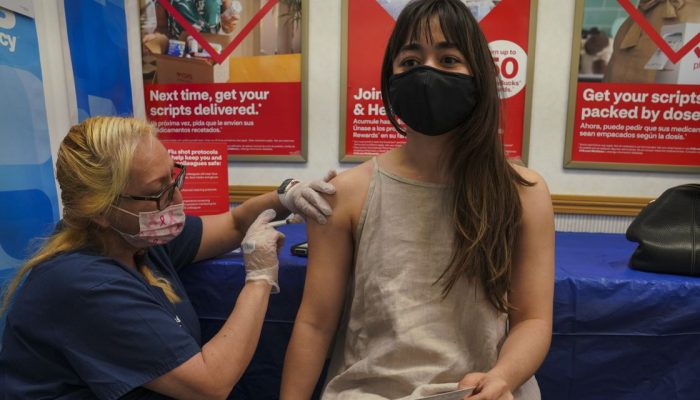 About the Author: Zach Despart