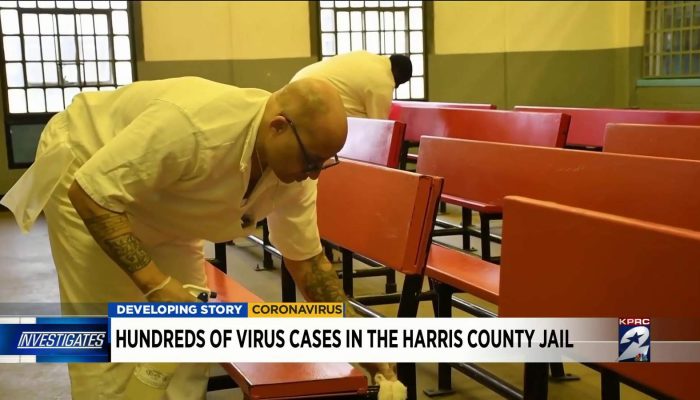 HOUSTON – The Harris County Jail is now one of the country’s COVID-19 hotspots, with hundreds of current cases involving inmates and employees.

As of Tuesday, April 27, there were 7,455 detainees in the jail, and 302 of them have tested positive for COVID-19. Another 2,720 inmates are in observational quarantine. In addition, 180 Harris County Sheriff’s Office employees who work at the jail have tested positive. There have been no deaths, and only one inmate has been hospitalized.

For comparison’s sake, we looked at a similar-sized facility, the Cook County Jail in Chicago, which is also dealing with hundreds of cases. As of April 27, 261 inmates and 150 employees were positive for COVID-19, and six inmates and one employee have died.

The Texas prison system has also been hit particularly hard, with more than 300 employees and more than 900 inmates who have tested positive for COVID-19. Four corrections officers and 10 inmates have died.

One person who knows exactly what’s going on inside the Harris County Jail is Sgt. Dustin Ballew with the Harris County Sheriff’s Office. A few weeks ago, he thought he was dealing with allergies, including a sore throat and congestion until a coworker at the jail noticed he was flush.

“When I got home, I checked my temperature and sure enough I was running a fever,” Ballew said.

He immediately went into quarantine and got tested for COVID-19.

“The fever, the chills, those were probably the worst part of it,” Ballew said.

Ballew counts himself lucky. He says his symptoms weren’t that bad and he was already feeling better when his test results came back positive.

“So it was kind of strange that I was feeling better, but now I have results,” he said.

Once his quarantine was over, he got right back to work in the jail. Before he went to the jail, Ballew was a patrol deputy for the Harris County Sheriff’s Office and said the mindset is no different when it comes to the dangers of the job.

“If you spend all your time on this job worrying about getting hurt on this job, then you may actually get hurt or you won’t get anything done,” he said.

Ballew says the inmates are more edgy than usual.

Ballew said Sheriff Ed Gonzalez recently moved jail staff to 12-hour shifts to help make up for staff members who were at home in quarantine and to provide more stable schedules. Ballew said inmates on the quarantine floors are tasked with helping disinfect their areas.

This helps make up for a staffing crunch and prevents other inmates from potentially being exposed to the virus, Ballew said. None of it is easy work, especially in a place where things like social distancing are not all that possible. He has high praise for his coworkers.

“It’s not an easy job, there’s a lot of scrutiny on everything they do and they’re trying to do the best they can,” said Ballew. “It’s been tough on them but we’re going to get through it.”

Gonzalez is trying to ramp up testing as quickly as possible. His goal is to test 3,000 inmates, because of the inmates who’ve already have tested positive, about one-third have no symptoms at all. So he needs the extra testing to find out how many inmates have this virus so they can be isolated.

About the Author: Robert Arnold