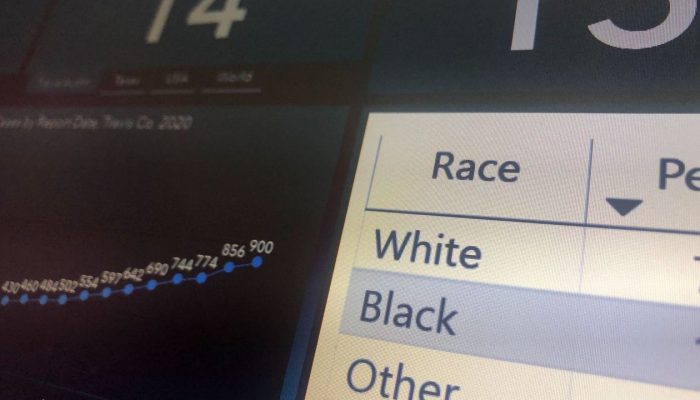 AUSTIN (KXAN) — As numbers from around the country continue to demonstrate the ways communities of color are disproportionately impacted by COVID-19, health experts, public officials and organizers in Austin are calling for more data on the ways the novel coronavirus is affecting people of different races and social conditions.

Data from Austin Public Health on the COVID-19 cases in Austin-Travis County on the evening of April 14, 2020. Data via the Travis County COVID-19 dashboard.

Disparities in focus across the country

Adams also noted that one in five African Americans and one in six Hispanics in the U.S. have a job that lets them work from home, making them less likely to telework. He also noted that people of color are more likely to live in dense areas and multigenerational housing, which could create a higher risk for the spread of disease.

Racial disparities in illnesses and deaths are already starting to play out in some locations. In Louisiana, for example, where 33% of the state’s population is Black, Black Louisiana residents made up 59.29% of the COVID-19 deaths in the state. Data from New York City last week indicates that Hispanic and Black people are dying of COVID-19 at disproportionately high rates.

“When disasters like coronavirus occur then, not only can we see that more people suffer more socially, but we see the impacts that it has on their health and sometimes on their ability to survive,” explained Dr. Jewell Mullen, the Associate Dean for Health Equity at UT Austin’s Dell Medical School.

Mullen studies how diseases impact communities and has an extensive public health background, from working as n equity consultant for Ascension Seton to working previously at the US Department of Health and Human Services as the principal deputy assistant secretary for health.

“One of the things that I’ve learned because I’ve worked in a number of states,” Mullen said, “is that when we talk about race and the racial groups that are disproportionately or unduly affected by a crisis, sometimes the statistics vary a little bit when we talk about who is most affected when we look at percentages.”

She explained that while now, we may be hearing reports across the country of disproportionate numbers of African Americans dying of COVID-19 in some communties, and disproportionate numbers of Hispanics dying in other communities, we may not be getting enough data about other populations that might be at risk, for example, Native American populations.

Rather than leaning on assumptions about what the data will tell health officials about COVID-19 cases in Austin, Mullen believes the Austin community needs to see more numbers to tell the story of how exactly COVID-19 is impacting its own communities.

To be clear, Mullen thinks the conversation about disparities in African American COVID-19 deaths in cities like Milwaukee and Chicago is important, she just believes Austin needs to drill down into its own COVID-19 numbers too.

Mullen offered what she called a must-do-at-this-very-moment item for Austin: “we need data!”

“We need numbers,” she continued. “We need information. We need the numbers that represent the people, the people who are our friends our neighbors our families and the neighbors we don’t even know, so that we really understand what’s happening in Austin in Texas and in the United States.”

That information doesn’t have to be attached to people’s names, Mullen said, but in addition to race, she added that it will be important to continue tallying gender, ethnicity, and the language that they speak.

“Because local numbers local data tell us what’s happening here, and they tell us what we need to be doing,” she said.

When Mullen says what “we need to be doing,” she is not just talking about Austin Public Health, who she says has included her in some COVID-19 conversations.

“We have a community that’s responsible to [APH], a community of testers, of care providers, to fill out the forms completely, to collect that information and give that to the health department, because they’re only going to be able to report what they receive,” Mullen said. “That’s my call to action.”

She said APH’s ability to collect this kind of thorough data will also depend on health care systems to expect that data as “a minimum standard of quality for the care that they provide.”

Demand from the community

Chas Moore, the executive director of Austin Justice Coalition explained that there are longstanding inequities and hurdles that may make it difficult to collect data from Austin’s communities of color. Moore cited a lack of healthcare clinics and testing resources in the Eastern Crescent of the city and a lack of access to fresh, healthy food in those neighborhoods as additional health barriers communities to face.

“That is only an effect of the years and decades and eons probably of lack of quality health resources here,” Moore said.

“We’ve seen that institutionalized racism or systemic racism, or even if people don’t want to call it that, the lack of resources for those communities that are going to directly impact and disproportionately impact my community and other minority communities,” he said.

While East Austin and parts of present-day downtown Austin are full of rich history for Austin’s African American community and Austin’s Hispanic community, these groups were pushed out of more central neighborhoods by segregationist policies in the 1920s.

Previous research from UT Austin has documented the displacement of the African American community from neighborhoods in the eastern crescent of the city. The researchers believe these neighborhoods are most vulnerable to gentrification now because they had historically lower housing costs as a result of 1928 policies that segregated Austinites of color to the eastern part of the city.

Now, that same eastern crescent of the city is in focus as a new report (which KXAN covered) from the University of Texas Health Science Center at Houston shows census tracts there have the highest prevalence of these risk factors for severe COVID-19 disease in the Austin area. The UT Health Science Center researchers pointed out that the areas with the highest COVID-19 risk factors and the areas with the greatest financial need often overlap.

Map and data from Mapping the Areas at Highest Risk of Severe COVID19 in Dallas, Austin and San Antonio study from UTHealth School of Public Health, Institute for Health Policy

“Your feedback and advocacy boost our outreach efforts to reach people and communities most susceptible to COVID-19 complications,” said Central Health CEO and president Mike Geeslin in a newsletter. “For Travis County, it’s communities of color, those living in poverty with a history of under-resourcing that are most susceptible.”

Chas Moore tells KXAN, “I’m glad that there’s now access to clinics to residents in the Eastern Crescent, I think it’s something crucial in this moment.”

Moore added,”I also hope there’s consideration to keep those clinics open post-pandemic to make sure those communities have access to health care needs in the future. “

Moore said he also appreciates the effort by Austin-Travis County officials to improve the data they have about different demographics when it comes to COVID-19.

“I think [the data collection] can get better, I think it will get better, I think people are curious –again, especially in those more vulnerable communities, I think they are anxious to know how bad the problem is,” Moore said. “I think once we get that data out, I think it will only make us stronger as a community it will only make us more knowledgeable about who this disease is targeting.”

Moore’s organization Austin Justice Coalition has been working with the Austin Area Urban League and MELJ Justice center to survey community members about what they need during the coronavirus pandemic. Among the responses they’ve seen so far, Moore said many in the Austin area have been saying that their inability to work has impacted their quality of life and that they need help with things like rent and finding mental healthcare. Anyone is welcome to take the survey, you can find the link here.

An Austin Public Health spokesperson explained to KXAN in an email that the departments “ultimate goal is health equity.” APH also has a “priority populations task force” for COVID-19 response, made up of city and county employees who do outreach to “populations experiencing disparate health outcomes that put them at greater risk for COVID 19.”