Home TexasCovidNews Woman, 96, dies from COVID-19 102 years after her older sister passed away from 1918 Spanish flu 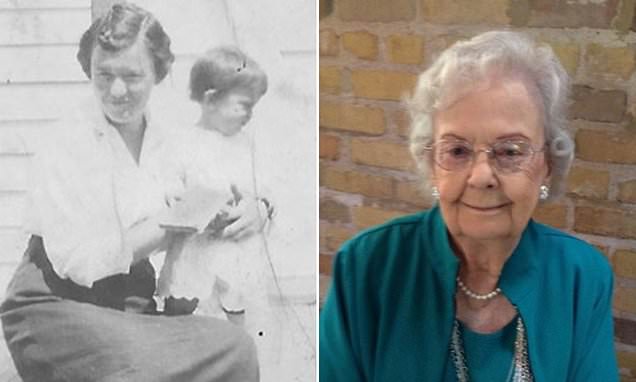 A Texas woman has died from COVID-19 exactly 102 years after her older sister passed away from the Spanish flu pandemic of 1918.

Selma Esther Ryan and Esther Hoeffner, were both born in Hurnville, Texas.

Ryan passed away on Tuesday at an assisted living facility in Austin after suffering from the coronavirus, which is deadliest to older people.

Her sister, Hoeffner, who she never got a chance to meet, died in 1918 from the influenza pandemic, also known as the Spanish flu, even though it didn’t originate in Spain.

Selma Esther Ryan (left), 96, of Texas, has died from COVID-19 exactly 102 years after her older sister, Esther Hoeffner (right, as a child) passed away at the age of five from the Spanish flu pandemic of 1918

According to Ryan’s daughter, Vicki, her mother started feeling feverish on April 3. Ryan’s (pictured) health continued to decline until her death last week

According to the Centers for Disease Control and Prevention (CDC), the 1918 pandemic infected 500 million people worldwide, and killed 50 million people.

Ryan, who had lived at the assisted living facility for the last three years, was born five years after her sister died from the Spanish flu.

Ryan’s daughter, Vicki, told WGN-TV that her mother and at least five other residents at the facility were experiencing high fevers on April 3.

‘Over the next five days I watched through the window as she got sicker and sicker. It was so hard to not be with her,’ Vicki said.

Vicki told the station that Ryan celebrated her 96th birthday on April 11.

‘Our family gathered outside her window, but it was obvious that something terrible had happened,’ Vicki said.

According to Vicki, Ryan was not tested for COVID-19 until after she died.

Last week it was revealed that more than 3,600 deaths in the US have been linked to coronavirus outbreaks in nursing homes and long-term care facilities.

But the true toll among the 1 million mostly frail and elderly people who live in such facilities is likely much higher, experts say, because most state counts don’t include those who died without ever being tested for COVID-19.

Outbreaks in just the past few weeks have included one at a nursing home in suburban Richmond, Virginia, that has killed 42 and infected more than 100.

Another outbreak occurred at a nursing home in central Indiana that has killed 24 and infected 16.

A third took place at a veterans home in Holyoke, Massachusetts, that has killed 38, infected 88 and prompted a federal investigation.

This comes weeks after an outbreak at a nursing home in the Seattle suburb of Kirkland that has so far claimed 43 lives.

Experts say nursing home deaths may keep climbing because of chronic staffing shortages that have been made worse by the coronavirus crisis, a shortage of protective supplies and a continued lack of available testing.

And the deaths have skyrocketed despite steps taken by the federal government in mid-March to bar visitors, cease all group activities, and require that every worker be screened for fever or respiratory symptoms at every shift.