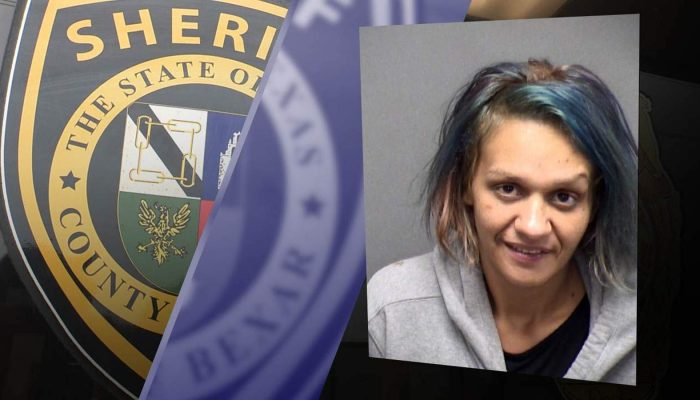 SAN ANTONIO – A woman who was let out of the Bexar County Jail during a wave of releases late last month — despite the violent nature of her charge — is once again a wanted fugitive, law enforcement officials confirmed to KSAT this week.

Deborah Castoreno, 35, was released from jail March 27 after securing personal recognizance bonds in the October 2019 aggravated assault with a deadly weapon case and in three misdemeanor cases against her.

Personal recognizance, or PR, bonds are typically given to defendants who cannot afford to pay bail, as long as they have gone through a risk assessment and promise to show up for all of their future court appearances.

Defendants charged with serious felony offenses, such as aggravated assault with a deadly weapon, usually do not qualify for release unless they have been held in custody 90 days or longer without going to trial or being indicted.

Advocates say PR bonds can be life-saving in situations where a defendant was accused of a petty crime — like trespassing — but can’t afford to pay to get out of jail until their court date months later. But PR bonds can be a double-edged sword when authorized for violent defendants.

Judge Kevin O’Connell presides over the 227th District Court and authorized the PR bond for Castoreno after a motion was filed by her attorney March 24.

The judge told KSAT that the sweeping COVID-19 pandemic played a role in his decision to approve the bond and was not simply a situation where the defendant had been held for 90 days without the case proceeding to court or a grand jury.

“Accused of a serious crime? Absolutely. But not convicted,” said O’Connell on the telephone Tuesday.

Court records show Castoreno has had 13 criminal cases in Bexar County since April 2016 on charges ranging from felony drug possession to family violence and a previous aggravated assault.

As part of her release in this baseball-bat aggravated assault case, O’Connell said he ordered Castoreno to have GPS monitoring while on full house arrest.

Officials from multiple agencies confirmed this week that Castoreno violated the conditions of her release within two days of getting out.

O’Connell said Tuesday he probably would not approve the bond again, knowing what he knows now.

Bexar County Sheriff’s deputies responded to the 16800 block of Blue Breeze in Elmendorf on October 18, after receiving reports of a disturbance.

Witnesses told the arriving deputies that Castoreno was seen hitting a vehicle parked in a front yard with a baseball bat, according to a BCSO incident report released this week.

After the owner of the vehicle walked outside to confront Castoreno, the suspect is accused of striking the woman in the face with the bat, the report states.

The woman told deputies her eye hurt and she was having difficulty seeing out of it.

Castoreno, who ran away from the scene, according to the report, was taken into custody four days later.

Castoreno was in and out of police custody at least three times last fall, booking records show.

She was also charged last fall with failure to identify herself to a peace officer, evading arrest and resisting arrest, court records show.

The law enforcement search for Castoreno comes as the number of inmates at the jail who should have been transferred to a wide variety of state facilities, including drug treatment centers, has reached close to 200.

RELATED: As SA man remains in jail on nonviolent charge, attorney pleads for his release because of health condition

Among that group is Narciso Garcia, who earlier this month was ordered to go to an Intermediate Sanction Facility, a short-term center where people are detained instead of prison after they have violated parole or probation.

Garcia, a veteran with a serious underlying health condition, had been on parole after serving a stint in prison on a 2017 felony drug possession drug charge in Bexar County, records show.

After missing a meeting with his parole officer late last year, Garcia turned himself into the jail in Feb. 4., where he has remained ever since.

He said he provided members of the Texas Board of Pardons and Paroles an alternative release plan for Garcia during his April 6 hearing at the jail.

Garcia has been accepted into a year-long faith-based counseling and treatment program.

However, the panel voted April 7 to instead have Garcia serve 45 days at an Intermediate Sanction Facility.

“I can understand wanting to hold violent offenders in order to protect the community, but to hold people that have been out and getting treatment and doing what they need to satisfy parole seems like a great injustice,” said Moore.

“He’s scared. Last time we talked there was 10 confirmed cases. Now there are 30,” Moore said Tuesday, referring to the growing number of inmates who have tested positive for COVID-19.

The Bexar County Jail population as of Wednesday was 3,048 people, a BCSO spokeswoman confirmed.

Five of those deputies have made a full recovery and have returned to duty after being medically cleared, a BCSO spokeswoman said.